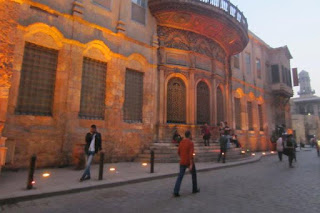 Egypt’s Ministry of Antiquities is to revive the original function of the historic sabil-kuttabs of Islamic Cairo, but with a little twist. These buildings were originally used as public water dispensaries, and they are built of stone and distinguished by opulent foliage and geometric stone designs adorned with stalactite decorations and inscribed with Quranic verses.

Built at crossroads and outside mosques throughout the Mameluke and Ottoman periods to provide drinking water for pedestrians as well as enabling ritual purification before prayer, some sabil-kuttabs have large basins for horses or camels while others have kuttabs (Quranic schools) on their second floors.

During the Ottoman period this type of independent sabil-kuttab structure became a favourite type of urban charitably endowed building, providing economically and efficiently two forms of charity most commended by the Islamic faith: providing water to thirsty people and education to young people.

Mohamed Abdel-Aziz, head of the ministry’s Islamic Cairo Rehabilitation Project, said that the oldest sabil-kuttab in the area was the Asenbogha Sabil at Darb Saada in the Bab Al-Khalq district that dates to 1370 CE.

It was built by the emir Asanbogha who came to Egypt as a child during the reign of the Mameluke Sultan Mansour Ibn Qalawoun as a mameluke slave soldier. He was later significantly promoted and appointed to several top government positions, among them in Alexandria and Aleppo. His sabil has a kuttab and a residential hall for its owner.

Abdel-Aziz said that at the end of the 19th century, in an attempt to preserve these edifices from deterioration, the Comité de Conservation des Monuments de l’art arabe, the Committee for the Conservation of the Monuments of Arab Art, established in 1881 by the Khedive Tawfik to preserve Islamic and Coptic monuments in Egypt, had registered these edifices as well as other historical monuments on Egypt’s Antiquities List.

The sabil-kuttabs were then abundant, though they no longer fulfilled their original functions and were mostly historical attractions visited by tourists.

Time then took its toll on the monuments. Most later suffered from the same classic problems of the leakage of subterranean water, misuse by the area’s residents, structural deterioration and serious environmental damage from air pollution, humidity and decaying foundations, and not least the effects of the 1992 earthquake which caused cracking and the collapse of architectural elements.

“After the restoration of the sabil-kuttabs in Islamic Cairo, the Ministry of Antiquities has decided to resurrect their functions with a little twist,” Abdel-Aziz told Al-Ahram Weekly, adding that using the sabils as water dispensaries would threaten them with deterioration.

But the ministry was aiming to resurrect their original educational function by converting them into cultural centres aiming to foster children’s heritage awareness and enhance their loyalty towards their country and its heritage.

Activities at the centres are targeting children from the area under ten years old and aim at increasing the awareness of these children not only in the field of heritage but also in the arts. They include workshops on painting, handicrafts, theatre, reading and folk art.

Tours of the different monuments of Islamic Cairo will be organised for children, as well as lectures on the monuments they visit. Documentaries relating the old and recent condition of the area’s monuments as well as the restoration work implemented to return them to their original appearance will also be shown.

The activities are to be held in collaboration with the Ministry of Culture and schools in Islamic Cairo.

The restored sabil-kuttabs will be furnished with simple furniture similar to that used during the Mameluke and Ottoman eras in an attempt to maintain their original atmosphere and spirit. The toilets of neighbouring mosques will be used by centre participants instead of the original ones to prevent any leakage of water inside the archaeological monuments.

He explained that the Ismail Maghlawi Sabil consisted of a large rectangular hall with two windows looking onto the Darb Al-Qazzazine. Its ceiling has simple decorations in a geometric design.

In 1933, this sabil was transferred from its original position between the Al-Azhar and Hussein Mosques under a scheme to enlarge the Hussein Mosque. The Al-Bazdar Sabil in Bab Al-Akhdar Street was also moved in 1935 for the same reason.

The latter building was constructed during the Ottoman era by Mohamed Effendi Ahmed Al-Bazdar, “judge of the judges” under the Mameluke legal system. It consists of three floors, one of them devoted to the kuttab.

The Amin Effendi Hezaa Sabil is constructed in Mameluke style in spite of its dating from the Ottoman period. The first of the three floors houses the water cistern, the second the sabil itself, and the third the kuttab. The ceiling of the sabil is of wood ornamented with geometric designs that still show the original vivid colours.

The Abul Eqbal Sabil is located in the Al-Batniya area and was built by a top government official, Arefeen Bek, known by the name of Abul Eqbal. The sabil is constructed in the Ottoman style and consists of two floors. The first is dedicated to the sabil where a cistern is found as well as two windows for drinking. The second floor is divided into three chambers dedicated to the kuttab.

The Zein Al-Abedin Sabil dates to the mid-17th century and is located in Hamam Al-Masbagha Street. It has two floors with two facades and one window.

The Al-Kharbotly Sabil was built by Soliman Al-Kharbotly in 1637 during the reign of Mohamed Pasha. It overlooks the Al-Dardiri and Hamam Al-Masbagha Streets in the Al-Azhar area and consists of two floors, two windows and two facades.

It has a rectangular chamber on its ground floor for the cistern.