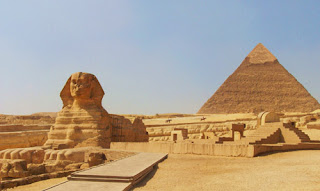 Egypt’s ministries of antiquities and tourism have signed a cooperation protocol to co-managetourist services at archaeological sites all over the country in an attempt to promote tourism.

Minister of Antiquities Khaled El-Enany said that the Giza Plateau will be the first site to be developed within the framework of the protocol.

Ashraf Mohi, the general-director of the Giza Plateau, told Ahram Online that the areas to be managed at the Giza Plateau are to include the Giza pyramids,the visitor's centre, bazaars, cafeterias, sports area, as well as musical performances.

Mohi added that the first phase of the Giza Plateau Development Project, which started in 2010, is about to be completed.

The first phase is financed by the Ministry of Tourism and includes the construction of several edifices including the visitor's centre, administrative offices, and tourism and antiquities police centres.

Paving all the roads around the plateau and those connecting the entrance gate to the exit is also part of the first phase.

The second phase, Mohi said, will begin immediately after the completion of the first one and includes the development of the services area.