Dozens of Tombs and Mysterious Crocodile Remains Found in Egypt


Dozens of Tombs and Mysterious Crocodile Remains Found in Egypt

The human burials and remains were discovered in a site where stones were cut to build the pyramids, and they date to the reign of the 18th Dynasty.

Archaeologists excavating an ancient quarry site in Egypt have unearthed dozens of tombs cut out of rock, child burials, goat and sheep remains and, mysteriously, the full skeleton of a crocodile on the floor of a courtyard.

Announced by Mahmoud Afifi, head of Ancient Egyptian Antiquities Department at the Ministry of Antiquities, the remains were discovered in a 3,400-year-old necropolis that was uncovered in 2015 at Gebel el Sisila, a site north of Aswan known for its stone quarries on both sides of the Nile. Blocks used in building almost all of ancient Egypt's great temples were cut from the site.

The burials date from the reign of Pharaohs Amenhotep II and Thutmose III of the famous 18th Dynasty, which includes some of Egypt's most famous kings, including King Tut.

"So far we have excavated 26 rock-cut tombs dating back to 3,400 years ago. From these burials we have recovered more than 80 individuals of varying ages and sex," Lund University archaeologist Maria Nilsson, director of the Gebel el Silsila Survey Project, told Seeker.

Nilsson and associate director John Ward worked in cooperation with the Ministry of Antiquities as well as Kom Ombo and Aswan Inspectorates under General Directors Abd el Menum and Nasr Salama respectively. 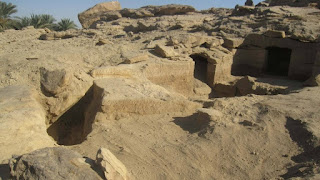 Some of the rock-cut tombs found at Gebel el Sisila. Credit: The Gebel el Silsila Project

Intriguingly, three children were buried in different styles. One child was resting in a crypt cut into the rock, another in a shallow grave covered with stone, while a third infant was wrapped in textile and placed within a wooden coffin with a necklace of beads and an amulet of the god Bes, protector of children.

Two of the three infant burials were located some distance from any other tomb, and so were isolated from their parents or sibling burials, if they existed.

"The accompanying grave goods and the protective amulet suggest that great care was taken with the burial. However, the question arises as to why these children are separated from the main tombs within the necropolis," Ward told Seeker.

In another single chamber room, Nilsson's team found a crypt with a dozen sheep and goats, and a couple of Nile perch. While the fish remains could easily have been brought in with a Nile inundation, it is not clear yet why there were so many sheep and goat remains secreted within the crypt.

"One possibility is that sheep and goats were used in sacrificial offerings in the necropolis," Nilsson said.

More puzzlingly, an almost complete adult crocodile was discovered resting on the floor in the courtyard immediately outside the crypt.

"Its tail was orientated towards the south while its head, which was missing, would have been in the north," Ward said. 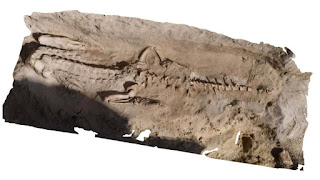 3-D reconstruction of the crocodile found in the necropolis. Credit: The Gebel el Silsila Project

It's unknown why the animal was laying there. It may have something to do with the fact that the main deity of Gebel el-Silsila was Sobek, the god of crocodiles who controlled the waters.

Moreover, Nilsson and Ward discovered another crocodile a little further north laying in a similar position, although this time the tail was pointing north and the head, again missing, lay toward the south.

"We can not verify that these crocs were deliberately placed within the necropolis, or whether they died of natural causes. But to find two in similar circumstances is worthy of further research and analysis," Ward said.

A preliminary study of the vast amount of human remains so far recovered from the necropolis indicates the individuals were generally healthy.

"Very little evidence of malnutrition and infection has been discovered," Nilsson said.

Fractures of the long bones and increased muscle attachments among the skeletal remains indicate behaviors related to a hard labor.

"However, many of the injuries appear to be in an advanced stage of healing, suggesting effective medical care," Nilsson said.

As for the child burials, they clearly reveal that families lived at the quarry site.

"Several child remains show signs of illness, but unfortunately it is too early to state what type of disease or whether this was cause of death," Nilsson said.