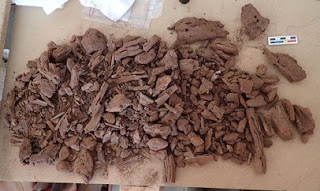 Wood to sift through…

I started with wooden objects this season. Though organic material is generally poorly preserved at Amara West, we have an astonishing amount of wooden remains collected over the years. Almost all of this comes from tombs excavated in the two cemeteries: very little survives from the town.

Much of the material had to be conserved in situ while the excavation was ongoing, as the wood is very damaged due to termites, and being crushed by the collapse of the burial chamber roofs. The tiny wood remains were collected in bags, and we can now spread it out and sift through for distinctive carved decoration or diagnostic shapes that tell us about the original objects 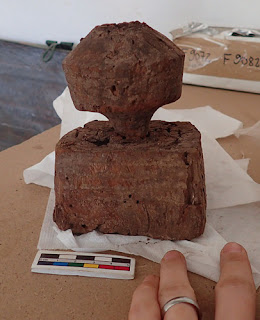 The most interesting objects are the remains of the funerary beds. They seemed to have been very similar to the wooden angareeb beds that are still in use in Sudan today. The frame of the bed consisted of beams around which the stringing of the bed was tightly wrapped: many such pieces have survived and seem to be quite consistent in width and thickness. A few fragments of the actual fibres of the middle part of the bed are preserved as well.

The bed legs comprised three parts: the base itself, at least one middle part and an upper part into which the beams of the frame were inserted into recesses. So far fragments of a smaller and a larger size of terminals have been identified. There also seem to have been sets with cuboid components in combination with cylindrical elements

All of these are decorated in very similar patterns, mostly with horizontal incised lines that run parallel to each other around the components. A few objects show more elaborate patterns such as elongated vertical rectangular fields or zig-zag-lines in the style of the Egyptian hieroglyphic waterline.

In addition, there are a few preserved remains that may be parts of the footboards of such beds, similar to those known from tombs in Kerma. But the famous inlays that were found there have not been found in the Amara West examples. 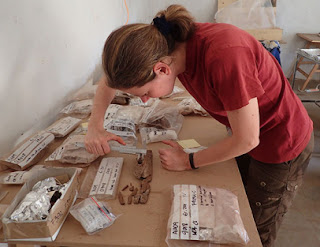 The study of the material has so far lead to the joining together of many more fragments enabling us in the end to determine a minimum number of beds used in the tombs.

Due to the carving elements of the legs the thinnest diameter among the elements is often only 2cm per leg which would likely not have been strong enough to carry an adult person. It therefore seems like some of the beds might have been produced only for the burial itself. One circular element of a wooden bed leg was found in the town as well, suggesting the use of the same designs for the beds of the living. 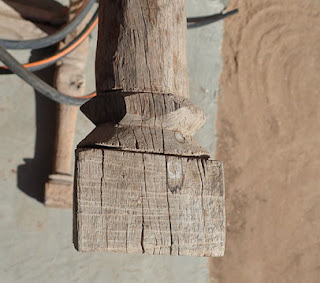 Interestingly, the modern angareeb beds still show many similarities with the ancient versions in terms of decoration, as today incised lines are also often used and the legs mostly end in cuboid parts above which cylindrical components of decoration can be found

Parallels from other ancient cemeteries suggests head-rests and the body of the deceased would have been placed on the beds. Some examples of head-rests can be found amongst the wood from the burials at Amara West: the examples studied so far consist of three parts that were assembled. The base is usually rectangular and quite long and flat with a smaller middle part that tapers into a raised oval shape with a recess. Here the middle part would have combined the base with the top part that had the rounded concave surface that supported the head. Often the bases are decorated like the beds with the pattern of incised parallel lines. In this way the bed and head-rest were built as sets, matching in style. Sometimes more elaborated versions can be found with finer line decoration. 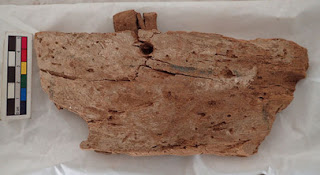 A flat wooden element, perhaps from a coffin

The body of the deceased was quite often placed into coffins or wrapping that was then put onto the bed. Yet it is not easy to identify which of the surviving wooden fragments belonged to the coffin and which to the bed. The coffin fragments often do not have much of their original plaster and paint preserved, with only a few fragments still bearing traces of vivid colours like red, yellow, Egyptian blue or black. Often perforations for dowels and tenons give indications about the techniques used in the woodwork.

Substantial amounts of wooden branches were found that still have their bark on them and therefore were not worked, or at least very little. They are too long to have been used as a dowel and their diameter is too thick. Maybe some of the bodies were wrapped in some sort of matting that was produced with branches and twigs as is sometimes still used in the Sudan for burials of infants.

Even with their fragmentary and often badly preserved state, it is clear that there is a lot to be learned from the study of wooden remains. I am looking forward to more exciting discoveries as I sift through all the material and piece together more fragments!