Mohamed Ali, manager at a hotel in Aswan, said that tourist occupancy should be increasing as Egyptian families prepare for the school holidays 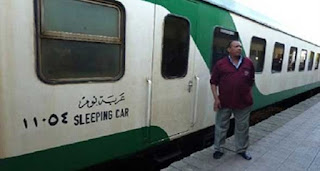 Watania Sleeping Trains and Catering Services Company decided to provide luxurious cabins from Cairo to Aswan and Luxor and back with a capacity of 34 passengers on tourist sleeper trains starting last Sunday to transport tourist groups, according to an official at the company

The official said that travel prices in tourist sleeper trains include $110 for a single room, $80 for a double room, and $40 for a seat for foreigners, while Egyptians will pay EGP 400 for a unified ticket.

The price includes dinner and breakfast from Cairo to Aswan and back. The official added that the company hopes to see an influx of passengers on sleeper trains during the winter.

Mohamed Ali, manager at a hotel in Aswan said that tourist occupancy should be increasing as Egyptian families prepare for the school holidays. He expects hotel occupancy to reach 40% in Aswan and 30% in Luxor hotels.

Hotel accommodation in Luxor rose slightly by 15-20%, despite the increase in hotels operation costs by more than 40%, as well as price hikes on food and drinks.

Ali expects Watania's new service to contribute to price decreases for foreign tourist groups, resulting in an increase in tourism in the region as many tourists go to Luxor and Aswan from Cairo to visit archaeological sites.

Minister of Tourism Yehia Rashed had said in previous press statements to Daily News Egypt that Aswan and Luxor are one of the most prominent tourist areas promoted in the current period in various European markets.

The ministry of tourism has allocated 25% of tourism promotion to Luxor and Aswan since the beginning of last year to raise the occupancy rates in both cities.

Mustafa Waziri, director general of Upper Egypt antiquities in the Ministry of Antiquities, said that launching discounts on sleeper train trips to Luxor or Aswan would encourage domestic tourism traffic and enhance the influx numbers in conjunction with the mid school year holiday .

Director of Abu Simbel antiquities at the Ministry of Antiquities Hossam Aboud said that the number of visitors to the archaeological region at the beginning of the week are usually inconsiderable, and increase gradually by the end of each week, exceeding 1,500 arrivals.

Aboud expects hotel occupancy rates to increase to 70% in February due to the Sun Festival at Abu Simbel, where tourist occupancy rates in fixed and floating hotels in Aswan exceed 30% from varied nationalities such as American, Japanese, and East Asians.

According to previous statements by the Minister of Antiquities Khaled El-Anany, foreign tourism companies inserted visiting Nefertari and Seti l tombs in Luxor in their tourist programmes, after the announcement of the ministry about opening them for visits.

The number of Luxor passes sold since November amounts to 500, generating $50,000 in revenues.

The Luxor pass allows its holder to visit all archeological sites in Luxor governorate over five days at a value of $100. In addition, the state also offers entry passes to other sites such as the Nefertari and Seti I tombs, which costs $200.

Nefertari and Seti I tombs registered revenues worth EGP 1.5m since their opening, receiving 1,579 visitors to the two cemeteries.