Exploring The Temples of Abydos: A Visitor's Guide | PlanetWare 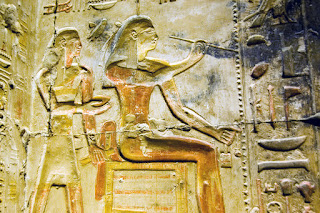 Relief at the Temple of Abydos

Abydos was the epicenter for the pharaoh's cult worship of Osiris and became the most important burial center in ancient Egypt. Here, Seti I raised a glorious temple dedicated to Osiris and a pantheon of other gods that remains a beautiful and unique central point to this necropolis. For travelers interested in the artistry of the Pharaonic period, the Temple of Seti I's colorful wall and ceiling paintings and sculpted column work are a highlight of any Nile temple itinerary and shouldn't be missed. Abydos is 162 kilometers north of Luxor and can easily be visited as a day trip from the city.

Temple of Seti I 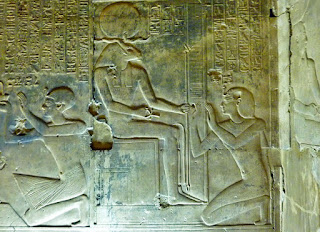 Temple of Seti I

Built of limestone and laid out on three levels, Abydos' Temple of Seti I is unusual in many respects from other Egyptian temples. There are no fewer than seven sanctuaries in the inner temple here honoring Osiris, Isis, Horus, Ptah, Re-Harakhte, Amun, and the deified Pharaoh Seti I. The front part of the temple is thus divided into seven individual temples, each with its own doorway, and the chambers behind the chapels are not arranged behind one another, as in other temples, but side by side. 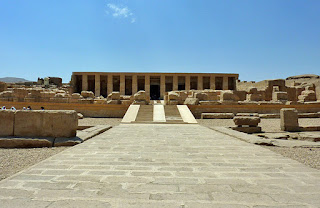 You enter the humongous temple complex from the northeast, through the First Pylon, now in ruins, which leads into the largely destroyed First Courtyard. On the courtyard's southeast wall are scenes from Ramses II's wars and victories in Asia, including the famed Battle of Qadesh (also portrayed at Ramses II's Temples of Abu Simbel) against the Hittite armies. 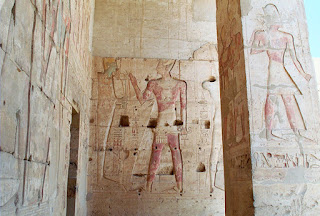 The First Courtyard leads you into the better preserved Second Courtyard. To the right and left, you can see dedicatory inscriptions in the name of Ramses II. On the far side of the court, a low ramp leads up to the temple proper and a Vestibule with 12 sturdy pillars.

Don't Miss On the wall to the left of the main doorway is an inscription in 95 vertical columns recording the completion of the temple by Ramses II. The reliefs depict Ramses in the presence of various deities. Look up to the one scene adjoining the doorway, which shows him presenting an image of the goddess Maat to the triad of Osiris, Isis, and Seti I (here taking the place of Horus). 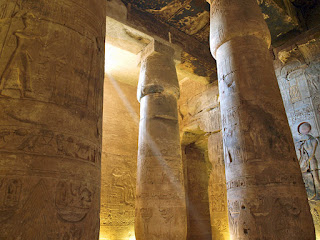 The central doorway guides you into the temple's massive First Hypostyle Hall, the partly destroyed roof of which is supported on 24 papyrus cluster columns with bud capitals. Note how the columns are so arranged that the five central processional aisles leading to the chapels are flanked by two pairs of columns, while the two outermost aisles are bounded on one side by the walls of the hall. 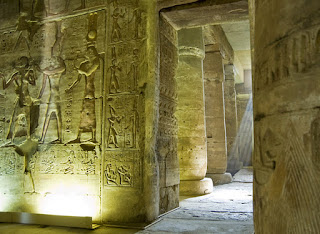 Seven doors corresponding to the walled up entrance doorways, lead into the Second Hypostyle Hall, with 36 columns set in three rows supporting the architraves and the roofing slabs, which rest on them. The arrangement of the columns flanking the processional aisles is similar to that in the preceding hall. The 24 columns in the first two rows have closed papyrus capitals. The columns in the third row, set on a raised platform, are tree trunk columns with cylindrical shafts and no capitals, on which rest stone slabs forming an abacus for the support of the architrave. 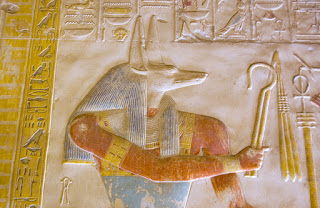 Don't Miss: Here, in the Second Hypostyle Hall, you can see the reliefs dating from the reign of Seti I, which rank among the finest achievements of Egyptian sculpture. 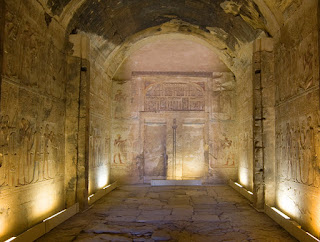 Adjoining the Second Hypostyle Hall, in a direct line with the seven entrance doorways, are seven sanctuaries. The one in the middle is dedicated to Amun, the principal god of the New Kingdom; the three on the right to Osiris, Isis, and Horus; and the three on the left to Re-Harakhty, Ptah, and the King.

A sacred barque, holding the image of each particular deity would have originally stood in each sanctuary. The roofs of each chamber are decorated with stars and the names of Seti I, while the walls are covered with colorful reliefs depicting the ceremonies, which took place in the chapels.

Don't Miss: In the King's Sanctuary look to the left-hand wall to see some of the best-preserved reliefs. On the lower row, from left to right, are scenes depicting three falcon-headed and three dog-headed gods bearing the King into the chapel, preceded by a priest (with the side lock of youth and a panther skin) offering incense. The reliefs then show the King seated on a throne at a banquet, with his guardian spirit behind him and the ibis headed god Thoth in front of him.

The reliefs inside the Sanctuary of Amun are also noteworthy for their well-preserved colors. Here, Seti I is depicted offering sacrifices to Amun in his various forms and burning incense before the sacred barques of Amun. 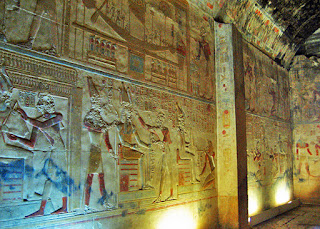 The South Wing contains a slaughter yard, a well, and store rooms as well as a Sanctuary of Ptah-Sokar, the death god of Memphis, which is entered from the Second Hypostyle Hall. The fine reliefs here show Seti I revering Ptah-Sokar, his son Nefertum, and other deities.

Don't Miss: By far the most important feature of the south wing is the Gallery of the Kings, a long and gradually rising corridor, which is entered from the Second Hypostyle Hall. On the right hand wall of the Gallery of the Kings is the famous Abydos King List, which has yielded important information on the sequence of Egyptian rulers. It depicts Seti I with a censer and the Crown Prince, later Ramses II (with the side lock of youth), who is reciting hymns from a papyrus roll. They are revering their royal ancestors, 76 of whom are listed in the two upper rows. The list begins with the first King of Egypt, Menes, and continues to Seti. The names of unimportant or illegitimate rulers are omitted. 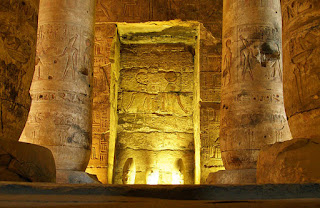 From the time of the First and Second Dynasties (beginning of the 3rd millennium BC), Abydos played an important role as the burial place of kings and high court dignitaries. Here, the rituals for the burial of the dead king and the accession of his successor were celebrated, symbolizing the transitory and recurrent character of all earthly things.

As far back as the Old Kingdom, the cult of Osiris, which originated in the Delta, had managed to gain a foothold at Abydos; with the nearby hill of Umm el-Gaab believed to be Osiris' tomb, and so it's not surprising that Abydos' temples became a vortex for the cult of Osiris.

Several kings of the Middle Kingdom as well as wealthy private citizens erected cenotaphs or stelae here, for to the pious Egyptian, there was no greater bliss than to be buried beside the Tomb of Osiris, or failing this, to have his mummy brought temporarily to Abydos to receive the desired consecration, or at the very least, to recommend himself to the favor of Osiris, lord of the Underworld, by the erection of a cenotaph or a memorial stone. In the mystery plays performed annually at Abydos in honor of Osiris, the eternal terrestrial cycle of death and rebirth was celebrated. Osiris' sister and wife Isis, their son Horus and, under the New Kingdom, Ptah, Re-Harakhty, and Amun were also worshiped here.

Around the Temple of Seti I 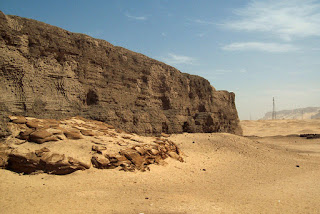 The most important part of ancient Abydos was its extensive Necropolis. Four separate areas can be identified. In the most southerly part of the necropolis, near El-Araba, are the tombs of the New Kingdom, the Temples of Seti I and Ramses II, and the Osireion. To the north of this is a hill containing burials of the Late Old Kingdom. Still farther north, between the Sanctuary of Osiris and the remains of walls at Shunet el-Zebib, are the tombs of the Middle Kingdom, many of them in the form of small brick pyramids; here, too, are burials of other periods, particularly the 18th-20th Dynasties (c. 1500-1000 BC) and the Late Dynastic Period. Finally, in the hill of Umm el-Gaab, to the west, are the royal tombs of the earliest dynasties and the sacred Tomb of Osiris.
ENLARGE MAP PRINT MAP EMBED < > 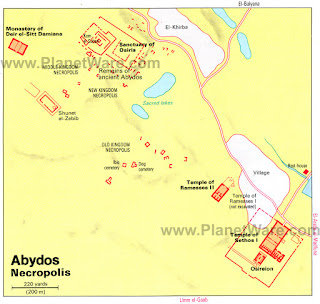 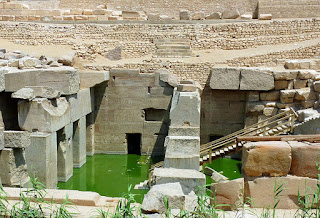 Southwest of the Temple of Seti I, you find the large structure known as the Osireion. Often taken for the Tomb of Osiris, it is, in reality, a cenotaph of Seti I, closely associated with the main temple. It was discovered in 1903 by Margaret A. Murray and excavated between 1911 and 1926 by the Egypt Exploration Society under the direction of E Naville and Dr Frankfort. The building, originally covered by an artificial mound and surrounded by trees, was erected by Seti I, but remained unfinished. Later, some rooms were decorated with religious scenes and inscriptions by Merneptah. The main structure is built of white limestone and reddish sandstone, red granite being used only for the pillars and roof of the main hall and some of the doorways. 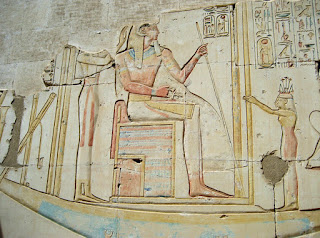 Northwest of the Temple of Seti I, lying partly under the modern village of Abydos, is a Temple of Ramses I, and a short distance away is the remnants of the once grand Temple of Ramses II, also dedicated to Osiris and the cult of the dead King. In front of the present entrance was a large court of which only a few traces remain. The masonry of the temple itself is preserved only to a height of 2m, but it is still possible to trace the outlines of a court surrounded by colonnades with pillars and Osiris figures, similar to those in Luxor's Ramesseum.

The temple was much more sumptuous and more carefully built than any of the other buildings of Ramses II known to us. It was constructed of fine grained limestone, with red and black granite for the doorways, sandstone for the columns and alabaster for the innermost sanctuary. The mural decorations are in delicate low relief with some of the best preserved paintings in the first court depicting a sacrificial procession. The reliefs on the outside of the temple (north and west sides), worked in fine white limestone, are among the finest produced in the reign of Ramses II and depict scenes from the King's war against the Hittites

Northwest of Ramses II's temple are the ruins of Shunet el-Zebib surrounded by an outer and an inner wall of sun dried brick. The complex probably dates from the second Dynasty and may have been a palace.

A few hundred yards northeast of Shunet el-Zebib, near the village of El-Khirba, are the remains of the ancient city of Abydos and the Sanctuary of Osiris, which dates back to the beginnings of Egyptian history. Of the sanctuary, there remains only the brick enclosure walls built during the Middle Kingdom and scanty remains of the temple.