From sexual innuendo to ‘trial’ marriages – the ancient Egyptians were not so different to us when it came to affairs of the heart. In her book, Lost Voices of the Nile: Everyday life in Ancient Egypt, Charlotte Booth explores how the ancient inhabitants of the Nile Valley lived and loved…

Some may think the behaviour of ancient Egyptians is far removed from that of the modern world but when it comes to the basics of love, sex and marriage, their behaviour is rather familiar. They displayed the same doubts, fears and motivations, and all that separates the ancient Egyptians from the modern world is how such emotions were acted upon.

In the modern world, ‘sex sells’ and can at times be considered gratuitous or even taboo. This idea of sex as taboo can be seen as a throwback to the Victorian era, which in itself was a reaction to the lascivious behaviour of the Georgians. However, such embarrassment is not something a typical ancient Egyptian would have understood. To the Egyptians, sex was a life staple, on a par with eating and sleeping and therefore not something to be sniggered at, embarrassed about or avoided.

The Egyptian language for example – like modern English – had many words for sexual intercourse, with the most common being nk. This was used to describe the male agent of the sexual act and was acceptable in daily parlance. Naturally there were sexual euphemisms which could be used in poetry such as; ‘to unite oneself with’, ‘to know’, ‘spending a pleasant hour together’, ‘entering a house’, ‘to sleep with’, or ‘to enjoy oneself with’ and indeed poetry is a remarkable source for learning about the way sexual intercourse was discussed in ancient Egypt.

The art of innuendo

As in modern English, the Egyptians had various words for describing feminine sexual organs including Xnmt (uterus), iwf (flesh), kns (pubic area), or k3t (vulva). Others were more subtle, such as keniw or ‘embrace’. One New Kingdom poem, for example describes romantic intercourse as ‘she showed me the colour of her embrace’. ‘Colour’ was often used as a euphemism for skin and poetry often states such lines as ‘seeing the colour of all her limbs’, or ‘her colour was smooth’. However, not all poetry was as subtle and one young man is described as wanting to ‘charge towards her grotto’ – a metaphor which does not really need elaborating on.

It is often said that nothing is new, and in some cases this appears to be true. The ancient Egyptians also used sexual language to insult, to curse and as general exclamations. To hurry along a work colleague, an Egyptian boatman may have called: ‘Come on, you fornicator,’ as attested in the Old Kingdom tomb of Ti at Saqqara, a phrase considered inoffensive enough to be in the tomb with the deceased for eternity. The only image of a couple making love is a hieroglyphic sign in a Middle Kingdom tomb (c.2000 BC) at Beni Hasan. Unfortunately, due to hundreds of tour guides and visitors touching it over the years, this unique image has long since been worn away. Luckily it was copied in the 19th century so we know what it looked like. 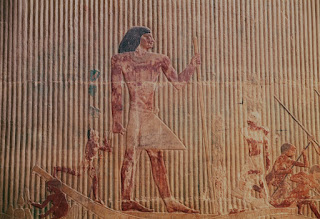 Relief with Ti on his boat, Mastaba of Ti, Saqqara Necropolis, Egypt. The paintings at Saqqara show that the ancient Egyptians also used sexual language to insult. (Photo by DeAgostini/Getty Images)

The artistic scenes which hint at but do not actually show intercourse give the impression that sex was not always a private affair, as there were often servants or children depicted in the vicinity, sometimes even on the bed. Upon examination, the houses at ancient village sites like El Lahun, Amarna and Deir el Medina were indeed small and crowded. Many of the lower-class homes were formed of a maximum of four rooms and a flat roof. However, in these four rooms lived a couple, their children (which, on average, could be as many as ten), unmarried female relatives, unmarried siblings, and grandparents. Being able to find time alone to have sex would have been difficult if not impossible, so it is likely that sex was not necessarily something to be performed in seclusion but through stolen moments, opportunely or quietly whilst others around slept.

Whilst sex was a normal part of everyday life, it was still considered preferable within the confines of marriage. Therefore, it was normal for most people to be married, often at a young age. Many young people entertained thoughts of the opposite sex, and New Kingdom love poetry is filled with sexual and romantic desires in addition to unrequited love. These poems also provide insight into the cultural practices of the time. For example: “He knows not my wish to embrace him, or he would write to my mother.” This suggests that should a young man wish to marry he was required to speak to the girl’s mother to get permission.

Once permission was obtained, marriage was a straightforward affair with no religious or civil ceremony; the woman simply moved into her husband’s house, perhaps accompanied by a procession through the streets and a party, though there was nothing ceremonial or official.

On occasion, it was the man who moved into the woman’s house, and there is a rather charming inscription of one man’s failed attempt at marriage. Twice he packed his belongings with the intention of moving into his beloved’s house, only to be rejected on the doorstep. He laments at the lack of interest, claiming she would not “provide clothing for his backside”. It would be fascinating to know the background to this relationship and why he tried to move in with her only to be rejected twice. Did she change her mind at the last minute? Or did he misinterpret their relationship? Sadly, we may never know. 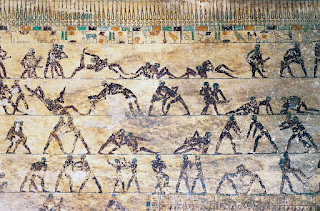 Fight scenes on the walls of Kethi tomb, Beni Hasan, Egypt, where the only image of a couple making love was found. Unfortunately, due to hundreds of people touching it over the years, this unique image has long since been worn away. (Photo by DeAgostini/Getty Images)

A ‘year of eating’

For the majority of the population, marriage was undocumented. The couple simply started cohabiting. However wealthy couples would often draw up contracts outlining the financial consequences of a divorce. Even more intriguing, however, are the documents which describe temporary or trial marriages: “You will be in my house while you are with me as a wife from today the first day of the third month of the winter-season of the sixteenth year, until the first day of the fourth month of the inundation season of the seventeenth year.”

This temporary marriage was known as a ‘year of eating’ and enabled the couple to try out the marriage, enabling a quick exit should there be no children during this time or if they decided it was not working.

Married life in ancient Egypt was hardly different to those of today, and a married couple had many of the same concerns: essentially raising, feeding and providing a home for their family. Even when in the first throes of love, ancient Egyptians acted the same as any modern love-struck teenager. One New Kingdom poem explains how simple tasks are impossible due to love: “It makes me not act sensibly… It lets me not put on a dress, nor wrap my scarf around me.”

Couples in love also gave each other cute nicknames such as ‘The cat-like one’, ‘The much sought after one’, and ‘She (who is) hot-tempered like a leopard’.

However, not all ancient Egyptian marriages were perfect and the medical papyri suggest that men would often consult a doctor due to sexual problems within their marriage. Numerous prescriptions were available for the husband to entice his wife: “Take dandruff from the scalp of a dead person who was murdered, and seven grains of barley, buried in the grave of a dead man, and crush with 10 oipe of apple pips. Add the blood of a tick from a black dog, a drop of blood from the ring finger of your left hand and your semen. Crush it to a compact mass, place it in a cup of wine … and let the woman drink it.”

There is little doubt that it would be difficult to persuade an disinterested wife to drink such a potion, but if she did, it was believed she would fall hopelessly in love with her husband again. This then required the next step, which was to grind acacia seeds with honey and “rub your phallus with it and sleep with the woman”. Should this not work, the man was advised to: “Rub your phallus with the foam of the mouth of a stallion and sleep with the woman.”

‘Hold back the hasty heart…’

Marriages however, dissolved for a number of reasons, with the most common being lack of children or adultery. Although women should not desire sexual intercourse, it was stated that adultery was “the large crime that is (usually) found in a woman”. It is not surprising that both sexes were in fact guilty of this. Both men and women committed adultery, and both men and women were able to instigate a divorce due to this. Adultery was so common it appeared in the Book of the Dead in the so-called ‘Negative Confession’, where the deceased denied doing things considered illegal or socially unacceptable. It is in the latter category that adultery fell, and the Instruction of Ani (21st or 22nd dynasty c.1000 BC) advises new husbands to: “hold back the hasty heart. Do not go after a woman; do not let her steal your heart.” 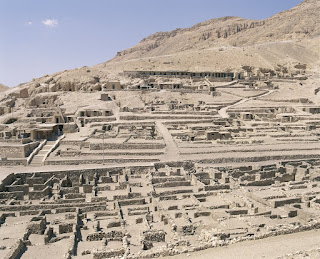 Such advice sometimes fell on deaf ears, as with a Deir el Medina bad-boy named Paneb. He was accused of adultery with various women in the village, including a woman called Hunro. Hunro was unfaithful to two husbands, first to Pendua and then to her second husband Hesysunebef; both husbands divorced her. Surprisingly, Paneb’s wife Wabet did not divorce him for his extra-marital sexual exploits.

Whilst divorce was generally granted for adultery, if the husband wished it he could call for his adulterous wife to be severely punished, in some cases with mutilation or execution. Such harsh punishments, however, were generally the plots of literary tales, and divorce was easier and more common in the real world.

Both men and women could divorce the other, with the man simply saying: ‘I throw you out,’ or the woman saying to him: ‘I am leaving,’ or either spouse claiming: ‘I divorce you.’ The divorce was generally as simple as a wedding, and the woman would move out of her husband’s house, either returning to her father’s home or even to a home of her own.

Being divorced held no social stigma and both men and women remarried and many went on to have large families. However, if a woman divorced when she was older than 30 years old, she was unlikely to get remarried. At this age, she would be considered to be elderly and unlikely to bear any further children. This does not mean they became marginal to society; there were a group of unattached women living at Deir el Medina, who have been identified by different scholars as divorced or unmarried women, if not prostitutes, although the evidence is not conclusive either way.

When dealing with affairs of the heart, whether in the modern world or in ancient Egypt, there is a lot of information that is simply not recorded. We are able, to a certain degree, to piece together an idea of how the ancient inhabitants of the Nile Valley conducted their relationships and their approach to sex and relationships. But whilst it is certainly incomplete, it is all familiar – the ancient Egyptians were not so different to us when it came to relationships; they lived, loved, married and divorced.