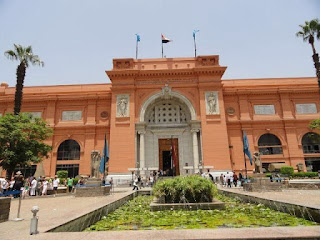 The Egyptian Museum, located in Tahrir Square, will host an exhibition entitled “Egypt.. The Cradle of Religions”, on the sixth anniversary of the January 25th revolution.

Elham Salah, head of the museums sector, said the exhibition will last from one to two months. It will contain around 70 artifacts that express religious tolerance, she told Al-Masry Al-Youm.

“The relics that will be displayed will be transferred from the Coptic and Islamic art museums, in addition to other relics that are kept at the Egyptian Museum,” she added. “The museum will include Coptic artifacts with Islamic decorations and the opposite, which shows effect of both civilizations on each other.”

Meanwhile, Sabah Abdel Razeq, general director of the museum, said the museum employees are currently working on preparations from the exhibition; adding that it will be held at the temporary exhibitions hall no. 44 on the ground floor of the museum.

According to her, a project is being carried out at the basement of the museum to develop it and register the antiquities kept there in accordance with the records of the missions.

“We have only 20,000 registered relics at the basement out of thousands of relics. We have been working on registering and documenting the relics for a long time, but such a process will take time, because of the enormous number of relics to be found there," explained Abdel Razeq.