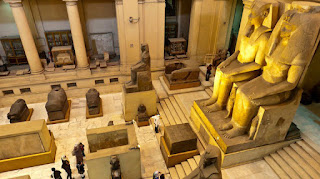 The Ministry of Antiquities' affiliated museums have achieved total revenues of $45m with 974,400 visitors in 2016.

According to a statement by the ministry's museums division, the museums achieved the highest revenues in December, recording EGP 6.8m with 117,000 visitors, while the lowest revenue reached was $1.7m in June with 21,800 visitors.

Minister of Antiquities Khaled El-Anany told Daily News Egypt that the number of visits of museums and archaeological sites has increased during the recent months starting from October which coincide with the winter season, when the tourist flow increases in Egypt.

The museums' total revenue in September recorded EGP 3m with about 76,000 visitors, compared to EGP 4.2m in October with 70,900 visitors.

The revenues jumped in November recording EGP 5.7m with 94,700 visitors, and continued its growth to EGP 6.8m in December with a total of 117,000 visitors.

The number of the museums affiliated to the Ministry of Antiquities is 31 across the country, including 21 open-air museums and eight under-development museums, as well as two closed museums.

The closed museums are El-Arish and Beni Suef museums, while the ministry is still developing the Greek Roman museum, the Port Said museum, the Ahmed Orabi museum, the Tanta museum, the museum of Tanis, Rommel Cave museum, Mohamed Ali museum in Shubra, and the Royal Vehicles museum in Bulaq.