The Tabnit sarcophagus is the tomb of the Phoenician king Tabnit of Sidon and the father of King Eshmunazar II that is decorated with two different as well unconnected inscriptions which is one in Egyptian hieroglyphics and the other in Phoenician script. The script had been created during the early 5th century BC and was discovered by Osman Hamdi Bey at the Ayaa Necropolis near Sidon in 1887 together with Alexander Sarcophagus and other related sarcophagi.

The body of Tabnit was found floating and was totally preserved in the original embalming fluid and both the sarcophagus together with Tabnit’s decomposed skeleton are presently in the Istanbul Archaeology Museums. The sarcophagus, together with the Eshmunazar II sarcophagus was probably attained by the Sidonians after their participation in the Battle of Pelusism which served as models for later Phoenician sarcophagi.

Tombs near Sidon were found by the American Presbyterian minister William Kind Eddy, father of William A. Eddy. William Wright had sent a letter to The Times with the information on the discovery of Eddy asking the British Museum to take immediate measures in securing these treasures and refrain them from falling into the hands of the vandal Turk which alerted the new curator of the fledgling Istanbul Archaeological Museum, Osman Hamdi Bey who arranged for a full excavation as well as the transfer of the sarcophagi to Istanbul. 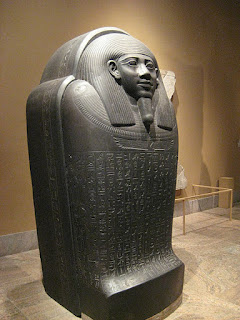 At the time of the excavation, the workmen who had opened the Tabnit sarcophagus and found the human body floating in perfect preservation in a peculiar fluid had overturned the sarcophagus pouring the fluid out when Hamdi Bey was at lunch.

Thus the secret of the mysterious fluid was hidden in the Sidon sand. However, in 1892, Hamdi Bey observed that he had kept a part of the sludge which remained in the bottom of the sarcophagus. The Phoenician language inscription is known as KAI13 and the Egyptian hieroglyphic inscriptions indicate that the sarcophagus was initially proposed for an Egyptian general called Pen-Ptah. The Phoenician language inscription when translated by George Rawlinson states –


The Tabnit sarcophagus as well as the Eshmunazarr II sarcophagus is considered to originate from the 26th dynasty of Egypt having it capital at Sais which is partially due to its resemblance to similar sarcophagi like the Psamtik II era Horkhebit sarcophagus from Saqqara presently in the Metropolitan Museum of Art.