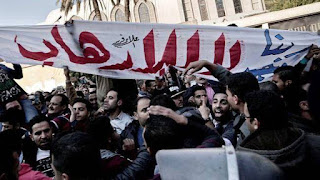 On Dec. 11, a bomb ripped through the chapel in the St. Mark's Cathedral complex, the seat of Egypt's ancient Coptic Orthodox Church. It killed 27 people and wounded another 49, one of the deadliest attacks on the country's Christian minority in recent memory.

Responsibility for the attack was claimed by the Islamic State, though the Egyptian government blamed the outlawed Muslim Brotherhood.

Divisions have widened in recent decades between Egypt's Sunni Muslim majority and the Coptic Christian minority, who account for about 10 per cent of the country's 92 million people.

Pope Tawadros II, spiritual leader of Egypt's Orthodox Christians, says attacks against Christians have occurred on average about once a month over the past three years. In too many instances, the police don't investigate.

Egypt's Christians have long complained of discrimination, saying they are denied top jobs in many fields, including academia and the security forces. The Egyptian parliament in August passed a law imposing restrictions on construction and renovation of churches.

The Egyptian Initiative for Personal Rights counted 77 incidents of sectarian violence between 2011 and 2016 in Minya governorate south of Cairo, home to Egypt's largest Christian community.

Egypt saw a previous wave of attacks by Islamic militants after July, 2013, when the military under Abdel-Fattah el-Sisi overthrew President Mohamed Morsi, a freely elected leader and a senior Muslim Brotherhood official.

Many of his supporters blamed Christians for supporting his ouster. Scores of churches and other Christian-owned properties in southern Egypt were ransacked that year. The army and the police made little attempt to intervene.

Some 38 churches were looted and torched, while 23 others were attacked and heavily damaged in one week. According to the Coptic Orthodox and Catholic churches in Egypt, 160 Christian-owned buildings were attacked.

Two years earlier, a New Year's Day 2011 bombing at the Saints Church in Alexandria killed 21 people. That year, 28 Christians were killed in clashes with the military outside the Egyptian Radio and Television Union building in Cairo. They were protesting against an attack on another church.

In 2006, there were days of clashes in Alexandria between Copts and Muslims after a Copt was stabbed to death in a knife attack on three churches.

Under the Egyptian monarchy, Copts were relatively secure. But they faced increasing marginalization after the 1952 coup led by Gamal Abdel Nasser. His pan-Arabist ideology had little room for a community that felt little affinity with the larger Muslim Arab world. He also nationalized many businesses owned by Copts.

Increasingly, Egyptian Christians are speaking out against the government, ignoring the wishes of the church.

On Sept. 19, during Sisi's visit to New York to address the UN General Assembly, 82 Copts signed a public letter protesting the church's widespread support of Sisi and expressed frustration that the situation for Christians in Egypt has not improved.

Some went so far as to say it is worse than under Hosni Mubarak, the dictator overthrown during the Arab Spring in 2011.

Two days earlier, Tawadros had stated that media outlets were publishing false news about relations between Copts and Muslims.