The Ministry of Antiquities has taken various decisions this year to restructure its budget and increase its financial self-reliance, writes Nevine El-Aref 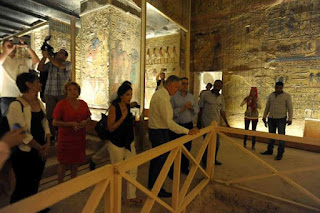 Since the 25 January Revolution and the subsequent decline in tourism, the Ministry of Antiquities has been facing many challenges, on top of them a lack of budgetary resources. This has led to the postponing of some archaeological projects, especially in the museums sector, and problems in the maintenance and restoration of monuments.

Minister of Antiquities Khaled Al-Enany told Al-Ahram Weekly that in the past the ministry’s budget was mainly dependent on ticket sales from archaeological sites and museums all over the country and exhibitions of artefacts abroad.

But there has been little investment policy to feed the ministry’s budget, and though this policy was sufficient when the tourism industry was growing and the number of tourists reaching its peak, with the decline in tourism and the increase in the ministry’s employees the ministry entered financial deadlock.

The ministry has lost around LE1 billion of its annual income, which decreased to just LE275 million in 2015. Its debts since 2011 have reached almost LE6 billion, as it has had to borrow from the Ministry of Finance in order to pay its employees and for postponed projects.

Bazaars and cafeterias at archaeological sites and museums have also closed their doors because of the decline in tourism, meaning that the ministry has lost a good deal of its income.

“To help solve these budgetary problems the ministry has taken several decisions to restructure its finances and create alternative financial resources to replace the tourism sector’s declining revenues,” Al-Enany said.

He said that decreasing the rental of bazaars by up to 70 per cent and cafeterias by up to 60 per cent, as well as offering facilities to franchise-holders to help them pay their debts, had been one solution. The ministry had succeeded in recovering 40 per cent of its debts, instead of zero per cent five years ago, he said. Reopening bazaars and cafeterias had also provided job opportunities for young people, as well as facilities to tourists at archaeological sites.

The ministry has discounted publications published before 2012 by 70 per cent, giving 25 per cent reductions on those published after 2012. “This was also designed to encourage reading and to increase archaeological awareness,” Al-Enany said, adding that the ministry had lowered the fees charged for filming for cinema or television at archaeological sites by 50 per cent.

“This should attract more international film directors to come to make their films in Egypt instead of other countries as well as providing more money,” he said.

A number of archaeological sites have been opened after restoration or reopened after several years of closure in an attempt to attract more tourists to the country and restore the tourism industry. Among them is the Unas Pyramid in Saqqara, which was reopened last May after 20 years of closure.

The pyramid is the last one to be built under the Fifth Dynasty. Despite its small size, it is considered to be one of the most important, as it is the first pyramid to contain the famous “Pyramids Texts” which contain important religious directions on the resurrection of the deceased.

French Egyptologist Gaston Maspero was the first to enter the pyramid in 1881, which was closed in 1996 as a high rate of humidity had negatively affected the pyramid’s burial chamber.

After comprehensive studies, state-of-the-art equipment was installed to monitor and decrease the level of humidity and heat inside the pyramid and a new cool lighting system was installed. The minister explained that the reopening was part of the ministry’s plan to open more archaeological sites and new tourist attractions in order to restore Egypt’s tourism industry.

The Egyptian Museum in Tahrir Square in Cairo has been opened at night twice a week on Sundays and Thursdays from 5:30pm to 9:00pm at a double ticket price.

The Malawi Museum in Minya has been reopened after three years of closure for restoration and rehabilitation. The museum was damaged in August 2013 during clashes between supporters of deposed former president Mohamed Morsi and the security forces after the latter broke up the sit-ins in the Rabaa Al-Adawiya and Al-Nahda squares in Cairo. Some 1,049 of the museum’s 1,089 artefacts were reported missing, while those that were too heavy for vandals to carry away were damaged in situ.

Elham Salah, head of the Museums Department at the Ministry of Antiquities, said that the majority of the artefacts had been recovered, handed in by Malawi residents, or left at the museum’s gates after the ministry had declared an amnesty on the return of any looted artefacts.

Salah added that the two-storey museum building had also been overhauled and its indoor decoration and design renewed. The new design concept of the museum provides a broader educational service to visitors. It informs Egyptian visitors about how their ancestors built a great civilisation, showing Minya residents’ daily lives in ancient times, their industries, handicrafts and culture.

The Kom Aushim Museum in Fayoum was reopened after 10 years of closure. Salah said that the Kom Aushim Museum was originally built at the entrance of Karanis in 1974 to illustrate the history of Fayoum as well as the daily life and funerary practices of its ancient inhabitants from the prehistoric to the Islamic period.

The museum was originally a single-storey building, but in 1993 a new floor was added. In 2006, it was closed for restoration. At the time of its closure, she said, the museum was in a bad condition and was in need of restoration. The restoration project included the installation of new security and lighting systems, the replacement of old showcases, the extension of the museum’s external iron fence, and the building of new control towers. The facade and walls were also polished.

The museum now exhibits not only its previous collection but also other artefacts that were stored in Fayoum stores or on show at the Egyptian Museum in Cairo.

The King Farouk Corner overlooking the Nile in Helwan was also reopened after five years of closure due to the lack of security in the aftermath of the revolution, Salah said, adding that labels were put on every artefact and piece of furniture while the garden around was developed to be used as an area for seminars and cultural events with a cafeteria.

The Farouk Corner was originally opened by king Farouk, Egypt’s last monarch, in 1942 to be a family rest house on the Nile in Helwan south of Cairo. It is a boat-shaped edifice with three floors and a basement containing the kitchen and servants’ quarters. The house itself is decorated on the inside with Pharaonic decorative elements and furniture. A replica of the Luxor and Karnak Temples is on the house’s balcony, while three replica mummification beds are in the hall.

In the northwest of the Dakhla Oasis in Egypt’s Western Desert, the Al-Kasr village was reopened after 15 months of restoration.

Al-Enany described the restoration work as “wonderful” and “one of the ministry’s most important achievements”. He said that the village was one of the most important Islamic settlements in Egypt, not only because of its distinguished architecture but also because it was the meeting point of several routes as well as being on a main road for trade and pilgrimage.

The village itself was built in the 12th century during the Ayyubid period on the remains of an earlier Roman settlement in order to serve as the capital of the Dakhla Oasis. It was in a defensive position facing marauding invaders from the southwest. Stone blocks from the earlier Roman settlement can still be seen in the façades of village houses, probably reused from older ones.

Al-Qasr was extended under the Ottomans and was built like all mediaeval towns in Egypt at the time, with narrow covered streets divided into quarters, districts and alleys that were closed with gates at night to protect them from invaders.

“After the inauguration of all these sites, the ministry launched different types of annual and temporary cards that enable visitors to visit archaeological sites across Egypt,” Mustafa Al-Saghir, a member of the ministry’s technical office, told the Weekly.

Among these are annual cards for foreigners who are residents of Egypt. The card costs $390 or 360 euros and includes the tombs of Seti I and Nefertari (or $290 or 260 euros without the tombs). Annual cards are available to Egyptians and Arab residents for LE4,000, or LE150 for university students and LE100 for school students.

“The ministry has also launched a special card for archaeological sites and museums in Luxor named the Luxor Pass,” Al-Saghir said, explaining that the cards were valid for five days for foreigners during their stay in Luxor.

“I have other ideas in mind to provide unconventional ways of financing, and I think that this could be achieved through planned investment and management services at archaeological sites, such as printing the logos of organisations on the backs of tickets, finding sponsors to organise exhibitions, and publishing ads on the ministry’s website,” Al-Enany said.