A silent, deserted, Amara West seen from the river-side dunes

After 9 seasons of daily pre-dawn Nile commutes, the clatter of excavation tools scraping against pottery sherds and the climatic extremes of the site – chilly mornings, howling winds, plagues of nimiti-flies and hot, dry afternoons – this is going to be very different.

Our excavation house will be the setting for the whole team. Where once the house was brimming with up to 30 specialists, and deluged daily with pottery, finds, sample bags, skeletons – alongside drawings, digital images and other documentation – it is now a spacious oasis of calm, with only seven of us here to start this study season, alongside our cook Ali Dal. 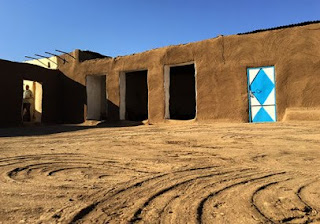 The dig house on Ernetta island

With over 10,000 objects, and many many more pottery sherds, this is our opportunity to lay out similar types of objects, or arrange them in groups depending on which room, house or neighbourhood of the town they were found in. We then consider what needs drawing or photographing. Most crucially we have the time to think about the artefacts, pore over them, and try to understand how they were made, how they functioned, and how some were modified or re-used. Later will come library time, to research parallels, and eventually the writing up. But now is the time to compare objects, turn them over, hold them in a different light, try joining fragments. 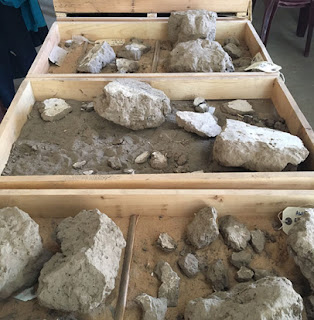 The dusty mud fragments in these wooden trays are the only remnants of a colourful niche – probably a shrine – in house E13.7

I've been working on a series of painted and moulded mud fragments that I think came from a household shrine in house E13.7, while elsewhere in the same room Manuela Lehmann has been examining fragments of the funerary beds (angareeb) found in the cemetery, as Nora Shalaby studies the flint blades and tools.

In the adjacent courtyard, the salon – the old house's reception room – is home to Valentina Gasperini analysing pottery, Elisabeth Sawerthal drawing a range of finds, and Shadia Abdu Rabo. Shadia is combing through the jewellery excavated since 2009. Meanwhile, Elina Rodriguez – familiar with another era of Amara West excavations – is deep in the cool and dark finds storeroom, resolving numbering problems and registering artefacts from last year. 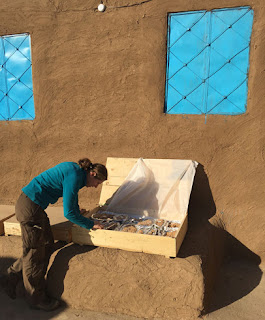 Even without excavations, there'll still be discoveries and insights, and we'll post some of our findings in the coming weeks. That is all subject to our internet connection, which is much worse now than in 2009, despite an array of dongles and smartphones that confidently proclaim "3G".

Meanwhile, we'll wonder if the traditional four meals a day – including an archaeologists "second breakfast" at 11am – really is a good idea for this studious yet sedentary season.