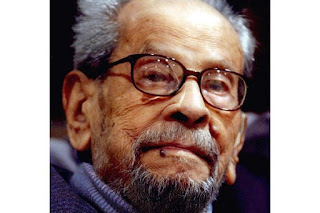 The Egyptian novelist Naguib Mahfouz (1911-2006) was one of the greatest novelists ever to have written about ancient Egypt. It is not strange that he was a big fan of ancient Egypt, as even when he was a child his mother used to take him on visits to the ancient Egyptian monuments in Cairo, especially those in the Egyptian Museum in Tahrir Square.

At the end of his high school, Mahfouz translated a small book called "Ancient Egypt" into Arabic, which was published in Cairo in 1932. In his first collection of short stories, published in 1938, he included stories set in ancient Egypt such as "A Voice from the Other World" and "The Mummy Awakens".

The Wisdom of Khufu is set in the time of the Pharaoh Khufu, the builder of the Great Pyramid at Giza, the only remaining wonder of the ancient world. Mahfouz based his novel on the stories contained in the Westcar Papyrus, now in the Egyptian Museum in Berlin, called "King Khufu and the Magicians."

This ancient Egyptian narrative contains five tales about miracles performed by priests and magicians told to Khufu by his sons at the royal court. The most important is a prophecy detailing the beginnings of the Fifth Dynasty and the transfer of power from the family of Khufu and his successors.

Rhadopis of Nubia is the second novel in Mahfouz's early Pharaonic trilogy. It is based on a beautiful woman, Rhadopis, who lived on the island of Elephantine, very close to the modern city of Aswan. Several elite members of the Egyptian society of the time fell in love with her, even the king himself. However, the queen was wise, while the king was foolish. At the end of the novel, the corrupt king is killed and Rhadopis commits suicide.

Thebes at War is concerned with the struggle to expel the Hyksos, the rulers of the hill countries, out of Egypt. This period is called the Second Intermediate Period in ancient Egyptian history and lasted from 1750 to 1530 BCE. Several pharaohs of the 17th Dynasty fought against the Hyksos occupation, and in the end they were expelled by Ahmose I to Palestine.

The literary critic Sayed Qotb, later the intellectual godfather of the Muslim Brotherhood, was one of the first critics to write about Mahfouz, and he liked this novel very much, even recommending that it be put on Egyptian school syllabuses.

In 1983, Mahfouz published a book called Before the Throne in which he examined the rulers of Egypt from the country's beginnings to the time of former president Anwar Al-Sadat. He included some of the rulers of ancient Egypt in the book.

In 1985, he returned to ancient Egypt to write a novel about the Pharaoh Akhenaton called Akhenaten, Dweller in Truth. In this novel, probably among those planned by Mahfouz to tell the story of ancient Egypt in narrative form, Mahfouz describes Akhenaton (Amenhotep IV) and his times through the eyes of those who lived in them. The novel is constructed in a new way, and it reproduces the opinions of those who lived in Akhenaton's time.

The novel is controversial, and it seems that Mahfouz neither liked Akhenaton nor his times nor the religious revolution which Akhenaton introduced and forced the people to follow. Many novels have been written about Akhenaton; however, the novel of Mahfouz about this heretic king remains among the best because it is the most inspiring.

Mahfouz never completely abandoned writing about ancient Egypt, and there are some insights into it in his later works. Overall, his writings on ancient Egypt reveal that Mahfouz was a great lover of it and its amazing civilisation and believed that Egypt and its people could be great as they were in ancient times if they were ruled by a great ruler.

It was also important, he thought, for the people to have confidence in that ruler and to follow and support him if they were to realise their dreams for their beloved country Egypt.