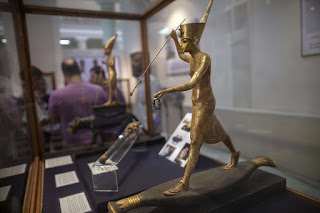 An inventory of artefacts at a number of museums’ stores was held by 160 commissions affiliated to the Ministry of Antiquities across all governorates.

Elham Salah, head of the Antiquities Ministry’s Museums Section, said that the ministry has formed 200 commissions to conduct a stocktake of artefacts at all museums in Cairo and other governorates.

She told Daily News Egypt that the ministry has formed 100 additional commissions several months ago to help in the inventory, bringing the total number of commissions to 300.

Salah continued that these commissions also observe the delivery and receipt of the artefacts from one storage space to another. They record and document the artefacts by collecting data of the museums’ records, and each of them may include more than one artefact.

Salah pointed out that the ministry is working on creating an electronic linkage between museums and the activation of databases to ease conducting inventories of artefacts in the coming years.

The parliament’s Tourism Committee filed a briefing request to the Minister of Antiquities Khaled El-Anany to hold an inventory of Egyptian artefacts in the current period.

She added that the inventory has been delayed due to the presence of a large number of records and artefacts at the stores which have not been inventoried for a long time, prompting the ministry to form urgent committees.

Said Helmy, head of the Islamic and Coptic Artefacts Department, said that her department is waiting for the approval of the Supreme Council of Antiquities’ decision to register all Islamic, Coptic, and Jewish artefacts, so that they may form a committee to record and document the artefacts urgently.

She added that the registration is expected to take a few months after the approval of the Supreme Council of Antiquities.

According to Helmy, there are 1,030 Islamic artefacts, 88 churches, and 11 synagogues registered at the Ministry of Antiquities.

He pointed out that this decision will put all the buildings, mosques, monasteries, and synagogues under the supervision of the Ministry of Antiquities and subject to the Egyptian Law on the Protection of Antiquities.