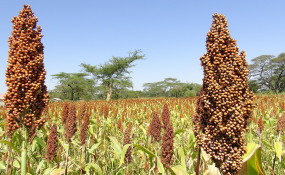 Sorghum has always been closely associated with the culture of the Sudan. Sorghum, as a basic element in the nutrition of Sudanese, has a lofty record in the daily life, traditions and beliefs of the people of this country.

According to Dr. Mahmood Bashir, Chief Inspector of antiquities at the National Corporation for Antiquities and Museums, sorghum is known in Sudan as early as the Nubian Kingdom of Kush (785 BCE-350 CE) as sorghum drawings were found in the ancient brightly colored pottery unearthed in the Berber Cemetery, North of the country.

He said drawings of sorghum crop ears were also found in the drawings of King Shorkaror of Meroe in Jebel Gaili East of Khartoum (Meroe is the second phase of Kush Kingdom). In one of these drawings, the King is seen receiving a bundle of sorghum ears from a God, in a ceremony for the repatriation of prisoners of war. All these monuments date back centuries before Christianity.

Signs of the presence of Sorghum were also found in different excavations. In Kuwa (East of Dongola) sorghum was found in ancient dwellings, a signal that it had a role in the nutrition of ancient Sudanese. In Tangasi sorghum grains were found in artifacts representing burial ceremonies. That is an indication of the importance of sorghum in the local beliefs and traditions.

Dr. Bashir said the cultivation of sorghum was known even earlier in Kassala, in the East of the country, during the Modern Stone Age according to recent excavations.

Of late American researcher Jeremy Bob has found a clue that the Kush Kingdoms had relied on sorghum in their nutrition. Bob had translated an ancient hieroglyphic text that showed the Kushites had used to consume sorghum porridge. The text shows that the ancient Egyptians had used to refer to other ethnicities by the type of food they ate. In the text the ancient Egyptians had referred to the Kushites as eaters of porridge.