Chariot and clothes of Egypt's Tutankhamun transported to GEM The Grand Egyptian Museum (GEM) is receiving another three artefacts of the King Tutankhamun collection — a chariot and two of his shirts, from the Egyptian Museum in Tahrir Square.

The collection of King Tutankhamun is being transferred to the Grand Egyptian Museum (GEM) ahead of its soft opening in 2018.

Tarek Tawfiq supervisor general of the GEM, told Ahram Online that the chariot is the third to be transported to the GEM. Tutankhamun had six chariots. He explained that the move comes within the framework of an Egyptian-Japanese project between the Ministry of Antiquities and the Japanese International Cooperation Agency (JICA) to pack and transport 71 artefacts now on display at the Egyptian Museum to their new permanent exhibition spaces in the GEM.

Tawfik said that among the 71 artefacts was a collection of reliefs of founder of the ancient Fourth Dynasty Senefru and a collection of 65 objects from Tutankhamun's funerary collection, including three funerary beds, five chariots and 57 pieces of textile. 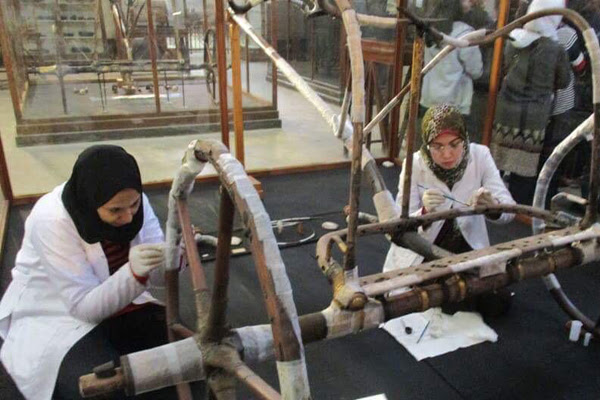 Director of first-aid restoration at the GEM, Eissa Zidan, said the restoration team had consolidated the wooden surfaces of the chariot as well as weak points in joint areas. The chariot, he said, was packed and transported as one item with the chair of the throne.

Zidan pointed out that the artefacts were padded with special materials to absorb any vibrations during transportation. State-of-the-art technology and modern scientific techniques had been used in order to guarantee the safe lifting and moving of the chariot from its display case at the Egyptian Museum. The team had also used acid-free packing materials.