Dr. Mostafa Waziry (Secretary-General of the supreme Council of Antiquities) announced that during their ongoing excavations, the Swedish-Egyptian archaeological mission (Lund University), headed by Dr. Maria Nilsson and John Ward in co-operation with the Ministry of Antiquities represented by Mr. Abdel Manem Saed (Director of Aswan Antiquities), discovered several intact child burials as well as crypts and chambers for adults in the 18th Dynasty Necropolis at Gebel el-Silsila in the Aswan region. 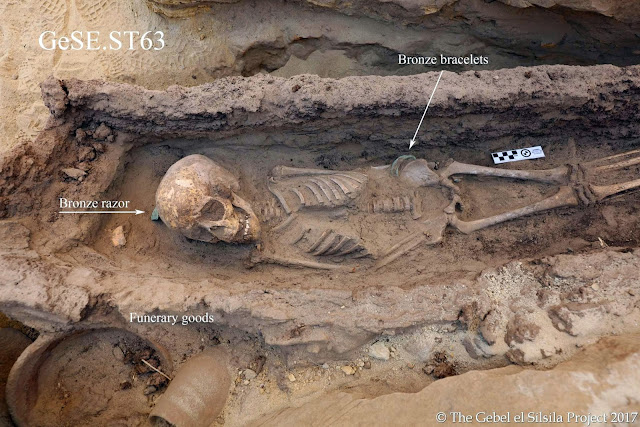 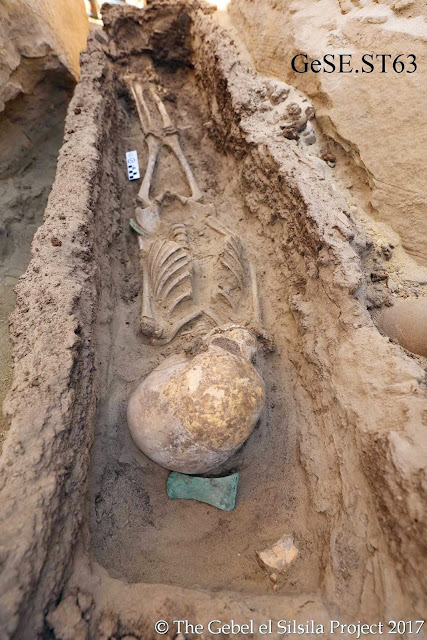 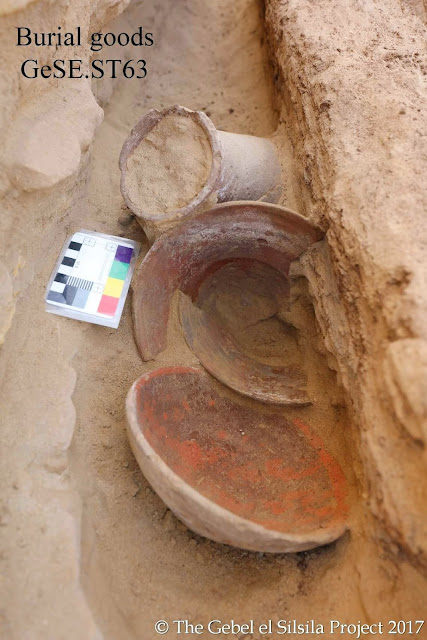 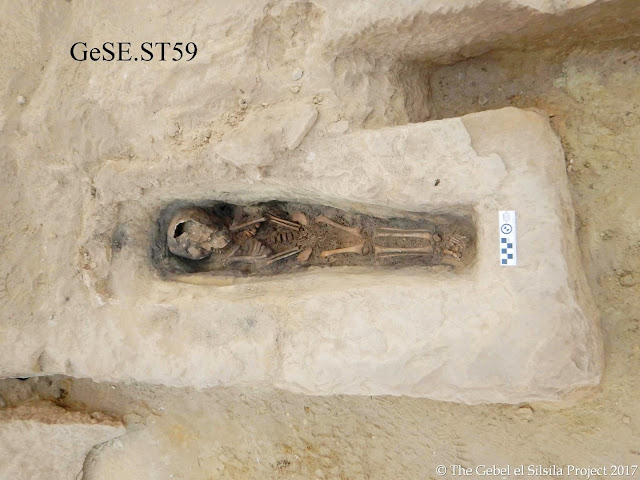 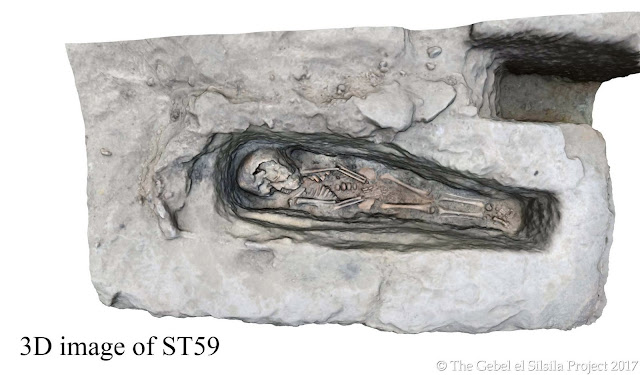 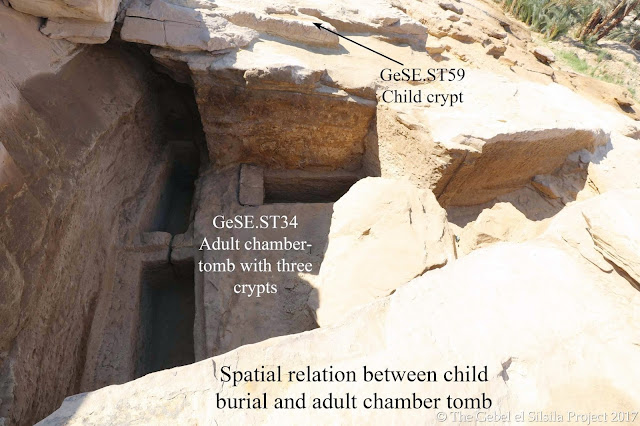 3) Inhumation of a child (ST64), c. 5-8 years, oriented with head in the east, unknown facial direction due to later disturbance of the head, possibly caused when burying the child of ST63. Body wrapped in linen and laid on reed matting. Burial goods included three scarabs, one of which contained a royal name of Thutmosid period, and a single ceramic vessel not in its original location.

4) Inhumation of child (ST69), c-5-8 years, oriented with head to the north, facing east. Buried without any obvious care in quarried area, and covered with quarry spoil. No immediate relation with surrounding tombs. Several intriguing pathological indications of sickness. Further studies required. In addition to the intact child burials, the team has discovered several new crypts and burial chambers, mainly looted during or since antiquity. 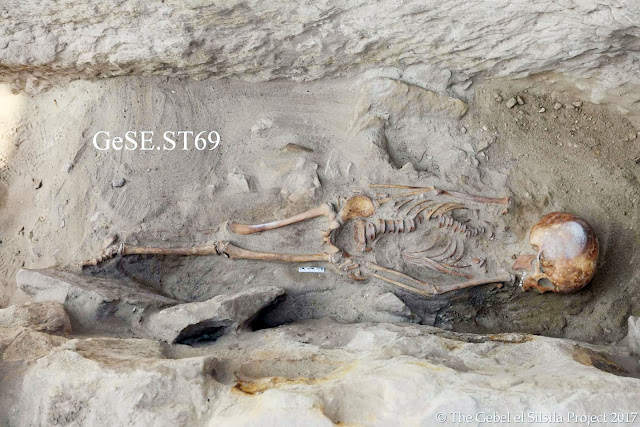 The archaeological material includes bones, ceramic vessels, jewellery, textile, 'plaster', and wood.  The intact child burials – some unique and others first of their kind at Gebel el-Silsila with their burial goods in situ, adds important insights into the local and contemporaneous funerary customs, pathological information (general health and injuries of the entombed) and add clues into the social and economic organisation of the site during the Thutmosid period, supporting the theory of individuals and entire families involved with quarry work states assistant director John Ward. 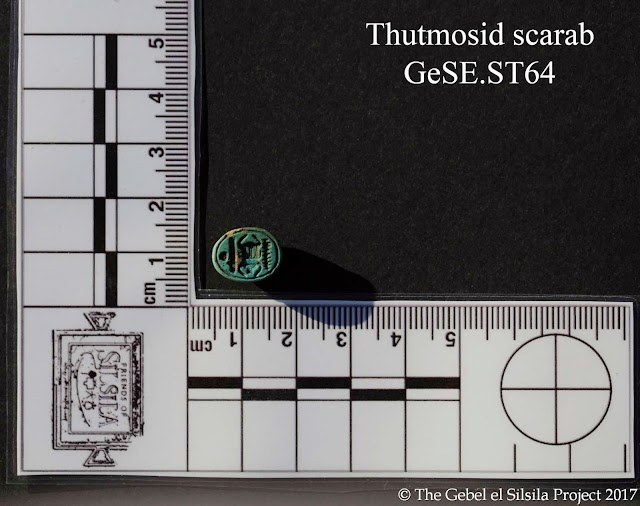 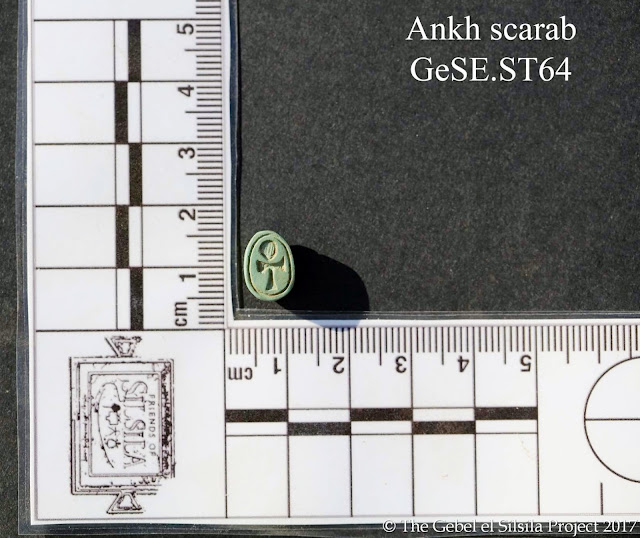 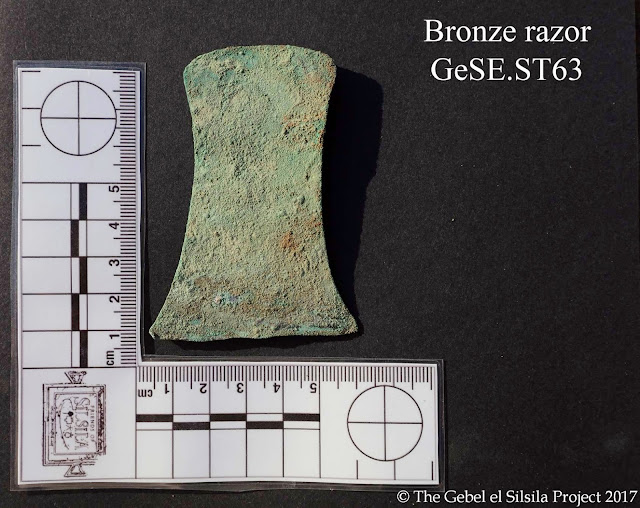 Mission Director, Dr. Maria Nilsson adds that the finds follow a line of recent discoveries made by the team, all which date to the Thutmosid period, including

1) An usurped relief scene in the Speos of Horemheb, showing a large ship carrying an obelisk, comparable with the scene of Hatshepsut in Deir el-Bahari;
2) six statues and relief scenes within shrines 30-31 from the reigns of Hatshepsut and Thutmosis III; and 3) decoration and architectural details in limestone from the initial building activity of the Temple of Sobek on the East Bank. Together with the most recent discoveries in the Necropolis, all these finds reveal the importance of Gebel el-Silsila during the Thutmosid period, blooming with socio-political and religious activity.


Funding for this fieldwork has been provided by a grant from the National Geographic Society (grant # HJ-103R-17), Gerda Henkel Stiftung, and the Royal Swedish Academy of Letters, History and Antiquities.