A critically endangered wading bird revered in ancient Egypt has an officially greater headcount on the heels of its most recent breeding season.

We're talking here about the northern bald ibis (aka hermit ibis or waldrapp), which – with its raw featherless head and dark bristly ruff – looks something like a long-billed vulture (or, for those Jim Henson fans among you, a little like one of those scratchy-voiced Skeksis from The Dark Crystal).

In late November, BirdLife International announced that two new rookeries of the northern bald ibis have been documented along the Atlantic coast of western Morocco, boosting the number of known breeding pairs to 122.

Biologists and conservationists are cheering the news, which suggests that the protection afforded the bird in the country by the Moroccan government and BirdLife has facilitated ibis dispersal from established, closely monitored breeding colonies – in Souss-Massa National Park and the small town of Tamri – to settle new ones. The recently discovered coastal rookeries lie north of Tamri. 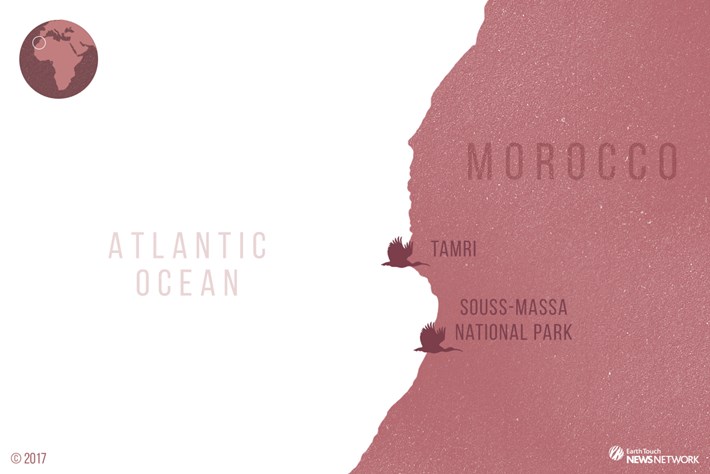 Today, nearly all wild northern bald ibises are found in Morocco, mostly in closely monitored breeding colonies: one in Souss-Massa National Park and the other in nearby Tamri. The newly discovered colonies lie to the north.

"The importance of this news is that, with a steady population increase, northern bald ibis are now exiting their 'comfort zone' of the guarded sites, giving us a lot of hope for more similar discoveries," said Jorge F. Orueta of SEO/BirdLife.

Today, nearly all wild northern bald ibises call Morocco home. But the species once ranged continuously from North Africa to Central Europe and the Middle East. The birds' arresting looks, elegant flight and predilection for mythic and desolate landscapes – seaside cliffs, desert wilderness, high-country moors, ruins – seemed to guarantee they would specially resonate in human consciousness across that realm.

The ancient Egyptians honoured the black bird as a "psychopomp" (a guide to the afterlife for souls of the recently dead); its image can be recognised in a 4,500-year-old hieroglyph in the Temple of Horus in Edfu. In the Old Testament, Noah sent out the ibis from the Ark early on to herald fertility. And south-bound ibis migration over the Arabian Peninsula came to be associated with the annual Muslim pilgrimage to Mecca, the hajj.

Reverence and symbolism didn't save the ibis from a multi-headed anthropogenic onslaught in the modern era: overhunting, habitat loss, pesticide poisoning and other threats have made it among the most endangered birds in the world. Since at least the early 1900s its domain has been cleaved into distinct western and eastern populations.

The Moroccan birds belong to the western population, which doesn't migrate. The eastern population, meanwhile, annually journeyed between breeding sites in Western Asia and wintering grounds in the Ethiopian Highlands, but was thought to have effectively gone extinct in the wild by 1989. That's when scientists converted the last ibises of a dwindled Euphrates River colony in Birecik, Turkey, to a managed, non-migratory, semi-captive existence in order to safeguard them.

In 2002, however, a tiny free-ranging holdover of the eastern stock – just seven birds – was located in the Syrian Desert at Palmyra. As Dr Gianluca Serra, a conservation biologist who studied that relic flock, noted in The Last Flight of the Ancient Guide of Hajj, the discovery was likened to "the 'Tutankhamun's tomb' of Arabian ornithology". 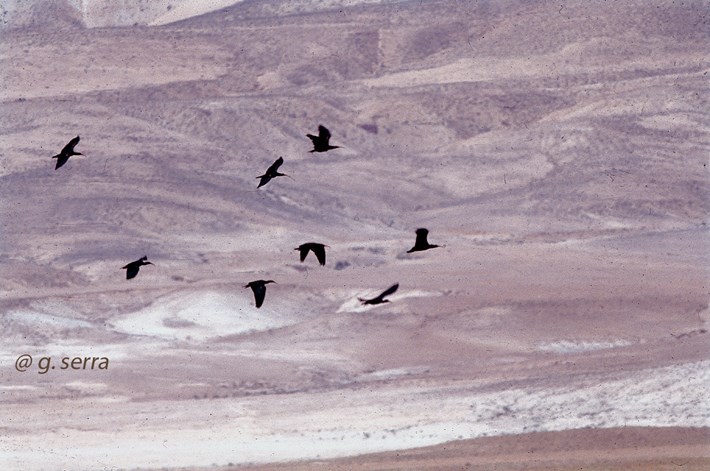 Northern bald ibises in Syria. Sadly, the Palmyra flock is no longer in existence. Image: Gianluca Serra, used with permission

Satellite tags allowed scientists to track these ibises to wintering quarters in Ethiopia – confirming the ancient migration geography – but also revealed the vulnerability (especially of juveniles) to bullets and power lines along the route on the Arabian Peninsula.

Sadly, the Palmyra flock – minuscule to begin with, highly vulnerable to mortality along the migration corridor, and eventually caught up in the multi-year Syrian Civil War – now appears to be lost. "We can safely say that breeding of the Palmyra colony finished in 2013 and the last bird seen [there] did not come back in 2015," Serra told me in an email. He said a few ibises have since been seen in Ethiopia. "[They're] possibly immature birds who do not know the migratory route back to Palmyra."

More than 1,000 northern bald ibis exist in captivity, and – as the recent news out of Morocco represents – there's hope the wild population could both grow in number and expand in territory. Someday, the Birecik ibis colony may again be able to migrate rather than shelter in aviaries for the winter, and meanwhile, ambitious reintroduction programmes are aiming to restore the bird in Europe after centuries of absence. Proyecto Eremita has already founded a wild population in southern Spain, while the Waldrappteam conservation project and its partners are working to establish a migratory flock between the Alps of Germany and Austria and wintering refuge in Tuscany – with the birds learning the route, à la whooping cranes, by following an ultralight aircraft.

Keep up with this super-rare, super-cool bird's status via BirdLife and the International Advisory Group for the Northern Bald Ibis. You can also download Dr Serra's photo-book "The Last Flight", chronicling the both miraculous and doomed Syrian ibis colony, right here.