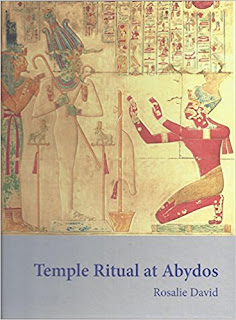 It was great to be back at the Mummification Museum for a lecture. There is another on Thursday at 7pm Dr Francisco Martin-Valentine talking about Amen-hotep, Huy Tomb AT 28. And another on Sunday at 5pm subject to be announced.

Tonight's lecture was live streamed on Facebook by Moamen Saad if you check his Facebook page https://www.facebook.com/moamen.sca you will find it.

Prof Rosalie David – The Temple of Sethos at Abydos – Analysing the wall scenes and decoration.


Prof David has been working on mummified remains at Manchester but her PhD was on the subject of Abydos.

Abydos is central to Egypt not only geographically but religiously because of the cult Osiris. It wasn't that long since the Amarna period and Seti wanted to reaffirm religious orthodoxy and the legitimacy of his line. Her PhD was to analyse the decoration and assess whether it was just pictorial or ritual. Although it is now accepted as ritual, back in 1967 this was not known.

Island of creation
The ancient Egyptians believed creation started with an island emerging from an expanse of water. There was a stick in the island and a bird alighted on it and all temples were based around this concept and follow the same pattern. Except Abydos is different it is L shaped with several sanctuaries. The Osirion is the cenotaph of the god. Rosalie believes that it originated in the Old Kingdom because of its similarity to Chephren's temple.

Scenes can either be formal depicting historic events, e.g. battles, royal family members and coronation or they can be cultic rites. Abydos has mortuary depictions with the addition of Osiris rituals.

In First and Second courts the pylons have gone and the roof has been concreted over in the hypostyle hall so the view looks very different. The decoration is by Ramses II, the courts were open and the scenes are propaganda and historic showing battles, royal princesses and depicting him as the pious son of Seti.

The many columns are not needed to support the structure; they are representing the plant forms on the island of creation. The decoration is formal showing the king and the gods. It provides a processional way to the sanctuaries. There are 6 sanctuaries which means there are 6 chances to observe the ritual. They can be compared to other temples and papyrus like the Berlin papyrus which had 66 rituals of Amen.

An interesting side point is because the priests and their families partook of this rich diet of meat and alcohol they suffered side effects. Atherosclerosis which was thought to be a modern disease has been identified and Rosalie has written an article published by the Lancet.

As well as these rituals for the statue the sacred bark would have been censed. Additional there is the ritual of the royal ancestors or Amenhotep I. We have temple reliefs, stele and papyri describing this. This took place in the left part of the temple, the extra rooms, the 7th chapel and the gallery of the lists. The suite of rooms Nefertem Ptah Sokar Hall and rooms was an important part of this. In the hall of barks there was a sandstone ledge that was used for barks and offerings.

The corridor of the bull was decorated with magical/mythological scenes not ritual. In this area you also have the foundation of the temple scenes. One room, the butchery room was separate from the rest for pious reasons.

The Osiris Mysteries took place in the Osirion and Osiris complex. The raising of the Djed pillar is the most notable part. The second Osiris hall is the hall of life.

Doing the analysis
Rosalie had to look at who was in the scene what they were doing and what they were saying. The entire temple had to be transliterated, Sequence had to be established and finally identify the function and use. There was a lot missing so it was a difficult task. The results were originally completed in 1971. A 2nd edition was published in 1981. In 2016 it was revised and has ALL translation, line drawings, transliteration and plates.