‘My highlight of 2017’: A portrait head of Ptolemy VIII | Christie's 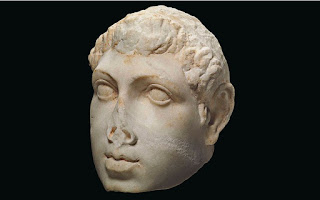 Max G. Bernheimer, Head of Antiquities in New York, reveals the bloody history behind an unassuming marble likeness of the ancient Egyptian king, sold in October

'Literary sources describe Ptolemy VIII of Egypt as a terrible man who enjoyed a lavish lifestyle,' says Max G. Bernheimer, International Head of Antiquities at Christie's. Grotesquely overweight, he was given the nickname Physkon, which roughly translates as 'pot-bellied', or 'fatty', explains the specialist.

Following the death of his brother Ptolemy VI Philometor in 145 BC, Ptolemy VIII stormed the city of Alexandria. 'He married Philometor's wife Cleopatra II — who happened to not only be Ptolemy VIII's sister-in-law, but also his actual sister,' says Bernheimer.

The strength and length of the sculpture's fresh provenance piqued interest. At auction the head fetched $612,500 — more than six times its low estimate

Growing weary of Ptolemy VIII's tyranny, the people of Alexandria revolted, pulling down statues of the king, such as this Greek-style example. Ptolemy VIII fled to Cyprus with his new wife, blaming the uprising on the elder Cleopatra. 'Seeking revenge, he had their only child killed, dismembered and sent to her in a box as a birthday present,' Bernheimer explains.

This sculpture was offered at Christie's as part of a collection belonging to the renowned Egyptologist William Kelly Simpson (1928-2017). Simpson had acquired it at auction in 1986, where it was sold by an art adviser to John D. Rockefeller III. The adviser had in turn acquired it from a New York-based dealer, whose archive provided Bernheimer with provenance dating back to 1947.

The strength and length of the fresh provenance, together with a history of recent exhibition loans to the Metropolitan Museum in New York and the British Museum in London, piqued institutional interest. At auction the head fetched $612,500 — more than six times its low estimate. The buyer was revealed to be Yale University, Simpson's alma mater and the school where he had taught future generations of Egyptologists. 'It's a real prize for Yale,' observes Bernheimer.