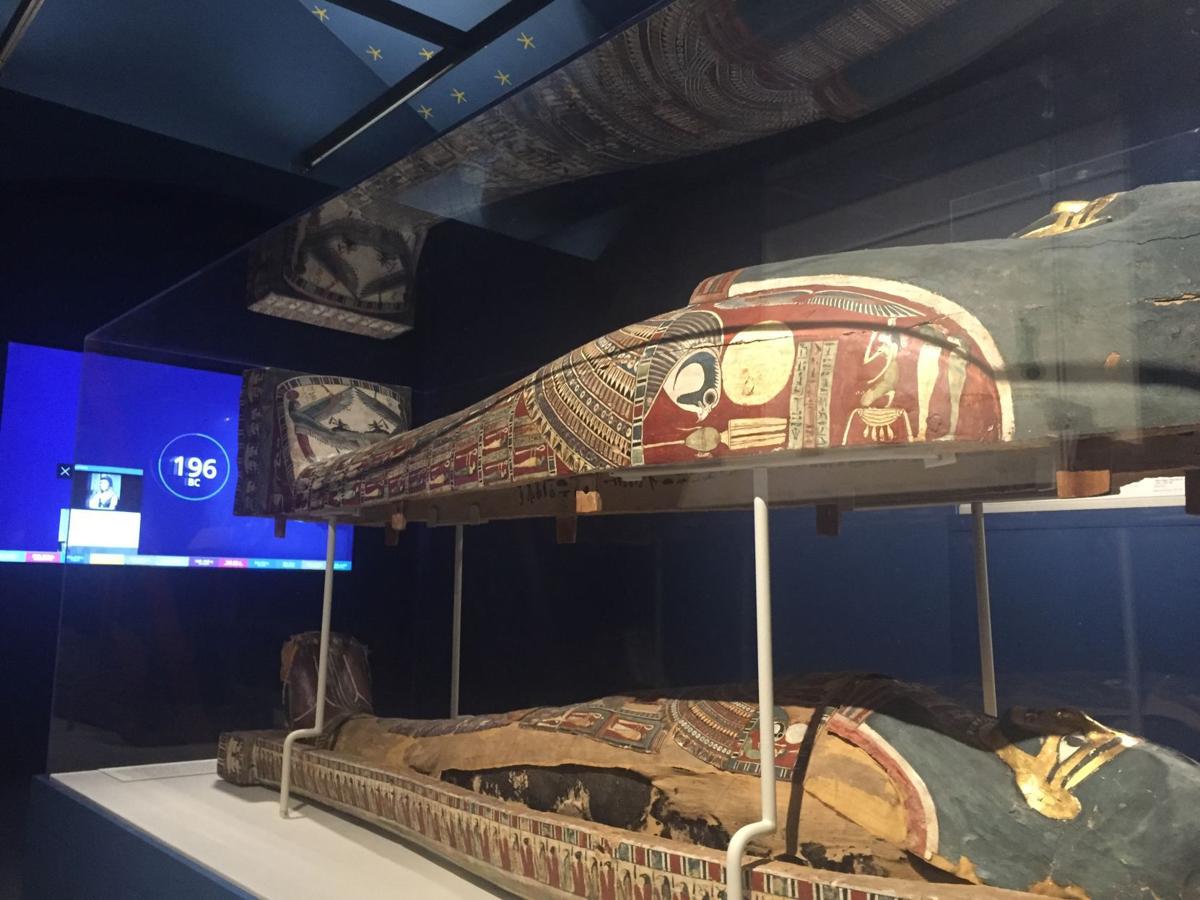 Starting Friday, a trip to see the mummies and Egyptian artifacts at the St. Louis Art Museum will not include an odd detour through the period rooms of 18th-century French and English furniture.

Their new home on the third floor of the art museum will be easier to find, and you'll know you're in the right space as soon as you go up the stairs or step off the elevator. Floor-to-ceiling hieroglyphics cover the space surrounding the doorway.

"It's like putting the milk in the back of the store," Lisa Çakmak, the associate curator of ancient art, said on Tuesday during a tour of the new space. "People need it, they will ask for it and they will find it."

The Egyptian artifacts' skylight-lit home on the museum's first level was always meant to be temporary, but they ended up staying for about 10 years, she said.

The North American premiere of 'Sunken Cities' will be the most significant exhibition of ancient Egyptian art undertaken in St. Louis in more than 50 years.

The old gallery will house a Modern and Contemporary Craft and Design installation, which opens Jan. 18. The new Egyptian gallery used to showcase prints, drawings and photographs, but it was often closed and used for storage.

The new Egyptian space is bigger and allows the museum to display about 100 objects as opposed to the 80 or so in the previous space. Three mummies lie along the spine of the long, narrow room, with cases of objects lining the walls.

In addition to peeking at the exposed toe wrappings of the mummy Amen-Nestawy-Nakht, visitors will be able to use a 55-inch touchscreen to explore images of CAT scans taken of the mummies in 2014 at Barnes-Jewish Hospital.

The images show things that earlier X-rays did not, like the threads connecting the beads of an elaborate headdress worn by the museum's female mummy, Henut-wedjebu.

"One thing I want people to bring away from this is how much time (is included in) ancient Egypt," Çakmak said. "This collection covers nearly 5,000 years of one part of a continent."

In fact, we are closer in time to Cleopatra, who died in 30 B.C., than Cleopatra was to the time of the pyramids, she said.

Also new to the space: a fragment of a coffin lid with hieroglyphics that tell the story of the journey to the afterlife, a collection of glassware that reflects daily life in a village called Karanis and a Graeco-Roman vase made in a typical Roman shape with a typical Egyptian material called faience.

The gallery will augment another Egyptian exhibit coming to the museum March 25: "Sunken Cities: Egypt's Lost Worlds." It's the North American premiere of a show that focuses on underwater discoveries made over the past seven years, including 16-foot-tall sculptures and artifacts from the lost cities of Thonis-Heracleion and Canopus. That exhibition will be on view through Sept. 9.