Hello again from the "Other Artifact Lab"! It's been a while since we've checked in here from Kaipure's tomb chapel and a lot has changed in Lower Egypt since the summer. Since June, we have been working to clean and stabilize the painted limestone walls of the Old Kingdom (2415-2298 BCE) mud-brick mastaba tomb chapel for a high-ranking Egyptian official named Kaipure. In the winter of 2015-2016, conservators Emily Brown and Madeleine Neiman worked to disassemble the tomb chapel wall from its wooden 1920s support and performed triage treatments (read more about that here) to keep the blocks safe from vibrations caused by construction next door. This past spring marked the start of the current phase of the project: cleaning and stabilizing the blocks so they can be moved to off-site storage in 2018. 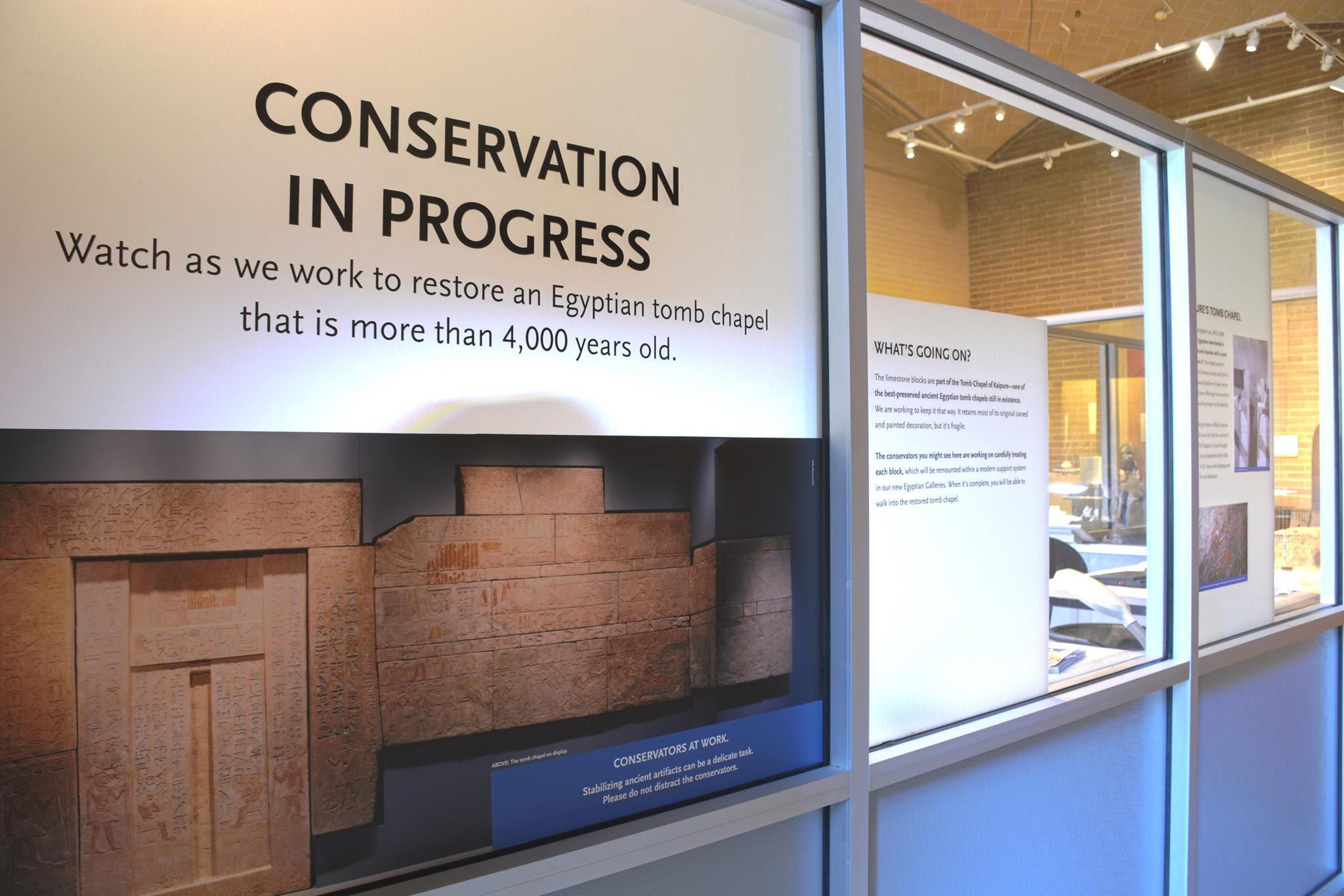 If you've been through the Lower Egypt (Sphinx) gallery recently, you may notice some new and familiar faces in the lab. While Céline Wachsmuth and I (Anna O'Neill) have been working on the wall since June, in September we were joined by a third project assistant, Jonathan Stevens. 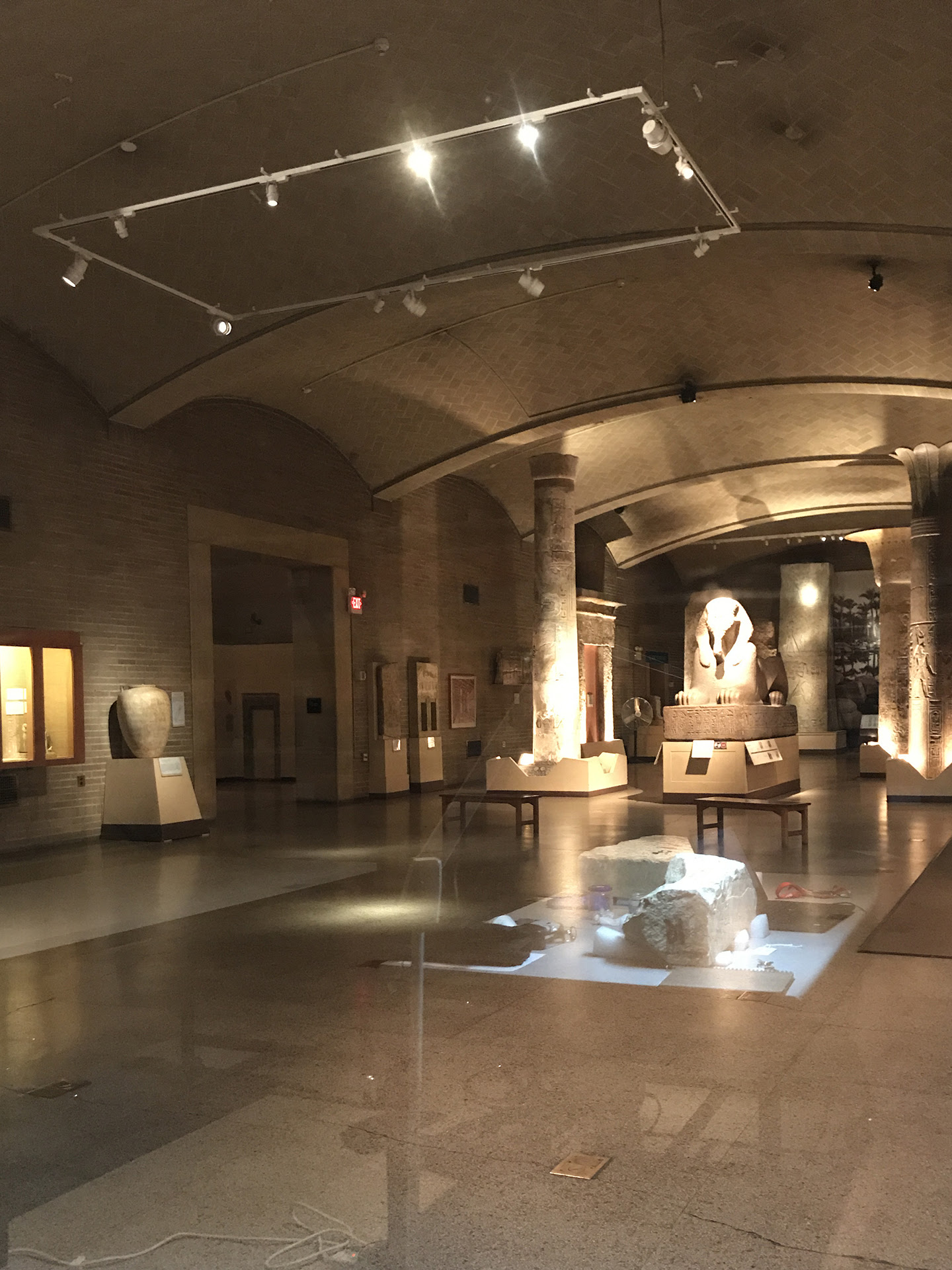 The view from our lab space, with two of the blocks reflected in the foreground. We may be biased, but we think we've got the coolest lab-mate around.

Between all of us it's been a very busy fall! We've continued to clean and stabilize each individual block from the wall, becoming familiar with some different techniques for cleaning, consolidation, infilling, and documentation, as well as repair methods used by the ancient Egyptians (more on these later). Dr. David Silverman, Curator-in-Charge of the Egyptian Section, stopped by to tell us a little more about the history and imagery of the chapel. We're also improving our proficiency in fork lift handling as we move the pallets supporting the very heavy stones. Just a few weeks ago, we reached a very important milestone – we officially passed the halfway point, with more than half of the 59 blocks stabilized for their move off-site next year. 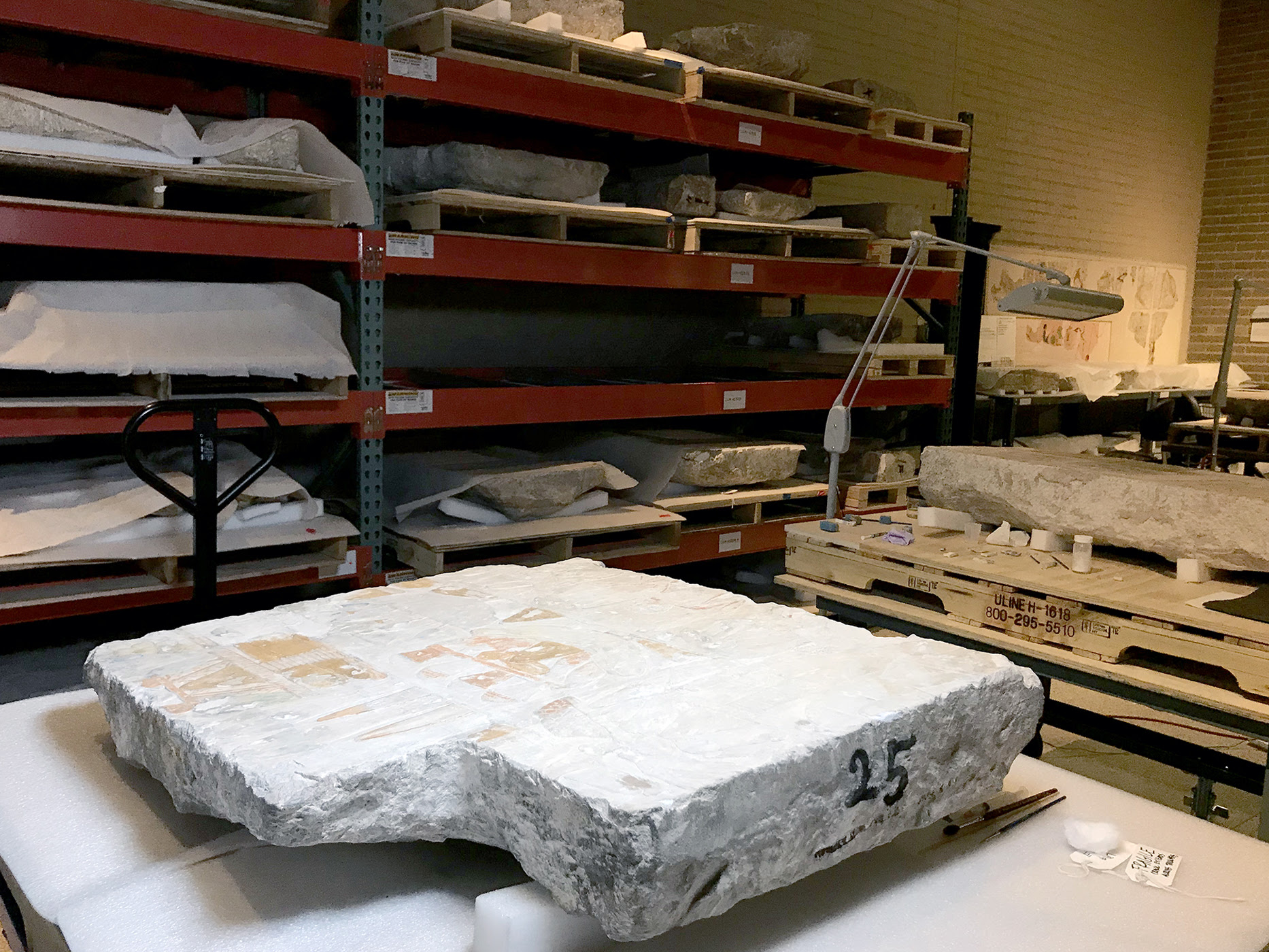 A view inside the lab. The largest blocks (up to 700 pounds!) are housed on the red shelves along the back wall; the ones covered in tissue are cleaned, consolidated, and ready to move off-site.

If you find yourself in Lower Egypt any time soon, you are welcome to come watch us work in the lab and read more about the history of Kaipure's tomb chapel (on our new, informative signage!). While we don't have open window sessions downstairs, we do occasionally find ourselves in the main Artifact Lab and we'll be happy to talk about our work then. We've got more Kaipure blog posts planned, so keep your eyes open for updates and insights.