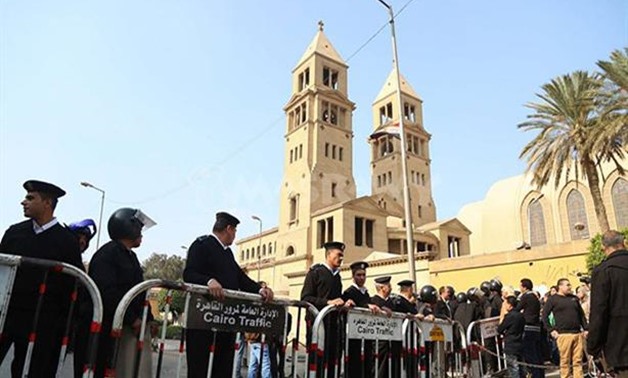 File - Security borders around a church in Egypt

The ministry is preparing security services to be uninterrupted and available for people in cases of emergency, according to a high profile source in the ministry under condition anonymity.

All security service departments have made the necessary arrangements to make Christmas celebrations safe and joyous for all Egyptians, the source stated.

The ministry confirmed the importance of intensifying the presence of security forces around public areas and places of worship to be able to deal immediately and decisively with any attempt to disturb the holiday celebrations of Egypt's citizens.

According to the security plans, security forces will apply 800-meter "safe areas" around churches and provide explosive detection devices to counter any attempts to target places of worship, the source added.

Security forces will implement security procedures for all 2,326 churches in Egypt, including all 1,326 Orthodox churches, 1,100 protestant churches and 200 catholic churches.

File - Securiy forces infront of a churche in Egypt

Moreover, the ministry will provide a number of vehicles to be used by security patrols. The vehicles will include a detention room able to accommodate six suspects at a time.

The vehicles are equipped with state of the art technology, communication equipment and connectivity, supported by CCTV, ANPR and SCOUT-APP camera systems, to monitor and document the security situation on roads and main axes and to identify license plate numbers.

Police patrols will target rented flats around places of worship in different governorates, which terrorists sometimes use as headquarter for planning attacks and preparing explosives. Forces will also target extremists in remote areas, based on acquired intelligence information.

The Abbasiya Patriarchate, where the Patriarch of the Coptic Orthodox Church, headed by Pope Tawadros II, prepares for Christmas on January 6, 2018; coinciding with the finalization of restoration work for the Grand Church in the cathedral where Christmas Mass will be held on the holy night.