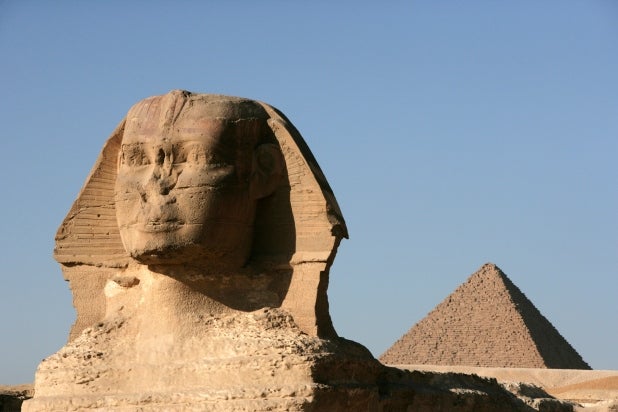 CAIRO, EGYPT - FEBRUARY 9. The Sphinx is seen in front of the Pyramid of Chephren on February 9, 2006 in Giza, Cairo, Egypt. The Sphinx is carved almost entirely from one huge piece of limestone leftover from the carving of the stones for Cheops pyramid and is about 50 meters long and 22 high. Cairo is still the heart of Egypt and is allegorically called "the Mother of World" Greater Cairo's population is estimated at between 18 and 22 million, roughly a quarter of Egypt's total. Some 62 slums and squatter settlements alone are home to about five million people. And there are countless numbers of people living in the ancient cemeteries known as the City of the Dead. The massive and continual increase in the number of people has overwhelmed the city. Housing shortages are rife, buses are packed to the hilt, snarled traffic paralyses life in the city and broken pipes spew water and sewage into the streets. Everything i s discolored , buildings, buses and footpaths are brown and grew from smog and desert dust. (Photo by Marco Di Lauro/Getty Images)

Discovery's Science Channel will re-create what Queen Cleopatra may have looked like through the use of modern technology and explore other legends of Ancient Egypt in "Egypt's Unexplained Files," its new 10-part series.

The two-hour season premiere will see experts focus on recreating Queen Cleopatra while also investigating whether or not Pharaoh Akhenaten's 17-year reign actually produced the Utopia for which he is credited.

Additional topics to be addressed in the show's first season include Ancient Egyptians' fascination with death and the embalming of mummies; the lost tomb of Imhotep; the Curse of King Tutankhamun; the lost city of Tanis; the Great Sphinx; the science behind the ancient culture's advanced medical and engineering practices; and the truth behind Egypt's first female pharaoh.

"From King Tut to the Pyramids at Giza, this series shines a spotlight on some of the new insights that the latest tools of archaeology have, in the last several years, helped transform our basic understanding of Ancient Egypt," executive producer Neil Laird told TheWrap.

The season premiere of "Egypt's Unexplained Files" airs Sunday, April 14 at 8/7c on Science Chann
Posted by Glenn Meyer at 8:01 AM