March 15th, known as the Ides of March on the Roman calendar, marks the notorious day when Julius Caesar was stabbed to death in Rome in 44 BC. This week, the Nile Scribes highlight Egypt under Roman rule, a period often glossed over in surveys of ancient Egypt, which began when Marc Antony and Cleopatra were defeated at the Battle of Actium in 31 BC. We've selected five books that take the reader through many of the developments of this period: from its realistic mummy portraits and their related mortuary practices to the enduring influence of Egyptian culture on Roman art and architecture. 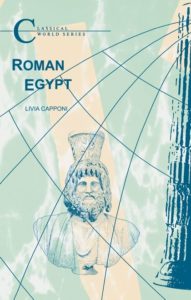 Nile Scribes: An introductory survey of Roman Egypt in less than a hundred pages, Capponi's book traces Rome's involvement in Egypt from the process of turning Egypt into a Roman province through the Byzantine Empire's final loss of Egypt in 646 AD. Her book also describes Roman Egypt's importance as a tax-paying and agricultural component of the Roman Empire. Capponi also devotes two chapters to the best understood, and most important, Roman sites in Egypt: Alexandria and Oxyrhynchus, where a majority of our knowledge of social life during Roman Egypt is derived. Read Roman Egypt for a short survey of Rome's history and policies in Egypt and an introduction to the challenges that historians face while constructing a narrative of social and cultural life in Egypt under Roman rule.

City of the Sharp-Nosed Fish: The Lives of the Greeks in Roman Egypt 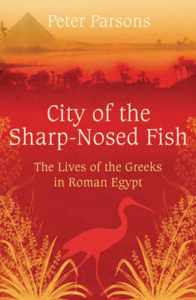 NS: The discovery of the Oxyrhynchus Papyri, a collection of 500,000 fragments of Roman-era papyri, happened over a decade of excavations beginning in 1897 at a site in Middle Egypt on the banks of the Bahr Yussef. Discarded in a rubbish dump were thousands of letters, tax receipts, wills, and notices of sales, more thoroughly elucidating the lives of the Greek population living in Roman Egypt than any other discovery before, or likely since. Parsons' book is aimed at the non-specialist, deftly weaving a narrative that incorporates the story of their discovery, the history of the collection's study, and philological attempts to translate the papyrus fragments. The result is a colourful image of life in Roman Egypt: from literacy and family to industry and bureaucracy. 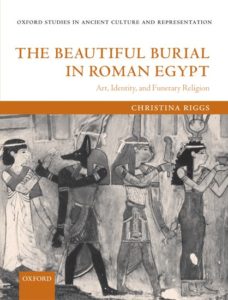 NS: Egypt in Roman times is often regarded as a hodgepodge of many different styles and this can perhaps best be demonstrated in its funerary culture. Christina Riggs, editor of The Oxford Handbook of Roman Egypt published in 2012, does not focus her work here on the well-known mummy portraits, but instead includes more poorly recorded material (e.g. mummy masks) to emphasise how Roman characteristics existed alongside more traditional Egyptian ones. Individuals from this period often paid greater attention to the decoration and ornamentation of the deceased and many adaptations from traditional Egyptian iconography were interwoven with typical Roman ideals. Identity and how it was influenced by these diverse elements lead Riggs' investigation; readers will get a good look at how cultural identity was constructed in this period.

Egypt in Italy: Visions of Egypt in Roman Imperial Culture 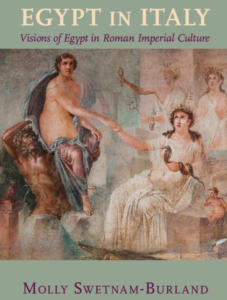 Find it on Goodreads| Amazon

NS: When Octavian added Egypt to the Roman Empire in 30 BC following his defeat of Cleopatra and Marc Antony a year earlier, Egyptian culture would continue its spread towards the western Mediterranean. Egyptian religion remained popular and its landscape and architecture (e.g. the Nilotic landscape at Praeneste) inspired Roman minds across the empire. In this work, Molly Swetnam-Burland focusses on many imports of Egyptian objects that made their way to Rome and the topic of reusecomes up often in her work: she argues that many original Egyptian objects attained new purposes in the Roman world. Egypt in Italy offers a detailed look into how ideas and concepts from ancient Egypt made their way into the Roman psyche and how these objects took on a new life in their new environs. Swetnam-Burland traces Egypt's popularity throughout Imperial Rome, but also offers exciting case studies such as the adoption of the cult of Isis at Pompei. She shows well how Egyptian culture was to remain popular for centuries despite being incorporated into the Roman empire. 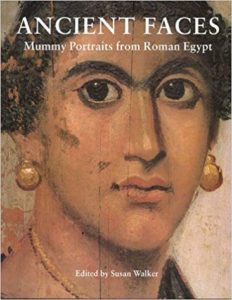 NS: An alluring feature of Roman funerary culture in Egypt was the 'mummy portrait'. A lifelike rendering of the deceased painted on wood panels in encaustic and tempera, mummy portraits developed out of the long history of funerary masks worn by the deceased in Egyptian funerary tradition. These realistic mummy portraits, now numbering nearly a thousand in collections around the world, illustrate the multiculturalism of Roman Egypt through the artists' blending of Egyptian and Roman styles and practices in depicting the deceased for their afterlife. Ancient Faces accompanied an exhibition by the same name at the Metropolitan Museum of Art in 2000 that showcased over 70 mummy portraits. Walker et al. enable you to see Roman Egypt through the eyes of the individuals who lived there two thousand years ago and meet some of them face-to-face as well.