In the middle of the Egyptian desert on a vast plain east of Cairo, a pharaonic city looms large on the horizon. But the buildings shimmering in the distance are not the ruins of an ancient civilisation. They are the first phase of a colossal new capital – formally known as the New Administrative Capital – emerging from the sands near the existing city. 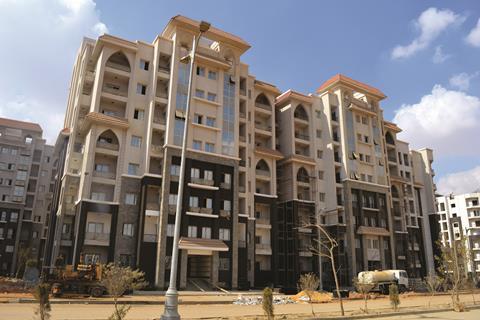 Three out of eight residential districts have already been completed

Once completed, the new capital will span an area larger than Madrid or Birmingham and will comprise a central park twice as long as New York's and three times bigger than Hyde Park. It will boast the tallest tower in Africa, the largest church in the Middle East and the biggest opera house outside Europe, and will be home to six million people.

It is, in short, one of the most ambitious urban projects in history. As the first UK publication to be given full access to the site, Property Week met the people behind the colossal scheme to find out about the challenges they face and their aspirations for the new city.

The New Administrative Capital is the brainchild of general Abdel Fattah El Sisi, who became president of Egypt following a military coup in 2014.

"We started looking for potential locations in late 2014," says Khaled Abbas, deputy minister of housing, utilities and urban communities. "We chose a very prime location. It's 60km from the Suez Canal and 45km from Cairo."

"The challenge with a new city is to stimulate growth. Moving the ministries is very clever"

A development agency called the Administrative Capital for Urban Development (ACUD) – a joint venture between the Egyptian military (51%) and the housing ministry (49%) – was set up to oversee the project and manage the land.

Only a few months after the project's announcement, in 2015, a highway connecting the site was built. Work started on site in 2016 and has since proceeded at breakneck speed. Phase zero of the project involved the construction of a new government quarter that will house the Egyptian government's 34 ministries, which are expected to relocate there over the next 18 months. They will be followed by the presidential palace, supreme court, central bank and stock exchange.

"The ministerial district is the economic catalyst of the whole project," says Daniel Horner, director of planning and urban design at Dar Group in London, which is overseeing delivery of the project.

"The challenge of any new city is to stimulate growth; to get people to live there," says Horner. "Moving the ministries is a very clever idea. It acts as a kickstarter."

Due to its proximity to Cairo and New Cairo – a new town built 20km to the east in the early 2000s – Abbas hopes that Egyptians will see the new capital as "a natural continuation" of the old city. "Cairo will remain the capital of Egypt," he says. 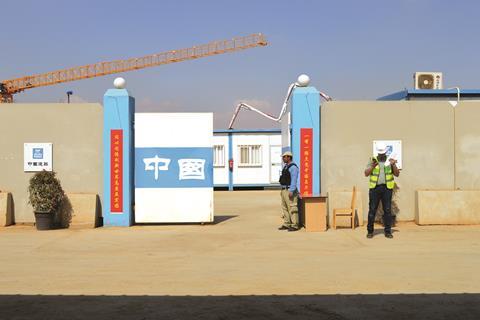 Chinese walls: signage reflects the involvement of CSCEC in the development

The site is less than an hour's drive from central Cairo. As you approach it for the first time, it is hard to imagine that only three years ago there was nothing here – just a flat, arid plain of red gravel and yellow sand. Now, the whole area is populated by white housing blocks that are almost ready for occupancy.

Some 11,000 units have been built across three residential districts for the first batch of around 50,000 government employees who are expected to move to the new capital once the ministerial district is up and running.

The housing ministry says that the units will be sold "at actual cost, with no overhead or profit", on a 20-year mortgage.

Apart from the roughly 100,000 affordable housing units, which will be distributed across eight districts on the north and south of the new capital, the rest of the residential plots have been sold to private developers. The government hopes the sale of these plots will cover the majority of the project's costs.

"There has been a great investment for the infrastructure of the project: the roads, water system, electric grid and so on," says Abbas. "This was necessary to convince private developers to come and build on the site." 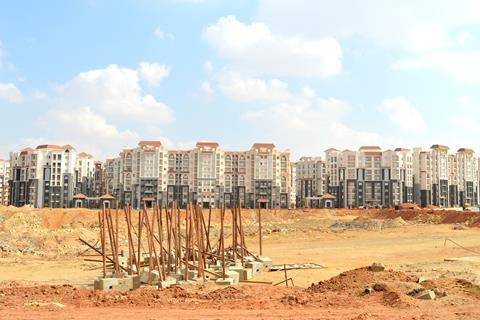 Home win: three out of eight residential districts have already been completed

To date, Abbas is satisfied with the results. "Phase one [of the residential district] is almost completed," he says. "We have sold around 85% of the plots to around 30 different developers, both Egyptian and international."

The most ambitious aspect of the development is its commercial district, christened Capital Park. 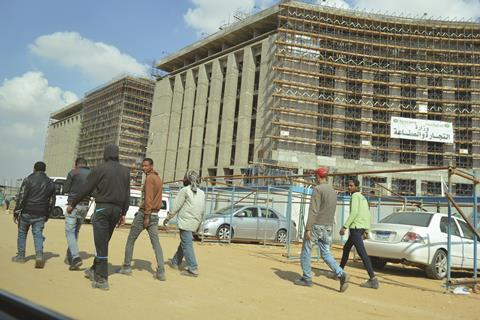 Egyptian workers outside the new buildings for government use

Capital Park spans 23 square kilometres and when fully built out, it will offer an eye-watering 183m sq ft of commercial space. The area has been broken down into three districts: Gateway, Downtown and the Central Business District (CBD).

The 10km-long Central Park will represent the "commercial artery" of the new capital, according to Dar, and once completed is expected to create more than 450,000 jobs and be home to around 180,000 people.

To access the site, you have to pass through a blue gate adorned with signs in Chinese and English. The CBD is being built by the China State Construction Engineering Corporation (CSCEC), which obtained the contract in October 2017, after the Egyptian and Chinese governments struck a $3bn (£2.3bn) deal. China has also provided a 10-year loan, after which Egypt will start to repay the costs of the project.

A red and yellow sign says: 'Welcome to iconic tower'. The breaking-ground ceremony for the 325m-tall skyscraper, which like many elements of the new capital has yet to be named, was held late last month. When completed, the tower will be the tallest in Africa and will be surrounded by another 20 skyscrapers built by CSCEC.

"Bigger isn't always better," says Horner. "There's passion in this part of the world for building big, but we don't want to create another Dubai or a monumental city. The government is doing it for necessity. We spent a lot of time making scale comparisons with other cities around the world, making sure we're not committing the same mistakes as in the past."

The Egyptian government hopes the mega project will boost the nation's economy by attracting much-needed foreign investment and at the same time solve some of Cairo's long-standing problems, such as congestion and pollution.

"In 30 years, we will be a nation of around 190 million people, doubling today's population"

"Cairo is suffering with rapid urban migration and the infrastructure is struggling to keep up with it," says Horner. "So moving the government ministries, which are a huge employer, out of the city centre alleviates some of the pressure while at the same time stimulating the growth for this new district."

Abbas adds that the new capital is designed to accommodate the country's current population growth of two million people per year – the highest annual growth in the world. "In 30 years, we will be a nation of around 190 million people, almost doubling today's population," he says.

Most importantly, he argues, the new capital will deliver better housing for millions of Cairenes. In a country where only 7% of the land is inhabited, 70% of Cairo's 20-million population live in so-called 'informal settlements'. These half-finished concrete and red-brick blocks, often without windows, are mostly built on agricultural land.

"Egypt is not like European countries where many cities have grown organically over a long period," says Horner. "Here, you only have Alexandria and Cairo. They have a massive growing population and only two cities. They have to build new ones."

A project of this unprecedented scale is not without its critics. One urban planning analyst in Cairo, who prefers not to be named, says the 50,000 government employees relocating to the new capital are only a small proportion of the total. 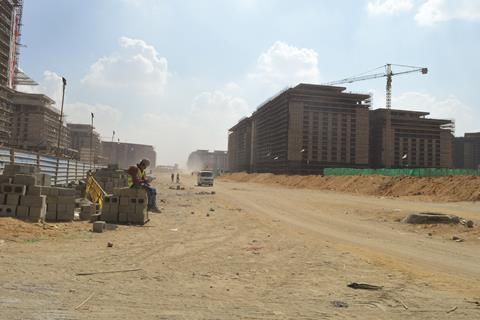 The government rejects this argument on the grounds that not all jobs "should and would" move to the new capital and that it is important for certain government functions to stay where they are. It also points out that the employment figures cited by the analyst include local government functions.

Another concern surrounds the sheer amount of housing stock currently being built around the country. David Sims, a Cairo-based urban planner, and author of Egypt's Desert Dreams: Development or Disaster?, says that the government "is counting on a never-ending demand for land" from private developers.

"My fear is that demand might be too thin, given the huge and growing market supply," he says.

He adds that while the housing being built at the New Administrative Capital "is much better quality than the informal settlements", he doubts that many people will be able to afford it.

"People [living in the informal settlements] or even the lower middle classes can't afford anything in the new capital."

But he concedes that "upper-level employees can probably afford these units", especially with "heavily subsidised" mortgages. "It's still early days and we don't know how it will work out," he says. 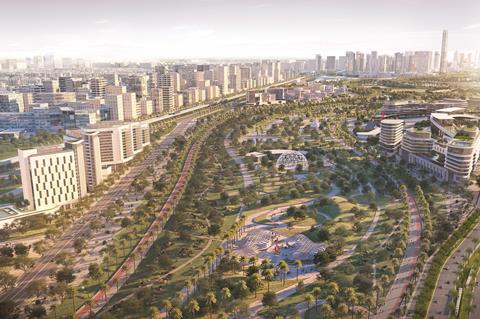 Regardless of their concerns, both the urban analyst and Sims agree that the development is proceeding at an impressive pace. "It's happening," says the urban analyst. "Whether we like it or not, they're getting things done."

Sims adds: "Will the new capital succeed? Realistically? God knows. But the government is certainly going ahead with it; they're doing a wonderful job so far."

"It's part of the natural progress of every project of this scale," says Abbas. "You have investors come and go. Now we're looking for other opportunities elsewhere."

That is one of the reasons Egypt is descending en masse to Mipim, where it will host a pavilion for the first time.

Only time will tell if the mirage of 'Sisi City', as it is informally referred to in downtown Cairo, will become the desert oasis the Egyptian people are hoping for.