While the Ministry of Antiquities keeps astonishing the world with new discoveries that indicate that the legacy of the Egyptian civilization is far from ending, it also keeps on heavily revamping the archaeological sites and restoring them in an attempt to re-attract tourism.

Since the start of the new year, the ministry announced three main renovation projects:  Philae temple in Aswan, the Graeco-Roman Museum in Alexandria, and the New Valley museum, as well as a big number of other historical sites.

The restoration is part of the ministry's latest plan in renovating abandoned archaeological sites, seeking to direct more attention toward them. 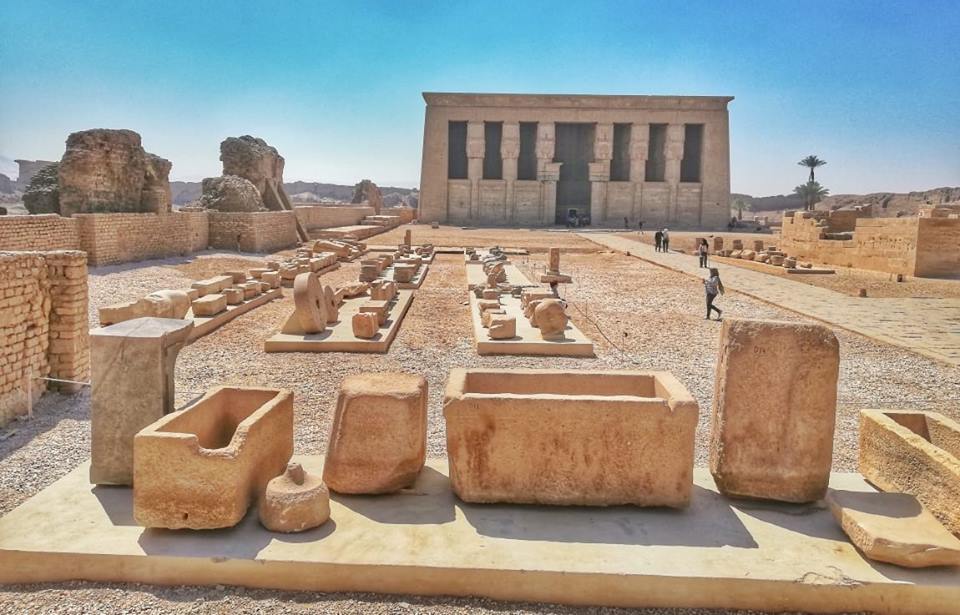 When it comes to Aswan's most captivating temple, Philae, the restoration project included providing it with several required services. The main added service for tourists was having large air-conditioned gates with the space of 4×8 metres. Six kiosks for resting are also in the process of being built for tourists to charge their phones and get a chance to have a break from touring the place.

The ministry is working on organising tourists' visits through 15 alleys and directional signs for visitors to follow and pass by every place in the area, in addition to signs written in different languages to properly introduce the temple to visitors.

Waad Allah Abu El-Ella, the head of the Projects Sector at the Ministry of Antiquities, said earlier this week in a press release that the development works also included removing of all the unpleasant grass, as well as upgrading the entrance gate and the dock overlooking the Nile. Informative signboards have been also installed in several locations in the archaeological site.

He added that repairing and upgrading the bathrooms in the site, installing modern security systems connected with a control room were also provided onsite.

For his part, Abdel Monaem Saeed, the head of Aswan Antiquities, further explained that the ministry has completed the conservation and cleaning of the temple's walls and columns and removed all bird spots.

The restoration is supported by the National Bank of Egypt within the signed protocol between both the bank and the ministry to implement services as a part of renovating archaeological sites, as well as the UNESCO. 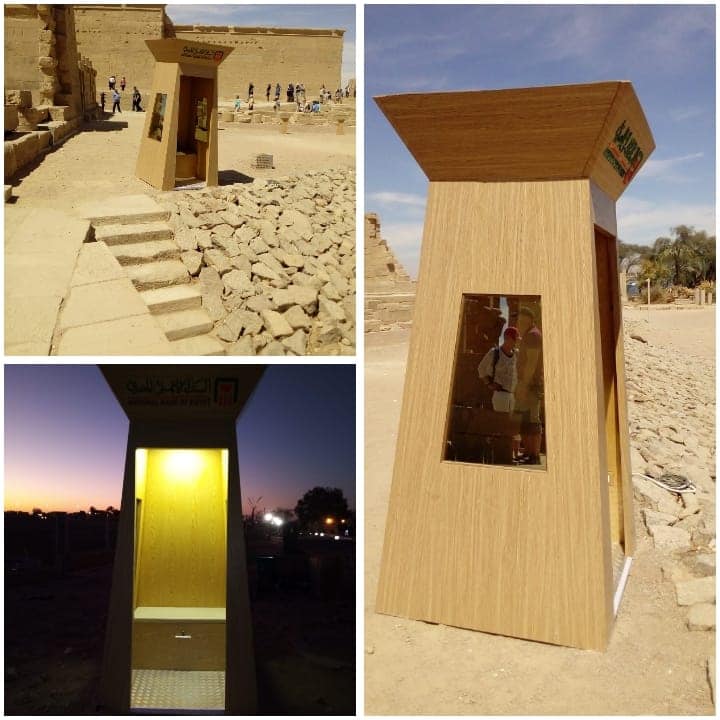 Within the same geographical frame, the ministry announced on Monday completing the restoration of the Dendera Temple complex in Qena, which resulted turning it into an open museum.

The project was established with the help of the French mission working in the area, to showcase the 145 stored relics. Mostafa Waziri, the secretary general of the Supreme Council of Antiquities, stated that the Roman-Greek monuments date back to both the Old and New Kingdom.

The museum is planned to be opened in two phases; the first was announced to be launched. The ministry stated that the second phase will include a giant pink granite tomb, with carvings of Roman inscriptions, mainly the lotus flower, and depicting king Thutmose III.

As for the New Valley museum, it has been renovated to include a permanent exhibition among its displayed items.

The new permanent exhibition includes showcasing the belongings of the Dabasheya cemetery, which was discovered a couple of decades ago.

The restoration included setting a place for the new exhibition and renovating unearthed relics. The antiquities on display belong to a person called 'Mes Wy' who was one of the nobles in the Greek-Roman era. The cemetery was unearthed in 1994. Seventeen of the burial belongings were restored and are currently showcased at the museum. Among the displayed monuments are statues for Osiris, and a mummy of the tomb's owner.

The restoration included making a miniature of the burial chamber in which the relics were found.

The renovation started in 2018 and it is planned to be finalised by this year. 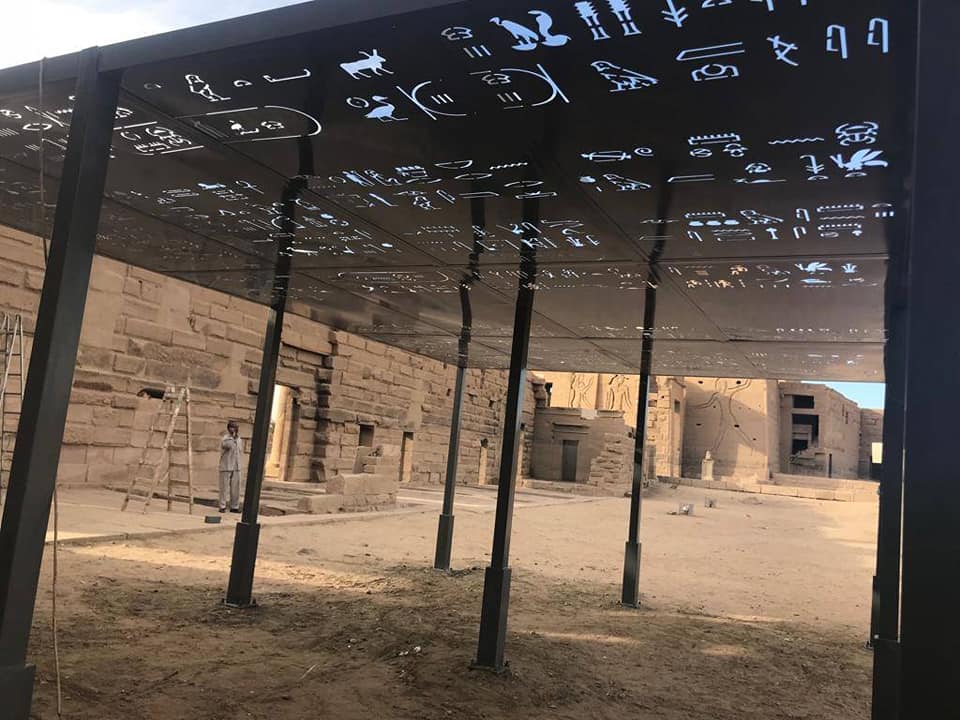 Hisham Samir, the minister of antiquities' adviser for projects, told the state-run media outlet, Al-Ahram Online, that the restoration is almost half way through.

"So far, 48% of the work has been completed. This includes the restoration of the western and eastern façades, the inner walls and 90% of the building's metal frame, as well as the consolidation of the museum's ground floor, the exhibition halls and the administrative building," Samir said, according to Al-Ahram online.

The museum is planned to have 30 galleries in order to showcase the currently restored relics, which are more than 20,000 artefacts.

While the ministry follows-up with improving the archaeological sites, it constantly announces the success of its restoration plans.

The ministry also announced earlier last week, the complete restoration of Kom El-Shoqafa archaeological site in Alexandria, which included lowering underground water that was threatening the relics in the tombs.

The restoration was conducted with the help of the United States Agency for International Development (USAID) and the National Authority for Potable Water and Sewerage. The USAID granted the renovation a total of $5.7m in order to facilitate the process and shorten its required time.

The site is also planned to be reopened as an open museum. It will be divided into four sections. The first will be dedicated to funeral architecture and is planned to contain 34 tombs with detailed signs revealing the description and era of each of them. While the second part of the museum will be dedicated to religious architecture where several statues are to be displayed including those of sphinx figures.

The third part will display civil architecture, specifically the remains of unearthed structures including building columns. The fourth extension will be dedicated to artefacts the committee expects to be discovered throughout the restoration process.