The contents of this site are continuously under construction, so please check back often.

Welcome to the Book of the Dead in 3D 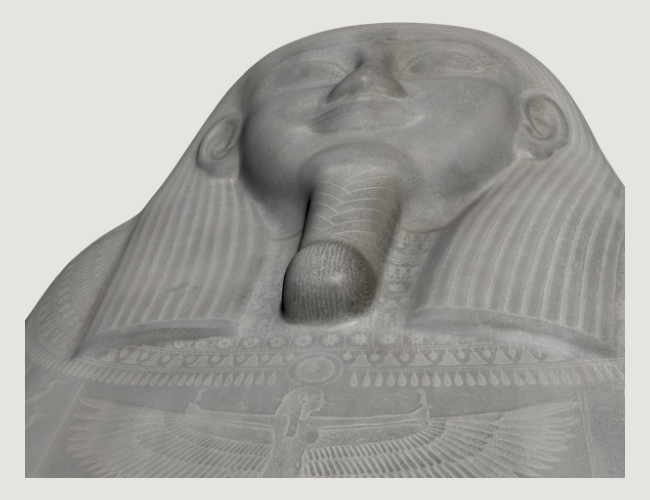 Every image and piece of text has a purpose...

Egyptian coffins are inscribed with spells and images which stand in for spells. All function together as a machine to resurrect the deceased and to guide them safely through the next world. Given this function, its perhaps surprising that the texts from coffins are usually published completely divorced from their position on the coffin. Any additional meaning conferred on the texts by their placement on the surrogate body or relative to each other and the vignettes is lost. In order to understand a coffin as a magical machine, it's necessary to view the spells in 3D so that this relationship can be taken into account.
The aim of this project is to explore the relationship between texts and their positioning on a magical object through building annotated 3D models of coffins displaying the texts and translations.

This is the outer coffin of a 22nd dynasty priest of Amun named Nespaperennub. Nespaperennub worked as a priest at... END_OF_DOCUMENT_TOKEN_TO_BE_REPLACED

This is the middle coffin of Nespaperennub, a priest at the temple of Amun at Thebes during the 22nd Dynasty.... END_OF_DOCUMENT_TOKEN_TO_BE_REPLACED

This cartonnage (a mummy-envelope made of linen, gum, and plaster) was the innermost coffin in the nesting set of a... END_OF_DOCUMENT_TOKEN_TO_BE_REPLACED