One of the most striking objects in the exhibition 'Tutankhamun: Treasures of the Golden Pharaoh', which recently opened to sell-out crowds at the Saatchi Gallery in London, is a life-sized striding statue of the king. One of a pair (its mate remains in Cairo), in many ways these statues exemplify many of our misapprehensions about Ancient Egypt in general and Tutankhamun in particular. 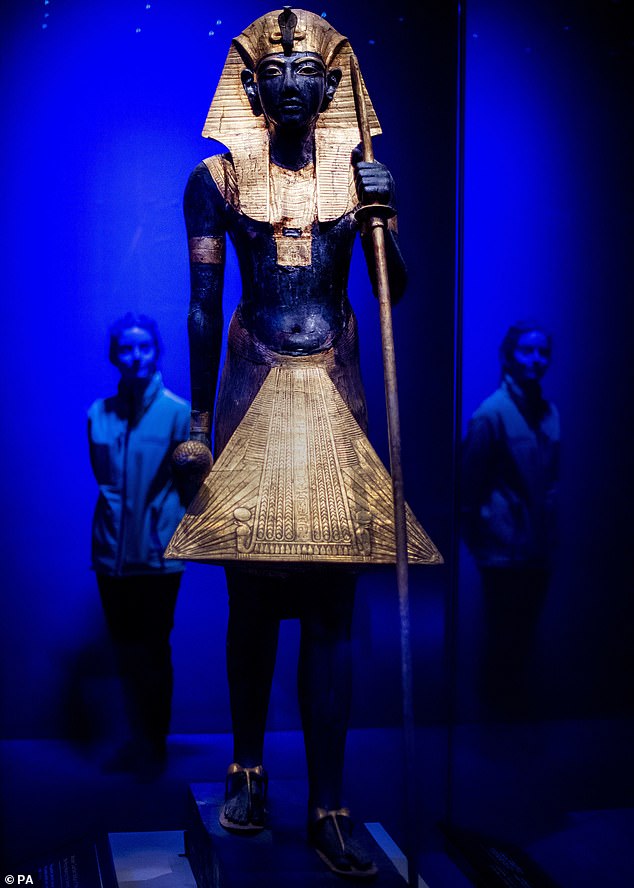 In dramatic black and gold, the statues were said to be really 'life-size' because they represented the pharaoh at the same height as discoverer Howard Carter claimed the 'boy king' had been in life after measuring his mummified body.

The Tutankhamun exhibition – of which I was lucky to get a preview – emphasises the status of the king's funerary assemblage as priceless, luxurious, consisting of one-of-a-kind treasures. In fact, it is clear from the broken remains of the contents of other tombs in the Valley of the Kings and elsewhere that such statues were part of a standard set of funerary furniture that a king of Egypt's New Kingdom could expect to be buried with. Tutankhamun's was if anything a pared down version of the set.

The closest parallels to Tutankhamen's statues come from the tomb of Ramesses I (KV 16). Giovanni Belzoni describes their discovery in the burial chamber in 1817:

…in a corner a statue standing erect, six feet six inches high, and beautifully cut out of sycamore-wood: it is nearly perfect except the nose… in the chamber on our right hand we found another statue like the first, but not perfect. No doubt they had once been placed one on each side of the sarcophagus, holding a lamp or some offering in their hands, one hand being stretched out in the proper posture for this, and the other hanging down.

Two similar, though less well-preserved, statues come from the tomb of Horemheb (KV 57). Like those of Ramesses I, these are somewhat over-lifesize in scale. One other statue of this type originates from the tomb of Ramesses IX now in the British Museum, and is roughly lifesize. All of these are resin-coated, and seem to have originally been gilded. The presence of this statue type throughout the Eighteenth Dynasty is indicated by fragments: in KV 20, the tomb of Hatshepsut/Thutmose I, the excavators noted "a part of the face and foot of a large wooden statue covered with bitumen"; Amenhotep II was provided with a resin-coated example in the same pose as later statues but at only 80 cm in height and fragments of sculpture on the same scale come from the tombs of Thutmose III and IV. Parts including "two left ears and two right feet" for "lifesize wooden statues" were found in the cache tomb WV 25 but perhaps washed in from the neighbouring tomb of Ay (WV 23). Taken together, this evidence suggests that such royal images increased in scale over time. Depictions of statues exactly similar to Tutankhamun's appear in a scene of sculpture being produced in the tomb of the vizier Rekhmire (temp. Tuthmose III/Amenhotep II) – suggesting a consistent iconography over time.

Scene from the tomb of Rekhmire (TT 100)

In Tutankhamun's pair, one wears the nemes headdress and the other a khat bag-wig. The same head coverings also occur on the pair of statues of Ramesses I, although other statues are insufficiently preserved to know if this pattern was standard. The khat-wearing statue of Tutankhamun has a text on the kilt apron labelling it as: "The Perfect God… royal Ka-spirit of (the) Horakhty, (the) Osiris… Nebkheperura, justified". This favours the interpretation of the statue(s) as a home for the royal Ka-spirit.

The supposed function of these sculptures as "guardians" arises from the position at the doorway of the burial chamber of Tutankhamun's (albeit truncated) tomb, the seemingly threatening maces they hold and especially the over-lifesize scale of the Horemheb and Ramesses I examples.

Carter initially coined the term "guardian statue" and the contemporary press accounts emphasised this apparently defensive function in descriptions; that is still how the statue is described in the Saatchi exhibition interpretation. However, in no simple way is the statue a 'guardian.' The root of this persistent misinterpretation – absolutely typical for Egyptology – may lie in a deep-seated anxiety that the tomb was not supposed to be entered – the same apprehension that has fuelled countless examples of mummy fiction.

One wonders if the statues actually represent a much more general freedom of movement and power for the deceased; spells from the Book of the Dead are illustrated by vignettes of the deceased holding a cane and sceptre and the same iconography notably occurs frequently on falsedoors from the Old Kingdom onwards. These images are not usually interpreted as 'guardians' of the tomb – although the precisely parallel in two-dimensions the 'scene' set up in front of the door to Tutankhamun's burial chamber in three-dimensions.

As ever, Tutankhamun's 'treasures' say more about our modern anxieties about looking inside the tomb than they do about the ancient functions of objects such as sculptures.