Digital files of the bust were guarded almost as closely as the artifact itself. 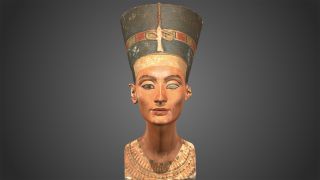 The full-color model is made up of more than 6 million triangular polygons — 2D shapes that are the building blocks of a 3D digital object.
(Image: © Cosmo Wenman, CC BY-NC-SA 3.0)

When a German museum scanned a remarkable ancient Egyptian sculpture of the queen Nefertiti the digital files were guarded almost as closely as the iconic artifact itself.

However, the Egyptian Museum and Papyrus Collection in Berlin has finally released the 3D scan of the 3,000-year-old statue, after a 3-year campaign by digital multimedia artist Cosmo Wenman. Wenman then placed the files on Thingiverse, a site for viewing and printing 3D objects, Wenman wrote in a blog post.

The bust shows the striking face of Nefertiti; she lived from 1370 to 1336 B.C. and was the wife of  Pharaoh Akhenaten. Carved in limestone by the court sculptor Thutmos in 1340 B.C., the bust shows the queen as "a grown woman with a harmonic and balanced beauty," according to a description on the museum's website.

Archaeologists unearthed the artifact in Amarna, Egypt, in 1912, and it has been in the collection of Berlin's Egyptian Museum since 1920. Museums often scan and 3D-model important objects to make them more accessible; unlike fragile artifacts, high-res models can safely and easily be manipulated in three dimensions, revealing their smallest details. The museum had done just such a 3D scan of the Nefertiti bust, Wenman discovered in 2016 — but getting permission to see it would prove to be complicated and time-consuming.

Beginning that year, Wenman doggedly pursued access to the Nefertiti files under Germany's freedom of information laws, which enable anyone to attain copies of official records (including digital media) that are created by federal agencies.

But the Prussian Cultural Heritage Foundation — the organization that oversees state museums in Berlin — initially denied Wenman's request. Representatives claimed that releasing the scan would interfere with the museum's sales of Nefertiti bust replicas in its gift shop, Wenman said. Eventually, the agency granted his request, sending him a USB drive with the files.

What's more, the museum had virtually "stamped" the underside of the 3D model with a Creative Commons license, effectively making it free for anyone to copy, adapt or transform for noncommercial use, as long as the original source is acknowledged, Wenmain said in the blog post.

While Nefertiti's 3D scan has escaped from its digital limbo, other fine art masterpieces are not so lucky. Wenman is currently seeking access to 3D scans of Auguste Rodin's "The Thinker," which officials with the Rodin Museum in Paris are refusing to release, Wenman said in a statement.

On Thingiverse, the files are available for anyone to download and use for noncommercial purposes, under the Creative Commons license assigned to the scan by the museum, Wenman wrote.