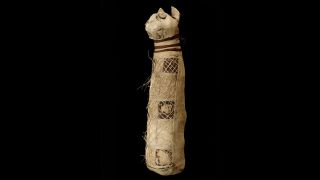 Scans of an ancient cat mummy revealed that the 2,500-year-old feline supposedly resting within the wrappings wasn't a single animal. Instead, the mummy held the partial remains of three cats, according to new findings.

Ancient Egyptian cat mummies aren't uncommon, and archaeologists have previously found tens of cat mummies in burials. In ancient Egypt, pets were commonly buried with their owners. The desire to preserve animals as offerings to the gods led to the establishment of an entire industry and the mummification of over 70 million animals, according to a previous Live Science report.

A group of researchers recently analyzed the 2,500-year-old Egyptian cat mummy that was part of a collection at the Museum of Fine Arts in Rennes, France. The scientists performed a computerized tomography (CT) scan, a type of X-ray, to illuminate what was inside the mummy without unwrapping it, and then they created 3D digital and transparent 3D-printed reconstructions of the mummy.

The scans revealed that this ancient mummy was filled with some surprises. Instead of the cat's head, the mummy held a ball of fabric. It was also missing a skull, vertebrae and ribs, and instead held five hind leg bones from three different cats, according to a statement from the National Institute of Preventive Archeological Research (Inrap) in France. The bones were decomposed and riddled with holes created by corpse-eating insects, said Théophane Nicolas, a researcher at Inrap who was part of the project.

"Cat mummies have been found in very large quantities sometimes in extremely degraded states and reduced to the state of accumulation of bones," Nicolas told Live Science. But sometimes what you see on the outside is not what you get on the inside, he said. While some animal mummies are complete, others are empty or have only fragments of animal bones.

What's more, because the larger mummies preserved as offerings for the gods sold for more money, many of the mummies were made to appear bigger than the animals themselves, and some didn't contain animal remains at all. Instead, they were filled with organic material such as leather and gravel, according to the previous Live Science report.

It's unclear why the Rennes cat mummy held the partial remains of three different cats, but some researchers believe that it was part of an "ancient scam organized by unscrupulous priests," Nicolas said in the statement. Priests could have "resorted to less elaborate preparations, impossible to detect by sight" for rituals which "gradually lead to mummies whose cat shape represents a visible reality beyond the real content," he told Live Science.

But Nicolas and his team don't think that's necessarily true. "We believe on the contrary that there are innumerable ways to make animal mummies," he said in the statement.

The group of scientists projected the internal 3D reconstruction onto the 3D-printed model of the mummy. This glowing object was presented last month in Sweden at the European Heritage Days 2019 event and will be on display for people to view at the Museum of Fine Arts in France.