Egypt's Antiquities Ministry on Monday opened the Idu and Qar tombs in the Eastern Cemetery at Giza following the completion of restoration work, allowing visitors to tour the tombs.

These openings comes as part of the ministry's policy to open up archaeological tombs in the region for visitation, opening some once restorations are done while closing others during renovation work. 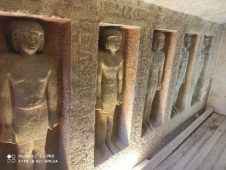 The Director of the Pyramids Archaeological Area, Ashraf Mohie-Eldin, said that restoration at the Qar tomb included mechanical cleaning, strengthening the roof at the entrance, and restoring the walls of the main hall.

The tomb of Qar is located east of the Great Pyramid of the Eastern Cemetery at Giza.

In a statement on Monday, Mohie-Eddin said that the Idu tomb was also subjected to mechanical cleaning, and some parts of the roof were reinforced. The weak and worn-out parts of the mud bricks were also reinforced at the outside hall of the tomb, he added.

This tomb is located to the east of the Great Pyramid in the Eastern Cemetery at Giza, carved into rock and dating back to the era of the Sixth Dynasty of the Old Kingdom, also during the reign of Pepi I Meryre.

Idu was the son of Qar. His titles included the scribe of the royal documents in the presence of the King, tenant of the pyramid of Pepi I Meryre, and inspector of the wab-priests of Khufu and Khafra pyramids.