When it comes to the Kelsey Museum of Archaeology’s collections, not all artifacts are created equal. Some call out to us intellectually, others emotionally. 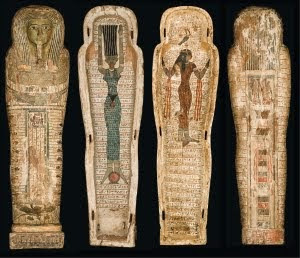 Front, inside, and back views of the Djehutymose coffin.

Why: “This coffin is both elegant and beautiful and offers human solutions to natural events such as the sun rising each day after the darkness of night. For example, see the goddess Nut painted on the interior of the coffin lid with a red sun disk on her mouth, which she swallows every night and to which she gives birth (the red disk at her feet) every morning.”

About Artifact: It dates to the Saite Period, an era of great artistic revival in ancient Egypt. Texts on the coffin identify its owner as a man named Djehutymose, a priest of the falcon god Horus and the “Golden Goddess” Hathor, and give the names of his parents, Nespakhered (also a priest) and Taro (“The Lady of the House.”)

The coffin, carved to represent the mummy of Djehutymose, is covered with magical spells from the ancient Egyptian Book of the Dead and images of protective gods and goddesses. In this way, the identification of Djehutymose with Osiris is reinforced, and he is provided with multiple levels of protection against the perils of the afterlife as well as appropriate spells for the successful continuation of life in the world of the dead. The coffin represents a microcosm of the afterworld and the eternity that Djehutymose expects to enjoy.

Lid Exterior: Djehutymose’s face is green in imitation of the god of the dead, Osiris; the color symbolizes regeneration and rebirth. His false beard is characteristic of Osiris; his collar with falcon-headed terminals is another symbol of rebirth. His name reinforces his personal identity throughout the texts on the coffin. The goddess Isis, wife of Osiris, spreads her wings protectively over Djehutymose’s feet. A snake encircles the entire coffin lid, its tail and head meeting above Djehutymose’s feet. This circled snake symbolizes protection and eternity.

Lid Interior: The sky goddess Nut spreads her wings protectively over Djehutymose’s chest. Nut’s crown is a sun disk containing her name, and she holds powerful ankh (life) symbols in her outstretched hands. The two eyes of Horus (wedjat) symbolizing protection and rejuvenation are confronted on either side of her head.

Base Exterior: Protective texts from the Book of the Dead and processions of gods and goddesses line the sides of the coffin.

Base Interior: The goddess Imentet magically embraced Djehutymose’s mummy as it lay in the coffin.

Background: For much of Egyptian history, the bodies of the dead were placed in coffins, which often bore texts giving the names, titles, and parentage of the deceased, as well as religious texts for provisioning, protection, and regeneration in the afterlife. 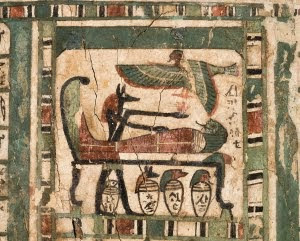 Djehutymose lies on a funerary bed, where he is being embalmed by the jackal-headed god Anubis. His soul (ba) in the form of a human-headed bird, hovers overhead. Beneath the bed are four canopic jars containing Djehutymose’s internal organs, removed during the mummification process.

“Fashioned nearly 2,600 years ago, the Djehutymose Coffin has made a complicated journey into the present. In the intervening centuries, the coffin was separated from Djehutymose’s mummy, now lost. Within the last hundred years, Djehutymose’s coffin traveled far beyond the imaginings of the ancient Egyptians: from Egypt to Ann Arbor, Michigan. Donated to the University of Michigan in 1906, the coffin was long on display at the Kalamazoo Public Museum before it returned to Ann Arbor in 1989,” according to the Kelsey publication, Life, Death, and Afterlife in Ancient Egypt: The Djehutymose Coffin.

Although the mummy of Djehutymose is long lost, the coffin has a large modern-day following on Facebook’s Mummy Djehutymose, with 3,892 followers to date, and on Twitter’s @Djehutymose with 3,650 followers). Through Twitter, Djehutymose converses regularly with three ancient Egyptian mummies:

Learn More: Life, Death, and Afterlife in Ancient Egypt: The Djehutymose Coffin, by T. G. Wilfong, available in our Gift Shop or online at https://www.isdistribution.com/BookDetail.aspx?ad=34777.

Find out more about Richard Redding’s work in Giza, Egypt, at http://www.aeraweb.org.