Arab tourists' admission to archaeological sites to rise by 100-300% 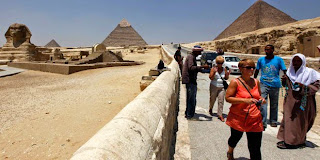 Tourists during their visit to the pyramids - YOUM7
By Rany Mostafa

CAIRO: The decision of the Antiquities Ministry to raise entrance fees paid by Arab tourists and locals to visit Egypt's archaeological sites has drawn mixed reviews.

"The timing of the decision is not appropriate as the country witnesses its record-low level in decades. The decision contradicts the promotion campaigns launched by the Tourism Ministry to revive the tourism sector," a chairman of a leading travel agency told The Cairo Post Wednesday on condition of anonymity.

He explained that the hike in entrance fees will lead to a hike in the travel packages offered by travel agencies.

In March, the ministry said in a statement it will raise archaeological sites' admission only for Arab tourists and local Egyptians adding that the hike, which ranges from 100 to 500 percent, will be in effect starting from June 1.

In August 2014, Antiquities Minister Mamdouh al-Damaty said "the ministry has been encountering financial problems with its total debt reaching 2.8 billion EGP due to the sharp decrease in its revenues (mainly from entrance fees) in the wake of the January 25 Revolution."

Despite ongoing campaigns to assure foreigners that the country is a safe destination, the tourism sector has been in constant decline since the overthrow of former President Hosni Mubarak in February 2011.

"The current yearly income is only enough to pay the salaries of the ministry's employees for just two months." He added.

According to the new price structure published in Youm7, admission to the Egyptian Museum will be for 10 EGP up from 4 EGP per person, 30 EGP for Luxor Museum up from 10 EGP, 10 EGP for Giza Pyramids up from 2 EGP.

Sites in Aswan including the Temple of Philae and the High Dam will see a 500 percent hike from 8 EGP to 40 EGP per person.

Director General of the Supreme Council of Antiquities Mostafa Amin defended the hike saying that the entrance fees have not increased since 2006 and that the value of the Egyptian Pound has increased in these nine years.

"The money generated through the difference in prices of admission fees will be directed to complete the ministry's suspended development projects, renovation work and other services needed to maintain the sites," Amin told The Cairo Post.

Egypt depends on tourism for around 20 percent of its hard currency. The sector's total investments are valued at 68 billion EGP (U.S. $9.8 billion,) according to the Ministry of Tourism.