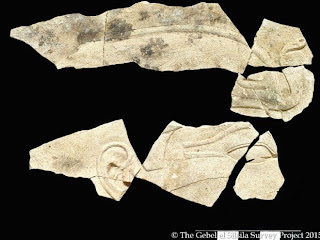 CAIRO: Remains of a lost 3,300-year-old temple, most likely founded by the 18th Dynasty Pharaoh Thutmose II, have been unearthed in the Gebel al Silisilah; ancient Egypt’s largest sandstone quarry located to the north of Aswan.

The temple, previously described as a “destroyed Ramesside temple,” was discovered during excavation work being carried out by a team from Sweden’s Lund University and headed by Dr. Maria Nilsson and Dr. John Ward.

“We were successful in locating the temple based on the rudimentary map published by Borchardt and a basic unpublished plan drawing by Lacovara,” Nilsson told The Cairo Post Sunday.

The remains of the temple have revealed archaeological evidence for at least four chronological periods; Thutmosis/Hatshepsut, Amenhotep III, Ramses II and the Roman period, according to Nilsson.

Gebel Silsila is a rocky gorge between Kom Ombo and Edfu villages where the Nile narrows and high sandstone cliffs come down to the edge of the river. Several shrines were cut in the area by the New Kingdom Pharaohs Thutmose I, Hatshepsut, Thutmose III and Horemheb, archaeologist Sherif el-Sabban told The Cairo Post.

“The significance of the find is that it changes the history of the site, and it firmly establishes Gebel el Silsila as not only a quarry, but also a sacred location. The archaeologist are currently studying the material, and working on producing a comprehensive plan and eventually 3D (digital) reconstruction,” Ward told The Cairo Post Sunday.

Among the small finds discovered in the temple area were several 18th Dynasty beads, colored plaster, faience sherds, thousands of pot sherds, and a blue-colored scarab, according to Ward.

She added that the oldest building phase of the temple was made up by limestone, which is unique within a sandstone quarry, and “may signify the official changeover from limestone construction to sandstone.”

Earlier this year, the mission unearthed a rock inscription portraying a rare transfer of two obelisks from a quarry at Gebel el Silsila.=