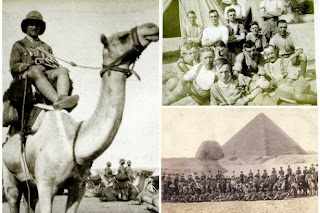 The haunting stories of life in the muddy trenches during World War One are perhaps some of the most memorable stories in history of what the war was like but Cardiff University is asking people to share their pictures of the ‘forgotten front’ and have some fascinating pictures. Jessica Flynn reports...

New memories of Welsh soldiers in Egypt and Palestine during World War One have been unearthed as part of a Cardiff University project aiming to bring to life the “often-overlooked” Middle Eastern front during the conflict.

Most people associate World War One with the mud and trenches of the Western Front but the war was a global conflict and in the Middle East there were cavalry actions and fast-moving fronts.

Many Welsh soldiers who served on the Western Front also served for a time in the sweltering heat of Egypt and Palestine but their experiences are less well known.

Egypt and Palestine are often overshadowed by the Western Front

Professor Paul Nicholson, from Cardiff University’s School of History, Archaeology and Religion, said: “Egypt and Palestine in the First World War are often overshadowed by the Western Front but they are important areas.

“Egypt was a transit point for troops en route for the Dardanelles, an intelligence base for campaigns against the Ottoman Empire, and in particular the base from which the Palestine Campaign was launched.

“Up until now access to images relating to this theatre of conflict have been limited and information on how the region was seen by those who visited it, and who lived there, has often seemed inaccessible.

“This project seeks to make them better-known through the collection of a series of images from the time, many of which are in scrapbooks handed down from those who took part in the conflict.”

View of an Antique Land

Funded by the Heritage Lottery Fund the university-led project, called View of an Antique Land – Imaging Egypt and Palestine in the First World War, aims to reveal the not so well-known Middle Eastern front in a way not seen before.

It seeks to make available, via a website, images of the military camps, soldiers and archaeological sites which the soldiers may have visited, and the towns through which they passed, to provide a snapshot of Egypt and Palestine at the time.

As part of the project a roadshow was hosted by Firing Line at Cardiff Castle at the weekend which saw several donors submit their significant collections of postcards, photographs, and greeting cards relating to World War One in Egypt and Palestine.

“We have become very attached to the story of a Private from the Heath, Cardiff, who was posted in Egypt and whose granddaughter kindly supplied us with images of his time there,” said Hilary Rees, from Cardiff University’s School of History, Archaeology and Religion.

“The collection of photographs and postcards document his service there between 1916 and 1919 – during which time he visited sites including those at Alexandria, Cairo and subsequently the Wailing Wall in Jerusalem.

“Another significant collection came from a soldier who served with the Imperial Camel Corps and who had photographs taken along most of the length of the Nile from Alexandria to Aswan.”

Data will form part of an online archive of images

During the roadshow volunteers helped the project team to digitise the postcards and photographs and record the stories associated with them.

The data gathered during the event will form part of an online archive of images of Egypt and Palestine, becoming a permanent online learning resource offering new views of archaeological sites, military installations and cities as they appeared during the war.

Further roadshows are planned in Wales and England later this year on July 11 and 12 at the Regimental Museum of the Royal Welsh at Brecon and at the Tank Museum, Bovington, Dorset, on October 24 and 25.

In the meantime members of the public can also submit copies of their photographs via the website at sites.cardiff.ac.uk/ww1imagesegypt/ on Twitter at twitter.com/ww1imagesegypt or through Facebook at www.facebook.com/WW1imagesegypt