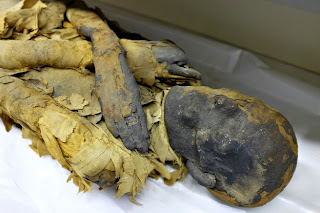 A mysterious Egyptian mummy who helped reveal the secrets of Tutankhamun will take pride of place in the University of Liverpool’s refurbished Garstang Museum of Archaeology, in time for Liverpool Light Night.

The mummy’s name is not known, nor is it clear where in Egypt he lived.

And, to add further mystery, when he was brought back from North Africa more than a century ago by the University’s then Professor of Archaeology, John Garstang, he was contained in a coffin belonging to a Roman woman.

Garstang Museum Curator, Gina Criscenzo-Laycock said: “In a sense he is coming home to us.

“He was brought back from Egypt by John Garstang, founder of the University’s Institute of Archaeology, and became part of the Institute’s museum collection. When the blitz started in 1941, a decision was taken to evacuate him to the Department of Anatomy for safety.

“Various parts of the collection were sent out and most have come back to us. He is the last to return.”

The Garstang Mummy, as he has become known, played a vital role in the scientific exploration of the world’s most famous mummy, Tutankhamun. Many of the methods developed by University anatomists, Professor Ronald Harrison – who carried out the first x-ray on the boy king in 1968 – and Dr Robert Connolly were pioneered using the Garstang Mummy.

He will take up his new public position in the museum thanks to the acquisition of a climate controlled display case, made possible by a grant from the Friends of the University of Liverpool.

Gina said: “It’s important to remember that we are dealing with human remains, so we have got to be sympathetic to his beliefs. The survival of the body was very important to ancient Egyptians, as was the provision of food and drink to last the soul for eternity.

“The new case is the perfect place for preservation of his body, and he will also be in a room full of Egyptian funerary goods, which were all designed to help someone get to the afterlife and exist there comfortably. He will probably be surrounded by a larger selection of goods than he was originally buried with.

“It’s important to emphasise that we’re not treating him like a curiosity; he was a person and we feel we have a duty to do whatever we can to fulfil his beliefs.”

All Gina and her team know about the man is that he lived around 3,500 years ago during the 18th dynasty – like Tutankhamun – and died in his mid to late 20s, although it is not clear what he died of. Examination of his teeth, which are in very good condition, suggests he was likely to have held a relatively high status when alive. Often the teeth of the poor in Egyptian society were very worn.

And while there are many stories of curses, and other bizarre consequences, for those who first entered the mummies’ tombs, Gina says visitors have nothing to fear.

She added: “Nothing has happened to me yet!

“The curses were designed to keep away people who wanted to do harm to the body, and we want to help, so I don’t think we have anything to be afraid of.”

The Garstang Mummy will be unveiled in his new home as part of Liverpool’s LightNight, between 4pm and 9pm on May 15. To find out more, visit www.lightnightliverpool.co.uk/listings/#the-mummy-returns