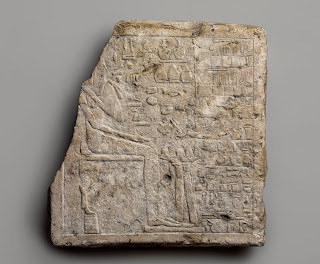 The Brooklyn Museum is proud and honored to have one of the oldest Egyptian female figures - the so-called Bird Lady. We have just updated our galleries with another very rare and most ancient representation of a woman. Dating back to the Early Dynastic Period (3100-2675 B.C.E.), this funerary stela shows its owner sitting in front of an offering table. Her offerings comprise everything that was deemed necessary for her afterlife, including food and drink, various oils, and linen garments. Unfortunately, the woman’s name remains a mystery because it was written in the only broken portion of the stela – the upper left corner.

The top of her offering table looks very much like the round stone table in a nearby case which is also dated to Dynasty 2. Following the fashion of the period, the leg of our lady’s chair is in the shape of a bull’s hind leg. An example of such a furniture leg is on display in the same gallery.