Ancient Mummies Meet Modern Medicine with "The Anatomy of the Mummy"

PHILADELPHIA, PA May 22, 2015—Mummies are fascinating to the general public. It turns out they are fascinating to scientists, too. Anthropologists, archaeologists and doctors and researchers in the medical community have been coming together for decades, now, engaging in interdisciplinary exploration of mummies from all over the world. What have they learned? What can modern medical techniques applied to long deceased humans tell us—and what techniques and practices hold the best promise for scholars eager to unwrap more about the human experience in the past?

Several years ago, Janet Monge, Penn Museum Curator of Physical Anthropology, connected with Jeffrey Laitman, Associate Editor of the scholarly journal The Anatomical Record, to bring together a range of scholars to discuss these questions at a Penn Museum public symposium. That 2011 symposium formed the kernel of an unusual June 2015 Special Issue of The Anatomical Record (available online beginning May 22), "The Anatomy of the Mummy."

"We wanted to bring together the growing number of people—medical and scholarly—who were actively engaged in this cross-disciplinary work. What could we learn from each other about how diverse procedures, applied to diverse mummy populations, are or are not providing new and meaningful data about our shared human past?" noted Dr. Monge.

Dr. Monge is guest editor with Frank Reuhli, Swiss Mummy Project, Institute of Evolutional Medicine, University of Zurich, Switzerland, on what has become an international mummies and science volume. Twenty-six research articles explore mummy studies, most employing state-of-the-art scientific techniques like CT scans, MRI and endoscopy, far more commonly used on living patients by the medical community, as well as newly developed techniques of Terahertz MRI imaging.  Mummies studied come from around the world, including Egypt, Korea, Sicily, Greenland, Peru, New Guinea, and Denmark. The development of a mummy database for future study, and consideration on the ethics of mummy studies, are included in the issue.

"The scope and depth of the topics makes this volume truly unique," noted Dr. Monge. "The Anatomy of the Mummy explores the challenges and emerging techniques for studying mummies under varied conditions of preservation including natural and artificial mummification as well as bodies preserved in bogs.  In addition to discussions of ethical practice and disease patterns in past human populations, authors discuss best practices of mummy conservation for future generations. These wide ranging topics will interest those in many fields ranging from anthropology to zoology." 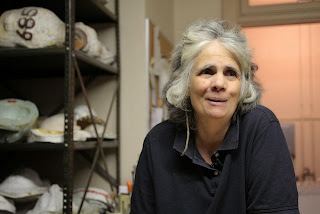 Dr. Janet Monge, Curator-in-Charge and Keeper, Physical Anthropology section, Penn Museum, and guest co-editor with Frank Reuhli, of "The Anatomy of a Mummy," the June 2015 Special Issue of The Anatomical Record. Photo taken of Monge in Museum storage, by Steve Minicola, Penn Communications. 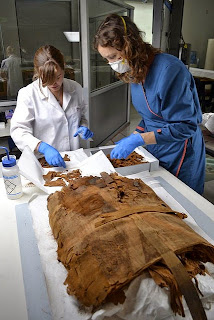 Penn Museum has a history of mummy conservation and research, and two articles in the special issue come from the museum: Molly Gleeson, project conservator for the Museum's In the Artifact Lab: Conserving Egyptian Mummies public lab and exhibition, collaborating with Dr. Michael Zimmerman, Adjunct Professor, Villanova University, offers an historic perspective on a famous Penn Museum mummy, PUM I, autopsied more than 40 years ago—and revisits the earlier mummy study with new techniques of analysis to learn more. Samantha Cox, Penn Museum scholar and a graduate student, University of Cambridge, UK, offers "A Critical Look at Mummy CT Scanning," reviewing the history and assessing the potentials, and the pitfalls, of high-resolution scanning, with particular attention on two Egyptian mummies in the Museum's collection.

Read more about the Artifact Lab and Molly Gleeson in the free premium article, The Mummy Doctors, published in the Fall 2014 issue of Popular Archaeology.

About The Anatomical Record and the American Association of Anatomists

The Anatomical Record: Advances in Integrative Anatomy and Evolutionary Biology, is a peer-reviewed journal, an official publication of the American Association of Anatomists, founded in 1906, and published by John Wiley & Sons. The American Association of Anatomists (AAA) was founded by Joseph Leidy in Washington, D.C. in 1888 for the "advancement of anatomical science." Today, via research, education and professional development activities, AAA serves as the professional home for an international community of biomedical researchers and educators focusing on the structural foundation of health and disease.

About the Penn Museum

Founded in 1887, the Penn Museum (the University of Pennsylvania Museum of Archaeology and Anthropology), 3260 South Street in Philadelphia, is one of the world's great archaeology and anthropology research museums, and the largest university museum in the United States. With nearly one million objects in the collection, the Penn Museum encapsulates and illustrates the human story: who we are and where we came from. A dynamic research institution with many ongoing research projects, the Museum is an engaging place of discovery. The Museum's mandate of research, teaching, collections stewardship, and public engagement are the four "pillars" of  its expansive mission: to transform understanding of the human experience.

Photo above: Project Conservator Molly Gleeson at work on a mummy In the Artifact Lab. Photo: Penn Museum.

A press release of the University of Pennsylvania Museum of Archaeology and Anthropology.