Last week I attended a conference on the complexities of moving and displaying objects from the tomb of Tutankhamun. These world-renowned artefacts, from perhaps the greatest archaeological find in history, have already begun to be moved from the Egyptian Museum in Tahrir Square to a new home in the Grand Egyptian Museum (GEM) in Giza, which will display objects focusing on the themes of kingship and eternity – including the Tutankhamun tomb group. International participants met between 10-14th May in various venues in Cairo to discuss possible approaches. 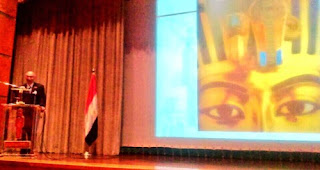 The issues posed by the move are manifold. How to conserve often very fragile objects that have rarely – if ever – left their 90 year old display cases? How to transport them safely? How to interpret them in their new display space? There is no doubt that Tutankhamun is a world-wide celebrity, and that his mummy mask is an iconic, instantly recognisable image of ancient Egypt around the world. Ever since the discovery of the tomb by Howard Carter and Lord Carnarvon in November 1922, the objects have spawned an interest in popular culture – 'Tutmania'. The ongoing interest in aspects of the discovery, clearance, and subsequent popular influence of the tomb's contents was well-illustrated in a recent exhibition – 'Discovering Tut' – at the Ashmolean in Oxford. 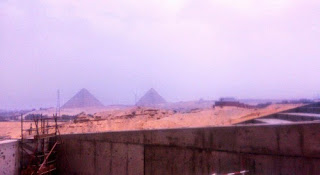 View from the Grand Egyptian Museum site towards the three pyramids at Giza. A visitor centre is planned for Spring 2016, with an initial opening in 2018.

But despite all this attention, Egyptologists often falter when asked to explain the importance of the tomb. And this is a significant part of the problem: Egyptology doesn't really know how to handle the success of Tutankhamun, and so the challenge for the new display will be to harness the extraordinary public interest in the Boy King and at the same time to correct assumptions and misconceptions about the king, the tomb, and ancient Egypt in general.

At the conference we discussed how to present individual objects and object categories, the broader historical context of Tutankhamun's time, and the value of digital interpretation. These are a set of issues many museums face, including here in Manchester. One big task is trying to distil recent scholarship and present it in an engaging way. Most visitors to the current Egyptian Museum in Tahrir Square are foreign tourists on package holidays; these people tend only have time to see highlights and so a priority will be to allow free flow of movement for these groups whilst also providing access for visitors with more time. A recommendation that was welcomed by participants is a dedicated space in the new Grand Egyptian Museum to showcase research – the everyday work of conservators and Egyptologists that increases our understanding of the objects. 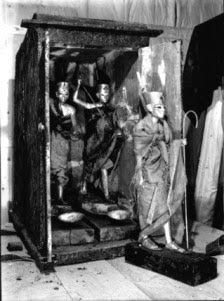 Burton's photo of statuettes wrapped in linen, from the so-called 'Treasury'

Another point of discussion centred on how to arrange the objects – for example, the ancient importance of objects being carefully wrapped in linen before being sealed in the tomb. While this is acknowledged by Egyptologists as endowing and maintaining the sanctity of statuettes of the king, deities and other ritual objects, the linen is often removed for display and is mostly unknown to visitors. I was interested to hear, therefore, about an option to 're-dress' some of the statuettes for display, as they appeared in famous 1920s photographs by Harry Burton.

Towards the end of the conference we discussed the value of replicas. Confirming my own impressions, colleagues from Germany reported that the majority of those who visited replica exhibitions of the tomb were more likely to want to go and see the original objects. This reflects a broader effect of Egyptian collections worldwide; having seen some objects, interested people will want to travel to see more. The innate public desire to know more is a big motivation for the team developing content for the galleries. I wish them luck in this impressive task; the initial opening of the GEM is expected in 2018.