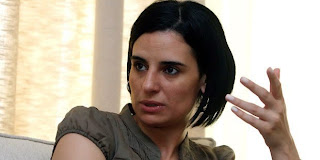 CAIRO: Almost a year after the Egyptian satirist Bassem Youssef’s talk show was aired off over criticizing media’s bias to President Abdel Fatah al-Sisi, another talk show has been suspended by a “sovereign body.”

However social media users circulated a video footage of the program talking on the dispersal of pro-Muslim Brotherhood sit-in at Rabaa al-Adaweya square, saying that the video could be the reason for the suspension.

“From four or five days ago, the channel administration told me a sovereign authority practicing pressures to stop the program on ON T.V.,” the program host Reem Maged told Akher al-Nahar T.V. show Friday evening.

“To halt or prevent a program is an attack on the citizens’ right of knowledge and choice. I did not receive a call from any official body to clarify the reasons behind the program suspension,” Maged added, “There are bodies take decisions and leave us to speculate the reasons.”

The talk show is being aired on Egypt’s ON T.V. channel on Fridays and on Germany’s Deutsche Welle (DW) channel on Saturdays.

Maged added that the talk show was suspended only on ON T.V. channel.

The show tackles several social issues from prospective of Egyptian women of all classes.

Social media users circulated a part of the program episode in which a photographer talking about the Rabaa al-Adaweya dispersal, saying “I saw a truck carrying dead bodies and people bleeding.”

On August 14, 2013, security forces forcedly dispersed the pro-Muslim Brotherhood sit-ins in which hundreds were killed, according to the government statistics while the international human rights organizations estimated the number of victims at more than a thousand.

Commenting on the suspension, satirist Bassem Youssef, whose program was also taken off-air last year, tweeted “Reem, stop injustice, was any program taken air off or was any channel pressured? Sure, it is a financial difference (between her and the channel), or the viewership is decreased, or you received compensation, or illusions.”

ON T.V. administration denied in a statement that the program was suspended upon “sovereign directives,” saying that “the journalist Reem Maged’s program was not suspended but it has been postponed until reforming the channel’s new plan.”

DW institution condemned the” Egyptian authorities’ interference to suspend the program broadcasting” in a statement Friday.

“The program suspension is a blatant assault on press and opinion freedom,” the channel added, noting that the third episode will be broadcasted in the German channel as scheduled.

Egypt’s Prime Minister Ibrahim Mahlab denied government’s interference to stop the program; “the government has not and will not intervene to stop the program and Egypt’s media is free as long as it committed to the professional principles,” Mahlab said in a phone call with talk show Momeken Friday.