In Ancient Egypt Isis was the South and Nephthys the North. - María Rosa Valdesogo


In Ancient Egypt Isis was the South and Nephthys the North.

In Ancient Egypt the Legend of Osiris was so important that it was integrated into the solar theology. As a result Isis and Nephthys, the two mourners of Osiris, became an essential part of some solar iconography, so both from the New Kingdom were depicted flanking the solar disk in its daily rebirth.

It also had an effect in the holy conception of geography in Ancient Egypt. If the rising sun occupied the east and the sunset the west, the two mourning goddesses had to be also located somewhere, so they had to have also a geographical assignation: north and south. At that point the titles of the two goddesses are quite explicit. In Ancient Egypt, Isis was “The One of the South” and Nephthys “The One of the North”.

These two points, the geographical relationship of Isis and Nephthys with south and north respectively and the involvement in the solar cosmogony, has also its expression in the art of Ancient Egypt. 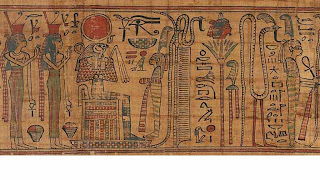 Book of the Dead of Nespakashuty. XXI Dynasty. Photo: www.louvre.fr

For instance, in the Book of the Dead of Nespakashuty (XXI Dynasty) the ancient Egyptian artist joined the two conceptions introducing some changes in the typical osiriac scene of Osiris seated in his throne and behind him the two standing goddesses Isis and Nephthys.

On one hand, the artist of Nespakashuty drew the solar god Ra-Horakhty, “Horus of the Two Horizons” (a combination of both deities, which formed a god of the rising sun, so the east) on the throne instead Osiris. On the other hand, behind him the two goddesses (the two mourners) were not identified as “Isis” and “Nephthys”, but as “The One of the South” and “The One of the North”.

It seems that here the ancient Egyptian artist pretended, not only to unite both, osiriac and solar, traditions, but also to allude to the geographical references of a typical funerary scene.