Discussions are underway on transporting the Tutankhamun treasures from the Egyptian Museum in Tahrir Square to the Grand Egyptian Museum on the Giza Plateau, writes Nevine El-Aref 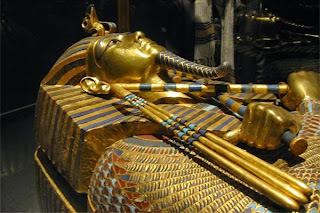 When construction work on the Grand Egyptian Museum (GEM) started in 2010 an exhibition design for the display the priceless collection of the ancient Egyptian boy king Tutankhamun was drawn up.

Today, all of the stored artefacts from the collection have been transported safely from the Egyptian Museum in Tahrir Square to the GEM, and another 2,500 pieces on display are waiting their turn.

The transport has been described by several Egyptologists as “impossible and risky” because the objects on display are often in a critical state of conservation, having not been restored since their discovery by British archaeologist Howard Carter in 1922.     Among the objects are Tutankhamun’s four gilded shrines, chariots, funerary beds, textiles and organic materials, as well as other fragile and precious objects.

The decision to transport the objects has been made, and they must be transported within the next three years for the soft opening of the museum in 2018.

In order for the transportation to take place as safely as possible, GEM Director-General Tarek Tawfik called a First International Tutankhamun Conference, which took place in Cairo last week. Scholars, curators and restorers from 15 countries gathered to discuss the issue and come up with recommendations.

Minister of Antiquities Mamdouh Eldamaty has also appointed a scientific committee to carry out a comprehensive study of Tutankhamun’s funerary mask, as well as the restoration work that has been carried out on it up to now.

After completion of the study, Eckmann will travel to Germany with the results, where he will create a replica of the mask. In mid-August, he will return to Cairo where an international conference will be held to explain the method selected to restore the mask and beard through state-of-the-art technology. The restoration itself is to start in September, and all the work will be documented.

Faiza Haikal, a professor of Egyptology at the American University in Cairo, said the ministry should not be in a hurry to meet the deadline for transportation of the Tutankhamun materials to the GEM, but instead should carry out the restoration work first.

“The restoration should be carried out in several phases, each of which can then be celebrated,” she said, adding that the conference had been very successful and had shown that scholars were willing to help to achieve these tasks.

“Providing training courses for curators is another very important recommendation of the conference,” Haikal said, explaining that upgrading the skills of Egyptian curators is essential for museological work in Egypt. “The GEM should be Egypt’s ‘lighthouse’ for ancient Egyptian civilisation and should be staffed with employees and curators having high skills,” she said.

Eckmann, who is involved in the restoration of the gold, leather and wooden fragments of Tutankhamun’s chariots, said that before taking any decision on transport it is necessary to answer questions that can only be answered by a comprehensive examination of the Tutankhamun collection and determining its current conservation condition.

CT-scans should be made of every piece in order to ascertain its internal condition and state of conservation, he said. “Not all the objects are in the same condition,” Eckmann added.

Studies should be done to choose the best way to take the collection from its current displays, to transport it to the GEM and to decide whether it should be transported in one lot or in batches.

EXPERT OPINION: Jaromir Malek, a professor at the Faculty of Oriental Studies at Oxford University in the UK, supported the transportation of the Tutankhamun collection because keeping it in its current exhibition location is a threat.

The current galleries do not have air-conditioning, meaning that the objects are vulnerable to varying temperature and atmospheric conditions. Moreover, the pieces are too closely packed together, not boding well for such a priceless collection.

“It is also a great opportunity to study the Tutankhamun collection, of which only 30 per cent has been examined since 1922,” Malek said.

Friederike Syfried, the director of the Berlin Museum, was very enthusiastic about the conference and expressed her museum’s willingness to provide the required experts to restore and transport the Tutankhamun collection. She told the Weekly that the international community should work together to achieve the best results and that the work should be done because the collection is unique in the world.

Regine Schulz, chief executive officer of the Roemer und Pelizaeus Museum in Hildesheim, said that several objects in the collection are very fragile, such as the textiles, wooden pieces and pots, and great care will need to be taken.

She said the exhibition design at the GEM is “excellent” and that a scientific centre for Tutankhamun studies and database of objects found in the tomb should be set up at the new museum. The exchange of experts and information between the Hildesheim Museum and the GEM will also assist, she said.

“We cannot grant financial support because governments are the only source of grants and not museums,” Schulz said, adding that she would report to the ICOM (International Committee of Museums) during its annual meeting in June on the move in order to assist in restoring and transporting the Tutankhamun collection.

Salima Ikram, a professor of Egyptology at the American University in Cairo, said the main obstacle could be the lack of a suitable budget. “We have local and international expertise that could easily do the restoration work, but funding is the main issue,” Ikram said, adding that the budget could reach LE1 billion.

In order to find the money, Egypt will need to regain its tourism industry, which will increase the country’s income and boost the economy.

Hassan Selim, a professor of Egyptology at Ain Shams University in Cairo, suggested that the Egyptian Museum in Tahrir Square should be dedicated to the display of the Tutankhamun collection, but it was now too late for such a suggestion.

“The conference was very successful and highlighted the importance of the boy king and his collection worldwide,” Tawfik told the Weekly.

He said the conference was on the international archaeological conferences agenda and would be held every year even after the transportation of the collection and the official opening of the GEM.

The soft opening of the museum in 2018 will put on display only 70 per cent of the collection as the rest of the objects will still be under restoration because of their fragile condition, which requires further time for investigation, restoration and conservation.

STUDY AND DOCUMENTATION: “The objects are too precious to be treated and transported under time pressure,” Tawfik said, explaining that such objects include the four gilded shrines, the chariots, the funerary beds and the textiles and organic materials.

“These objects are unique and need special attention and care,” he said, adding that the Museo Egizio in Turin and the state museums in Berlin had offered to provide experts, a transportation timetable and training courses for curators. They could also provide master plans to serve as a model for the GEM.

Before transportation, Tawfik said, full documentation of the present exhibition in the Egyptian Museum should be undertaken in order to preserve its museological history. All further treatment and transportation will need to be documented and recorded in a database.

“Photographic documentation needs to be provided to assess the current state of the objects, and a master plan to monitor, map, treat, pack, transport and reinstall the objects must start immediately,” he said.

To guarantee the best treatment of the objects, Tawfik said that scholars have recommended that the Egyptian Museum consider giving the documentation and conservation teams the option to work after opening hours.

Minor material samples from the objects that are already detached and unrestorable will be made available for analysis to promote research and enrich the information available about technology in the time of Tutankhamun, he said. “This is one of the themes which will be addressed in the new display,” he added.

He also suggested carrying out the transportation in batches and making special transport arrangements with experienced international art handling companies for the fragile pieces.

Once the GEM has opened, a special exhibition space will be provided where visitors will be informed about the progress of the investigation and treatment of the objects. The study room will be connected to the scientific centre for Tutankhamun studies and all information will be made available online.

Tawfik said that the Tutankhamun galleries will be finished gradually and each new addition to the collection will be presented as a special event at the GEM for national and international audiences.

“Additional plans for museum education, as well as public relations, will be established with their own working groups,” Tawfik said.