Smith expressed his amazement of the magnificence of Ancient Egyptian culture, stating that he ‎had always dreamed of being an Egyptologist 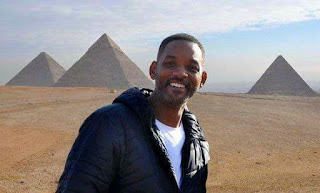 In an attempt to promote tourism and support foreigners' visits to Egypt, American movie star Will Smith arrived to Egypt on Sunday morning with his family for a short visit, according to a statement published by the Ministry of Antiquities' official Facebook page.

The celebrity landed in Cairo early morning, where he had breakfast at the pyramids with renowned archaeologist Zahi Hawas, before taking a two-hour tour of the Sphinx and the Pyramids of Giza. Hawas and Smith met before dawn and got to witness the sunrise above the pyramids.

With nine of his family members, Smith listened to Hawas telling him about the secrets of the pyramids and the hidden legacy which is still being discovered step by step.

The tour included members of the Ministry of Antiquities, including Ashraf Mohy El-Den, director-general of the Giza Plateau, who described Smith's amazement while exploring the area. 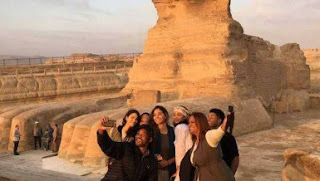 "Smith was impressed with the Pharaoh's legacy, and he stated that he was obsessed with it ever since he was a little kid and always dreamed of being an Egyptologist in order to discover the secrets of the Pharaohs," Mohy said.

Hawas expressed his happiness about Smith's visit to Egypt, especially since it came 10 years after Hawas had invited him to come to Egypt, after they had met for the first time in 2006 when they were both selected to be among Time magazine's 100 Most Influential People.

The former Minister of Antiquities told privately owned newspaper Al-Youm Al-Sabaa that Smith admiringly stated that "this visit is the best trip he has ever taken in his life and that Egypt is more beautiful than he had expected."

Smith was nominated for the Oscars twice. The first time was in 2002 for his film "Ali." The second time was in 2007 for his leading role in "The Pursuit of Happiness."