Openings in the oasis - Ahram Weekly

Openings in the oasis 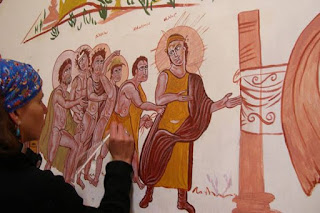 Openings in the oasis

In the northwest of the Dakhla Oasis in Egypt’s Western Desert is the mediaeval village of Al-Qasr with its mudbrick buildings, alleys, mosques, Pharaonic temple and seed mill. Its serenity was disturbed earlier this week when Minister of Antiquities Khaled El-Enany along with Al-Wadi Al-Gadid Governor Mohamed Suleiman Al-Zamalout and Netherlands Ambassador Laurens Westhoff and other officials opened three houses and a villa in Al-Qasr to visitors after the completion of conservation work.

El-Enany described the work as “wonderful” and “one of the ministry’s most important achievements”. He said that the Al-Qasr village was one of the most important Islamic settlements in Egypt, not only because of its distinguished architecture but also because it was the meeting point of several trade routes as well as being on a main route for pilgrimage.

The newly inaugurated buildings are in the Rabaa Al-Shihabiya area of the village and include the Beit Al-Qadi, the Beit Al-Qurashi and the Beit Othman. The remains of the fourth-century Villa of Serenus, once a council member in Amheida (ancient Trimithis), were also restored and reopened.

Ahmed Al-Nemr, a member of the Ministry of Antiquities’ Scientific Office for Islamic and Coptic Monuments, told Al-Ahram Weekly that the Serenus Villa had been uncovered in 1979. While surveying the late antique city of Amheida, a team from the Dakhla Oasis Project had discovered the upper part of the Villa’s lavishly decorated walls, he said.

The main building, including decorated rooms, was subsequently excavated in 2004 and 2007 by a team from Columbia University in New York directed by Roger S Bagnall.

Well-preserved decoration was found in four rooms depicting geometrical patterns as well as figurative scenes. “At the time of their discovery, both the paintings in situ and the collected fragments posed considerable conservation problems,” said Fred Leemhuis of the University of Groningen in the Netherlands.

He explained that the layer of plaster was very thin and extremely fragile. The best way of conserving this precious building for future generations was by refilling it with sand after extensive documentation, Leemhuis commented.

“Because this unique villa would be destroyed by being exposed to the public, a plan was made to build a full-size reconstruction of the main house,” Leemhuis said.

Al-Nemr said that in order to recreate the full splendour of the building a decision had been taken to reconstruct the painted decoration. The project has been financed by a grant from the Embassy of the Netherlands in Cairo and administered by the Netherlands-Flemish Institute in Cairo.

Soon after archaeologist Nicholas Warner had finished work on the building, a decoration team led by Dorothea Schulz moved in and started reconstructing and recreating the decoration.

In a report in the newsletter of the Netherlands-Flemish Institute in Cairo, Schulz wrote that the decoration of the two smaller rooms consisted of an intricate geometrical pattern. The biggest room, the Domed Room, was completely decorated from the floor to the highest point in the dome. There are geometrical “wallpapers” all around the room, the report said, composed of many different patterns.

While the wallpapers are still in situ and could be copied without problems, the dome had collapsed in antiquity and had taken a lot of work to reconstruct from thousands of fragments, the report said.

The Serenus Villa replica was inaugurated during the minister of antiquities’ visit as a visitor centre. El-Enany described the reconstruction work as “spectacular and well worth a visit”. “The replica villa is a complete example of how top officials or a family of high social status built and decorated their homes in antiquity,” he said.

Photographs and banners showing the detailed work are also on display, as well as photographs of the villa’s original condition. 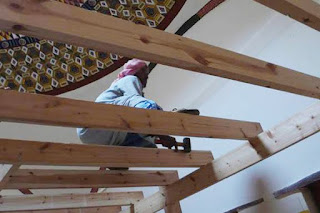 
HOUSE RESTORATION: Three houses were restored within the framework of the Qasr Dakhla Project started in 2002 by a team from Groningen University and the Netherlands-Flemish Institute in Cairo.

The project, Leemhuis said, aims at documenting and restoring some of the unique mudbrick architecture of the Al-Qasr village and at the same time tries to find out as much as possible about its history.

Over the years, the team had been able to restore or reconstruct five large houses, some of them four-storey buildings, he said. Some 600 documents had been found in the largest house, all part of a family archive.

“Since the end of 2006, we have tried to obtain permission to introduce water and electricity to the houses. The idea was to make them ready for contemporary use, so that they could be maintained in good order. We have now put the first electrical conduits in place,” he said.

Al-Nemr told the Weekly that before the restoration work the three houses were in a very bad condition. Horizontal and vertical cracks had spread all over the walls, some parts of the walls and ceilings were missing, and rooms were filled with debris, he said.

The lintels of the houses have dates going back to the Ottoman period. The houses were reconstructed using original construction materials and according to the traditional techniques used in the original houses, Al-Nemr said. The materials used included wooden supports and mudbricks, with roofs made of palm fibres and mud.

Clearing the rubble in the houses had uncovered a treasure-trove of household items such as jars, bowls, baskets and more than 500 documents. “These materials add more information to our understanding of the lives of the settlement’s inhabitants,” Al-Nemr pointed out.

On further investigation, Leemhuis wrote in his report, it turned out that the items had been left in a hurry and some were in excellent condition, although dating back only to 1890.

Various sources have revealed that the Beit Al-Qadi collapsed in the 1930s, and its inhabitants had to run for their lives with little time to rescue their possessions. The incident happened after an internal wall was removed to make more space for the growing family living there at the time.

It is not known how many of the family perished in the tragedy, but their mishap spurred a new direction for the project: to retrieve the documents and investigate the history of the site and reconstruct it after clearing 800 m3 of rubble.

“The most interesting of the 600 documents found in the rubble of the collapsed Beit Al-Qurashi were a collection of 58 personal letters,” Leemhuis said. He added that these letters were from and to members of the Al-Qurashi family that once lived in the house and provided insights not only into social and economic life, but also into personal feelings.

Many of these letters had been stored in the family archive, together with 170 legal documents. Eight were found in a different location, all from sender Hassan Abdallah and all intended for Hassan’s mother Halima Othman Mohamed Saleh Al-Qurashi.

“These eight letters provide us with a wealth of information about life in the isolated oasis settlement of Al-Qasr at the end of the 19th and beginning of the 20th century,” Leemhuis wrote. A collection of 1907 tax documents belonging to Halima Othman was also found. 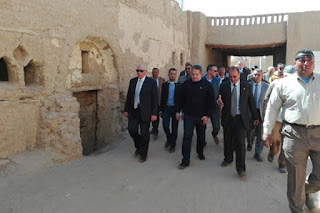 El-Enany during the opening of Al-Qasr’s restored houses


Leemhuis said that she had been up to date with her taxes and had paid the equivalent of PT18 in taxes in 1907. An impression of her seal was on the side of the documents, he said.

More than 80 folded documents dating back to 1579 were also unearthed, including a long legal document which had to be framed to preserve it. “The documents convey an overall impression of a highly developed social structure in this desert oasis, which prospered many centuries ago,” Leemhuis commented.

Further excavations have revealed several strata of habitation, with the deepest layer dating back to Fatimid era. One item found was a green glass weight with the inscription of the caliph Al-Mustansir Billah Al-Fatimi (1036-1094 CE) appearing upon it.

During the survey of the northern part of Harat Al-Shihabiya, excavator Wolf Schijns found a mudbrick wall extending downwards for about three metres. This wall is part ofa pre-Ottoman building, and its stone foundations are approximately at the same level as the lowest level of a trial trench dug in 2004 in front of the Beit Al-Qadi and Beit Al-Qurashi and corresponding to the Fatimid period.

The situation of the wall underneath the foundations of the houses, together with the thickness of the wall and the measurements of its mudbricks, make it highly likely that it is the remnant of a Roman defensive wall, Leemhuis said.

Six metres of the wall still standing to the east of the area’s old mosque built of mudbricks of the same size may well be the remnants of a gate building or a bastion. However, further investigation is needed to determine the extent and period of the remains.

Leemhuis said that an aerial photograph from the 1960s showed the probable remains of a wall parallel to the discovered wall visible to the north just outside the built-up area.

“It is conceivable that these were the remnants of the northern wall,” he said, adding that this could not be checked because new houses had been built in the area.