http://british.museumblog.org/giving-a-voice-to-ancient-egyptian-poetry/
Giving a voice to ancient Egyptian poetry
How do you capture the ancient resonances of phrases that mean nothing to modern audiences? How do you invest them with meaning and emotion without a set of explanatory footnotes that kill all spontaneity? Oxford University professor Richard Bruce Parkinson worked with actress and writer Barbara Ewing to record a dramatic reading of one of the finest works of Egyptian poetry The Tale of Sinuhe. 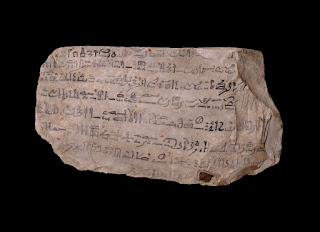 Ostracon with the final lines of The Tale of Sinuhe. Thebes, 19th Dynasty.

I'm working on a new commentary on the famous ancient Egyptian poem, The Tale of Sinuhe, which has fascinated me since my schooldays. This narrative, about an official's troubled life-story was written in about 1850 BC and survives in many manuscripts, including one in a collection of texts that was buried in a tomb at Luxor in around 1680 BC, and is now known as the Ramesseum papyri. My work is part of an ongoing joint British Museum and Oxford University project on the Ramesseum papyri, during which we have published new photos of the main papyri in an online catalogue, and in a DVD with the Egyptian Museum, Berlin. I'm also re-examining the copy of the poem in the Ashmolean museum, helped by research assistant Ann Gill, and (perhaps most importantly) every year I read the poem with students, because it is an undergraduate set text in the Oxford Egyptology course.

However, while academic commentaries can deal easily with the technical details of reading the manuscripts, of the verb-forms and the lexicography, the poem is also a hugely emotional work of art. In order to try to capture a sense of what the poem might have felt like to its original audiences – a sense of what E M Forster termed 'the union of shadow and adamant that men call poetry' – I've worked with actors over the past decade, including Gary Pillai and Shobu Kapoor. Most often, I've worked with a very good friend, Barbara Ewing, who is a historical novelist as well as an actress, and so understands as well as any Egyptologist the difficulties we face when dealing with old texts. We've worked together on several Middle Kingdom poems, and she accompanied my inaugural lecture at Oxford which was about a single couplet of Sinuhe. Now she's recorded a full reading of Sinuhe.

The problem with any poetry is that it is untranslatable, and Sinuhe is now very remote; Barbara said that she found it the most challenging piece she has ever had to deal with. How do you capture the ancient resonances of phrases that mean nothing to modern audiences? How do you invest them with meaning and emotion without a set of explanatory footnotes that kill all spontaneity? For me the point was to let Barbara bring her skills to illuminate the poem, and to teach me what it could be like in performance. We've discussed it over several years, and when we started rehearsing Barbara dug deeper and deeper into the text. We only squabbled once over how a line might be delivered (we're both quite stubborn, neither of us gave way, and I'm delighted with the solution we reached). The translation we used was based on the one published in an Oxford World Classics anthology, but she suggested several small changes to help a modern listener, usually clarifying a pronoun or reversing the order of two verses. I also made several minor alterations to help clarify the sense for listeners unfamiliar with the ancient background, such as saying 'War-god' instead of the god's name 'Montu'. I kept asking friends at my college if certain phrases sounded natural to them, so that none of it would sound written in Egyptological-ese. When Sinuhe returns home and is re-integrated into Egyptian society, his hair receives some sort of treatment, either styling or cutting, and so I ended up asking 'what do you usually ask for at the barbers? What word do you use?' 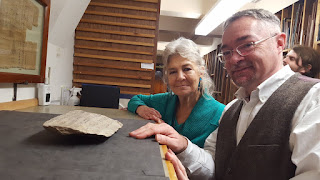 Sinuhe is quite a long narrative poem – almost 600 lines of verse – and I think it was hard to convey sense of changing pace and structure, among the many other obstacles. Barbara was determined that it should not sound falsely grandiose (like the dreadful Hollywood film of the poem), and to keep it very internal and understated, even as the hero undergoes a series of emotional crises and breakdowns. The poem has a lot of exciting action in it, but it also moves by subtext: characters talk to each other but mean much more than they actually say, and it deals with 'unrepeatedly great matters', raising questions of motivation that are left unresolved. There had to be a sense of things happening beneath the surface.

We spent three days rehearsing in London, and then Barbara came for a full day's recording at an underground studio at Oxford University Media Services. At the end of the day we went and looked at the copy of the poem in the Ashmolean Museum together. The unedited recording, made by Karen Casey, lasted an hour and 46 minutes and included repeats, various retakes and variations. The final cut is 41 minutes long and is available on Oxford University's podcast website and iTunes.

The Life of Sinuhe read by Barbara Ewing. Translated by Richard Bruce Parkinson. This recording is part of The Tale of Sinuhe: A Reader's Commentary (for the British Museum and Oxford University Ramesseum Papyri Project).

My favourite line of all is perhaps when Sinuhe's patron, Queen Nefru, screams in shock as she recognises her old servant. We debated whether Barbara should add an actual scream (as she did in the inaugural lecture about this couplet) or instead keep strictly to the words of the original, and try to convey the shock with only the words of the poem? We did several takes, but when I listened to the unedited recording there was no doubt for me: Barbara's words alone conveyed the scream without it needing to be acted out.

It is one thing to write about performance from a theoretical perspective, but it's another to work with an actor. I learnt so much about the poem from our sessions together, and my only regret is that a month later while I was re-examining photographs of one of the papyri, I spotted a new solution to a long-standing grammatical difficulty, meaning that one verse of the reading should really have a slightly different tense. But no translation or performance is ever going to be definitive.  What matters to me, beyond these philological details, is that Barbara has found a voice for the heart of this ancient poem.

Want to hear more? Listen to the the inaugural lecture of Richard B. Parkinson as Professor of Egyptology, accompanied by actress and author Barbara Ewing, on the emotional power of the famous Ancient Egyptian poem The Tale of Sinuhe.