Review Excerpts for _The Book of the Dead_ by Orikuchi Shinobu

Orikuchi Shinobu - At once a work of innovative fiction, written in an evocative and poetic style, as well as a remarkably astute recreation of the natural, mental and spiritual world of Japan’s ancient civilization 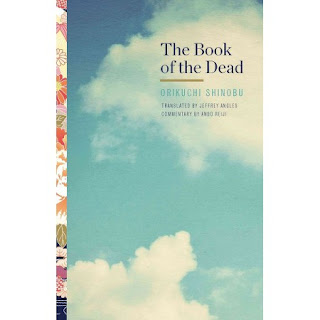 Orikuchi Shinobu, The Book of the Dead, Trans. by Jeffrey Angles, University Of Minnesota Press, 2017.

First published in 1939 and extensively revised in 1943, The Book of the Dead, loosely inspired by the tale of Isis and Osiris from ancient Egypt, is a sweeping historical romance that tells a gothic tale of love between a noblewoman and a ghost in eighth-century Japan. Its author, Orikuchi Shinobu, was a well-received novelist, distinguished poet, and an esteemed scholar. He is often considered one of the fathers of Japanese folklore studies, and The Book of the Dead is without a doubt the most important novel of Orikuchi’s career—and it is a book like no other.
Here, for the first time, is the complete English translation of Orikuchi’s masterwork, whose vast influence is evidenced by multiple critical studies dedicated to it and by its many adaptations, which include an animated film and a popular manga. This translation features an introduction by award-winning translator Jeffrey Angles discussing the historical background of the work as well as its major themes: the ancient origins of the Japanese nation, the development of religion in a modernizing society, and the devotion necessary to create a masterpiece. Also included are three chapters from The Mandala of Light by Japanese intellectual historian Ando Reiji, who places the novel and Orikuchi’s thought in the broader intellectual context of early twentieth-century Japan.
The Book of the Dead focuses on the power of faith and religious devotion, and can be read as a parable illustrating the suffering an artist must experience to create great art. Readers will soon discover that a great deal lies hidden beneath the surface of the story; the entire text is a modernist mystery waiting to be decoded.


"At once a work of innovative fiction, written in an evocative and poetic style, as well as a remarkably astute recreation of the natural, mental and spiritual world of Japan’s ancient civilization, The Book of the Dead, long recognized as a modern classic in that country, is now widely accessible for the first time to readers everywhere, thanks to this eloquent translation by Jeffrey Angles. Orikuchi’s work will prove fascinating to any reader with an attraction to literature, anthropology, psychology, or history. There is no other work quite like it in the whole modern Japanese canon."—J. Thomas Rimer


"Orikuchi has fairly haunted modern Japanese literature, and now Jeffrey Angles, in making his The Book of the Dead available in English, helps us understand why. Set eighth-century Japan, Orikuchi's 1943 historical novel illuminated and challenged Japan's twentieth century with this tale of a past emperor who discarded human lives, a story whose publication amidst a world war makes Orikuchi one of the bravest of all modern Japanese writers. Angles' erudite Introduction and Ando Reiji's critical essays alone make this translation worth its price."—John Whittier Treat


"Jeffrey Angles has given us a smooth, supple translation of this remarkable book, and thanks to him, Orikuchi's glorious evocation of the distant past will live on in our contemporary world. The sounds of the ancient Japanese language may have disappeared, but in this translation, the text has been reborn with all the strength and grandeur of ancient societies everywhere."—Hiromi Ito

A vision is shared among multiple people, some dead.

In this vision, voices proliferate. Names proliferate. Senses bleed into senses in the sense that the lips of a dream lover might smell like their hue, in this case: vermilion. Some, while in the thrall of this vision, might make the leap to cinnabar to sulfides to mercury to poison. Others smell the indescribably beautiful.
Orikuchi Shinobu (1887-1953)—author of this vision: The Book of the Dead—was a man split across time. In his introduction to the book (called “Bring the Dead to Life”), translator Jeffrey Angles describes an author ahead of his time, an author bent toward progressive deconstructionism, sliding criticism of the Japanese imperial institution past the prewar censors by inhabiting voices, names, and knowledge from what was considered ancient past. Ancient is never distant for Orikuchi and the Dead; as Angles notes: “Orikuchi was frequently in motion, wandering throughout Japan and its empire, seeking to understand the ways that premodernity and modernity mingled in actual lived, embodied practice.” The result, this mingled vision, is dense: shell game of analogy and layered allegories. Shared historical memory is in a state of flux, a process of revealing and obscuring and revealing on loop. A reader’s share in this vision might require frequent trips to the back pages where an associative glossary, a collection of essays and commentary by Andō Reiji, and the copious and lucid footnotes by Angles confirm Orikuchi’s notions of a spectre-stuffed world constantly and  blithely projecting its present over its past.
This vision is a lot to take in. A central character, a prince who wakes up from the dead (from whose shining apparitional lips another character detects the scent of vermilion), is a kind of stand-in for the historical prince Ōtsu, something made apparent by a number of poems cited in the book, once this connection is established by the reader (in this publication, with the help of the translator), other characters with associative names or referential backstories build up historical context for just a single allegorical layer. Ultimately, an understanding of the dead prince in the story carries not only the weight of the real Ōtsu’s political intrigue, his character assassination and real-life execution, but also of countless other connections. This vision is a lot to take in, and the impression that the novel is simply allegorical and/or historical fiction is slightly misleading.

The pattern of obfuscation and analogous webs extends to an endlessly astounding figurative compulsion in The Book of the Dead, a compulsion toward sensory bleeding and complex synesthesias. Just as the lips of a dead lover might smell like a hue, one might “hear the moon sliding across the sky” at the same moment that a mountain’s trees “stir noiselessly.” While not quite psychadelic, a constant narrowing of one sense into wild focus and consequently surprising intrusion of another overwhelms the palette of the reader experiencing this vision. The maiden from the Southern Branch of the Fujiwara Clan, arguably the novel’s protagonist, falls seamlessly into a dream with a ghost with white jade fingers and seamlessly awakes only realizing her dream due to the strangeness of reality: “the orbs of the moon were trembling on the ceiling just like before, cast by the oil lamps.” The way in which the fluctuating sensory experience helps characters make meaning in reality guides the reader through both what is strange and what is banal in this vision. Trust is established as a kind of illuminated madness, like the heliotropic tug on a maiden convinced she must spend the daylight following the sun.

Voices intrude just like senses do, in fact and maybe of course: the two are often inseparable. A character’s thoughts, dreams, memories, and dialogue might be interrupted by another character’s speech written in a distinct style which then takes over the text with equally distinct thoughts, dreams, memories, and dialogue. Of course, each of these characters sits at the end of a string of associations of proper names, places, and political history. While each is drawn to the central story (for the most part: the maiden from the Southern Branch of the Fujiwara clan pursuing the vision of the dead prince), each has their own interests and detours.
I remember how I felt the first time I closed The Book of the Dead—from a certain point of view: 338 pages including introductions, sidenotes, footnotes, a novel comprised only in part of prose, lyricisms, borrowed poems, original poems, a glossary of names and places, essays, and acknowledgements either by, about, for, or somehow connected to Orikuchi Shinobu. I felt like I knew very little about Orikuchi, about his writing and life. I felt intrigued and compelled like I have in the past by writers and artists like Franz Kafka, Yoko Tawada, and Abbas Kiarostami to dive deep into an ouevre and everything surrounding and adjacent to that body of work. And however deep one delves, there’s always a feeling of having just scratched the surface of a living, growing brilliance to the visions shared by these and other artists. I want to read everyone they read, watch movies they watched, and read the writing of everyone who has read them in the meantime. This is the start of an artistic addiction and a welcomed new infection.

This is a novel that believes in its own power, the empathic and transportive tricks peculiar to the written word. This is also a novel dedicated to the implications of those powers in an embodied present. In “Language and the Making of Place,” one of many astute turns made by  geographer Yi-Fu Tuan is acknowledging the ways in which even those ignorant of the history of a location can unknowingly shape and be shaped by that inescapable history. He destablized other geographers’ “long-held belief that geography is the description of the earth, and that words which simply describe have no power to bring about change.” Characters in The Book of the Dead have instable relationships with place and history (often reflected in the complex history of the characters’ names). At one point, a narrator describes a double-edged short-sightedness: “In the lives of people who had little relation to the written word, a mere hundred years—a span of time that one might call short in the grand scheme of things—seemed just as far away as the ancient past.” And in another lengthy and fascinating detour from what I keep hesitating to call “the main story” (in part because the atmospheric accumulation of these detours feels so vivid and vital to other parts of the novel), the reader absorbs a complex architectural history concerning stone walls believed to keep out disease-spreading and misfortune-causing demons. As imperial regimes and fashions change over time, the protective stone walls are destroyed, illegally preserved, or transported. These changes leave lasting scars on the psyche of communities: “Those terrible events now felt like a dream to many people. Still, they were burned vividly into the memories of others. For them, the epidemic was all too real and showed how terrible the world could be.” For Orikuchi, historical consciousness and collective memory are just as powerful as they are fragile. This is a novel and a vision shared ever more broadly:  “There are times when multiple people experience the same vision at the same time; sometimes even during the middle of the day. Perhaps what the astonished onlookers saw that day just happened to be one of those visions.” - Jace Brittain


Orikuchi Shinobu (1887-1953) was a Japanese ethnologist, linguist, folklorist, novelist, and poet. As one of the foremost early twentieth-century experts of Japanese folklore and Shinto, he has exerted vast influence over modern intellectual discourse. Many of his novels and collections of poetry are classics of Japanese literature.
Posted by Glenn Meyer at 7:47 AM