Uncovering the Dead at a Victorian Mummy Unwrapping Party | Broadly

Uncovering the Dead at a Victorian Mummy Unwrapping Party

In the 19th century, upper class society got their kicks from unraveling Egyptian mummies to see what lay beneath. I went to a re-enactment of the creepy practice in London.

The Victorians really had a taste for the macabre. When they weren't spending hours posing for photos with their propped-up dead relatives they were trying to contact them at séances or going about their daily business wearing jewelry containing their hair.

But one of the most ghoulish—and lesser-known—ways upper-class Victorians got their creepy kicks was by hosting and attending mummy unrolling parties. The host would buy a mummy from an auction or a specialist dealer with contacts in Egypt, then the invites would go out.

As they described what they were finding to an audience, a host would take off the body's bandages to see what was hiding underneath, in the name of both scientific discovery and entertainment. These events happened at the height of Egyptomania—a sweeping craze where people's interest in this aspect of ancient history grew to incredible heights.

Some events—namely the ones by a surgeon called Thomas Pettigrew—attracted around 3,000 people. Pettigrew wasn't the first person to unwrap a mummy, but he was the first to turn it into a spectacle. If you think immersive theatre was invented in the 20th century, you're wrong—you can trace it all back to Victorians like this dude.

I headed to Bart's Pathology Museum in London, where I was promised I'd be transported back to the Victorian era of Egyptomania by "scentertainor" and perfume expert Lizzie Ostrom, a.k.a. Odette Toilette, and Egyptologist John J. Johnston. Tonight the pair will follow in Pettigrew's footsteps, and recreate a live mummy unrolling—with all the "drama, thrills and smells" of such occasions.

Walking into the museum to the sounds of the Bangles' 1986 banger "Walk Like An Egyptian," I was immediately handed a couple of drinks tokens. "You can have sherry, Madeira, or straight gin," the woman behind the makeshift bar tells me. I go for the sherry. I immediately regret it. "Why are the drinks so strong?" I cry, wishing for a nice glass of merlot. Apparently rich Victorians liked to get absolutely wasted as they watched an ancient corpse get desecrated. Maybe they needed something strong to take the edge off.

As the mummy is prepped for unraveling, we're given the chance to stroll around the museum and take in the specimens on display. There are over 5,000 medical samples here, and I spend a little too long looking at a gross swollen, gouty human toe suspended in formaldehyde. You really can't argue that a pathology museum is the perfect location for an event like this. 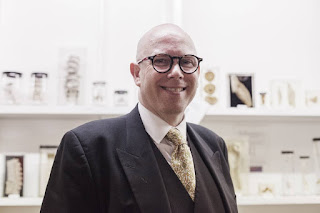 Carla Valentine, the curator of the Pathology Museum, says there's around 100 people attending the event tonight, and I quickly realize like me most of them have no idea what to expect from the evening. "I'm the wrong person to be asking why I'm here," Megan, 36, admits. "My friends had a spare ticket for what they described as this faux-Victorian thing, and I thought, 'Why not?' I've never really been to anything like this before."

"I'm just excited to experience something very similar to what some people saw over 100 years ago," Jaimee, 38, tells me. "What it was really like to go to one of these was a mystery, so this is the closest thing to reliving that." 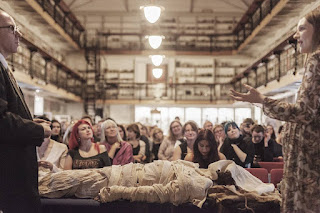 Soon the time we've all been waiting for arrives, and the mummy is wheeled out. The brakes have been left on the medical trolley it's placed on so there's about two minutes of intense screeching that sounds like budget horror movie sound-effects—we're told that wasn't intentional, but it definitely adds to the weirdness of it all.

Johnston and Ostrom cautiously pull back the purple velvet blanket, revealing a slender body covered in wrapped in shredded bits of linen cloth. But wait—is this mummy breathing? At first, I put it down to the fact that I've just downed a large amount of fortified wine in a short period of time, but no, there's clearly a very still, but living, person under there.

Ostrom is known for her scent-based events, which are a bit like a live version of a scratch'n'sniff sticker set. "I'm always looking for interesting ways of bringing the sense of smell to life," she tells me. "I read that these [mummy unrolling] events happened, and they seemed like such an esoteric part of London's intellectual and entertainment scene, so I thought why not try and put one on?" 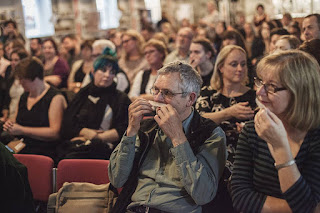 Smells are an integral part of tonight. As Johnston cuts through the bandages, scent strips are passed around while Ostrom describes them. The first evokes the tobacco that would have been smoked by the Victorian host—it's delicious, more akin to caramel. We sniff green beeswax from the linen wrappings and myrrh—it shows the important status of the mummy (ours, we are told once Johnston discovers papyrus with hieroglyphics, was once a priest). It's scintillating and not dissimilar to the oud used by my Iranian relatives. We also pass around a bowl of moss that was used as padding, similar to wire wool in a taxidermied animal and I get to hold a metal ankh—the ancient Egyptian symbol of life—in my hand.

The mummy's body is covered in juniper berries, which were often found in old Egyptian tombs. I take a deep breath and inhale the scent of them. Unfortunately, the first thing that comes to mind is a memory of necking straight gin in my college bar ten years ago. I spent that night puking into my dorm room sink while weeping. I'm not enjoying reliving it. 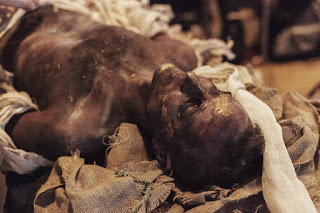 An actor, painted brown and gold, plays dead for the mummy party.

Johnston manages to cut through the bandages covering the chest, and suddenly I'm distracted from my harrowing reminiscence by the mummy's heaving gold-painted nipples, which match his gilded fingernails. Apparently, the nails of Egyptian mummies were painted to stop them getting ruined during the embalming process—as for the nipples, I have no idea.

Then it's time to wrap things up. When the ancient Egyptians embalmed the dead, they would pull the brains through the nose, liquefying whatever was left inside. Pettigrew and his peers would crack open the skull to show there was nothing there. "However, I'm not going to do that," Johnston says, as the mummy stands up to rapturous applause. It is, of course, a living male actor who has been covered in brown and gold paint and told to play dead—modern day medical ethics mean corpses are treated with a lot more respect than back in the 1800s. 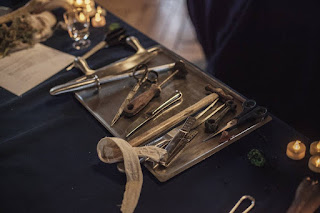 A tray of Victorian surgical implements traditionally used for a mummy unwrapping.

While the 'mummy' at this event was able to get up from the table and walk off, I wonder what became of the mummies' bodies after the spectacle of the unwrapping was over back in Victorian times. The answer is very grim. Though a few ended up in museums, Johnston says a lot of them were sold to manufacturers who ground them up and turned them into paint—a rich color called "mummy brown" that was popular with the pre-Raphaelite painters.

"They ended their days decorating the homes of high society," he says. Other human and feline mummies (cats were worshipped as gods in Egyptian times) were ground up and reportedly used as fertilizer. "One wonders what—and who—we lost because of this," Johnston adds. 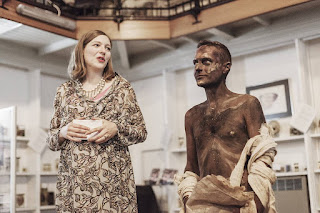 Odette Toilette with the "mummy."

Mummy unwrapping was undoubtedly popular with the Victorians. But like many trends—normcore, Pokemon Go, killer clowns—it had its time in the sun and then society swiftly moved on. I ask Johnston why this is.

"When Pettigrew did his unrollings, they were usually the same each time—and I think the public wanted more than that," he says. "Around the time mummy unrolling fell out of fashion you get the mummy stories, such as [Sherlock Holmes author] Sir Arthur Conan Doyle's short stories about them coming back to life, then you get all the rumors about curses. It provided a better frisson for the audience than just seeing a dead body."

The last known mummy unwrapping happened in 1908 in Manchester. It was undertaken by the first woman to be appointed as a lecturer in archeology in the UK, Margaret Murray, and attracted 500 people. But by this time, attitudes had changed—people began to realize that taking a body apart for entertainment was deeply uncool, and though Murray insisted she was doing it for scientific advancement, she faced a lot of criticism from the press.

For ancient Egyptians, protecting the body for eternity was paramount, hence the practice of embalmment and the care that went into it. "These unrolling parties were disgusting really," Johnston says firmly. "Bodies are supposed to be treated with respect—you can't deal with people in that way. I'm happy to play the game of it tonight, but if I was asked to unroll a real mummy then there's no way I could do that."