Postcard from Egypt: the Nubian village trying to protect its ancient culture | The National 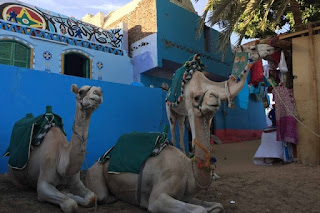 Camels beside the colourful buildings of Gharb Sohail, a Nubian village in Egypt. Courtesy Aya Nader.

Postcard from Egypt: the Nubian village trying to protect its ancient culture

Located along the Nile River, in an area between northern Sudan and southern Egypt is what is left of the ancient Kingdom of Nubia. Here you will find ancient monuments, a displaced population and fresh attempts to bring a rich culture to light.

One of the oldest and richest cultures in Africa, Nubia’s history can be traced as far back as 2,000BC. The last Nubian kingdom collapsed in the 16th century. Now, one Nubian village in Egypt – Gharb Sohail – has become a major tourist attraction and many locals have turned part of their homes into guesthouses. Big halls, a mastaba (a traditional bench built into the wall) an area for women’s gatherings that usually take place after sundown, and a tea area, represent a typical Nubian living unit. Walls are painted with scenes from everyday life or nature. One of the traditional drinks is always at the ready: red tea with basil, hibiscus tea, or strong African jabana coffee.

To reach Gharb Sohail, we travel to Aswan. From there it’s a ferry ride to the Nubian village which sits on a sandy hilltop – a colourful haven of houses painted in blue, yellow, green and red. "I just love how they open their homes for visitors, offering tea, henna and stories," says Leena El Deeb, a Cairo resident.

Henna is an important part of Nubian culture. Prepared from the henna plant, visitors usually leave with tattoos of reddish-brown flowers and geometric shapes. In Nubia, a bride is covered from head to toe in henna art prior to her wedding. Nubians also traditionally made necklaces and bracelets from camel bones. Today, accessories, baskets, perfumes and incense fill the narrow tourist market, along with rows of colourful spices and weavers making pashminas.

"Gharb Sohail has everything, from shopping at the souq to Nubian entertainment shows; the whole package. The people there are very kind and very hospitable," says Sarah Hany, another visitor from Cairo.

Calling it "a place of inner peace", tourist Hagar Gamil enjoys being immersed in ancient tradition, be it among the people, their homes or history.

Crocodiles are also a feature of village life. Floors are covered with flattened sand, especially at entrances. This is a tradition that dates back to ancient Nubia: each morning the homeowner checks for signs of crocodiles or snakes entering the house. Crocodiles were taken in as pets, and their pheromones repelled other intruders. Up to this day, crocodiles still live in some households, albeit a minority and for tourism. On my visit, I saw one in a stone cage.

The Nubian village has attracted visitors for many years but locals believe the 2002 film Mafia, shot on Nubian lands, put the area on the map for Egyptians. Another advocate is Nubian singer "The King" Mohamed Mounir, who established a hotel there named after one of his songs Hadouta Masreya (An Egyptian Tale).

At sundown, Cairo resident Hamed Alazzamy says he goes to a rooftop cafe and takes in the scene. "I thought it was eye opening. To think that people could live so simply while the rest of us worry about silly things".

But the history is not simple. In 1964, the Aswan High Dam was built, submerging villages and leaving more than 100,000 people homeless. Since then, Nubians have been calling for their right to return. Last year, a presidential decree designated a large stretch of land as a restricted military zone. The area, adjacent to the Egypt’s border with Sudan, includes 18 Nubian villages to which residents had hoped to return. Some people from other parts of the area settled in Gharb Sohail.

With today’s population of half-a-million across what is left of wider Nubia, the new generation is well aware of the lack of exposure Nubia has. Their economy depends on the winter tourist season so they have created YouTube channels such as "Nuba Tube", mobile apps and social media platforms to keep the language alive, market their products and showcase their heritage.

As Argentinian travel blogger Valentina Primo, who went three times in a year, told me, "You can find a family away from home; a place so filled with colour, nature, and a surreal sense of community that you won’t feel a stranger. It’s also a place where the Nile shows its best facade, where the sand burns under your feet, and children dance as contagiously as I’ve never seen".

Aya Nader is a freelance journalist based in Cairo.